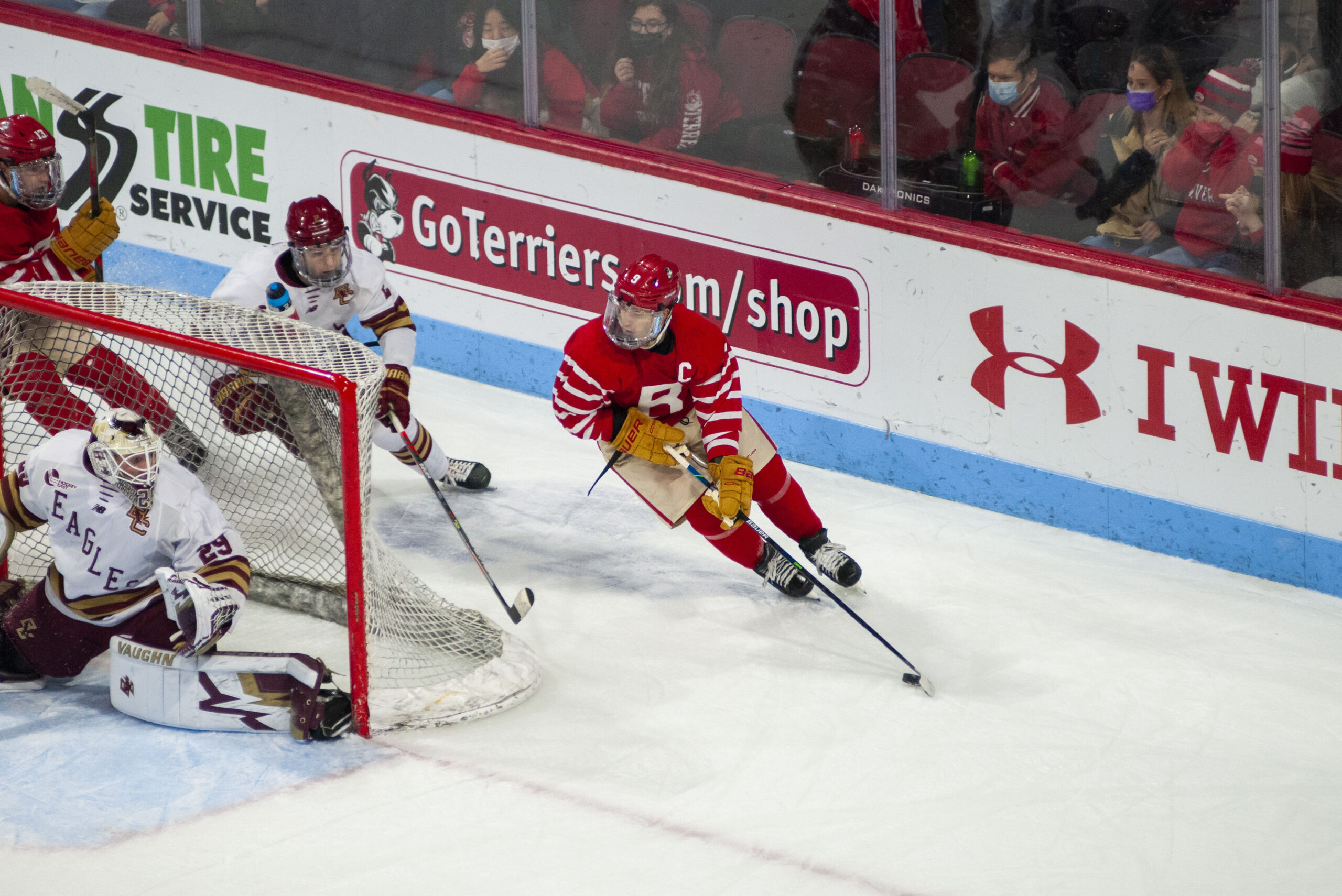 The first and second games of 2022 will allow the Boston University men’s ice hockey team (7-9-3, 5-5-3 HE) to rebound as this long season continues. The Terriers go up against the Arizona State Sun Devils (12-10-0, Independent), who are winners of five of their last six. In four of those games, they bested ranked opponents, including Cornell (9), who beat BU earlier this season at Madison Square Garden. Both of these games, however, will have a BU heavy crowd at Agganis Arena.

“They’ve got a lot of experienced guys, a lot of guys from different programs. I think they’ve done a good job at merging all of their players into what they want to do,” said BU head coach Albie O’Connell.

When it comes to the status of the Terrier roster going into this back to back, there will most likely still be plenty of familiar faces out of the lineup. This is a result of a rise in COVID-19 cases that included a few American cancellations that eventually led to the cancellation of the World Junior Championship.

The tournament’s premature ending robbed BU goalie Drew Commesso the chance to showcase his abilities on the world stage. With the sophomore’s availability for the first game on Friday being uncertain, BU may need to once again turn to Vinny Duplesis, who was very solid in the 5-1 win over Brown on New Year’s Eve.

Duplessis has four appearances this season with two starts, posting a respectable 2.42 goals against average and a .885 save percentage. If Commesso isn’t able to go,  expect Duplesis to be the guy, with Ashton Abel also waiting for another chance to start.

However, despite the cause for concern about the current stability of the roster, O’Connell is optimistic about the usable players going into this series.

“We have a lot more guys than we had last week, which is nice,” said O’Connell. Last week for the Terriers in their game against Brown, multiple players were forced to play out of position due to limited skaters available with just 11 forwards and four defensemen. Forwards Dylan Peterson and captain Logan Cockerill even found themselves logging minutes as defenseman in the win over the Brown Bears.

Whoever is in net must be ready from a very active Arizona State attack. While also being extremely physical, the Sun Devils are seventh in the nation in shots per game, which should make for an entertaining, back and forth game. When outshooting their opponents, ASU is 5-2-0 compared to 6-8-0 when outshot.

“They’re pretty organized in how they play and they play extremely hard. … The 1-on-1 battles will be extremely important,” said O’Connell. Special teams was something that BU’s coach elaborated on and stressed the importance of.

“They play physical and they play hard, so sometimes that ends up putting you in the box. Every time you play a weekend series you have to prep for special teams,” said O’Connell, recalling the sweep BU suffered at the hands of Northern Michigan back in October. “When we took a penalty, the puck was in the back of our net. … We have to make sure we stay disciplined and stay out of the box.”

While O’Connell is correct in acknowledging that the Terriers must limit their penalties, the Sun Devils are the most penalized team in all of college hockey. If you combine ASU’s lack of discipline with a bottom 10 penalty kill unit, it’s a recipe for disaster. This is the main factor for why Arizona State has allowed the second most goals in the NCAA. So it’s safe to expect some fireworks this weekend.

As far as offense is concerned, the Sun Devils have plenty of it. A pair of forwards lead the charge for ASU, with grad student Colin Theisen and sophomore Matthew Kopperud tied for the lead in points with 25 a piece, which is good enough for seventh in the nation. While former NHL player Brian Boucher’s son Tyler didn’t quite work out at BU, Shane Doan’s kid Josh is having a productive freshman season with 21 points (6g, 15a) in 22 games. Sophomore Tim Lovell is pacing all ASU defensemen in points with 14 (4g, 10a) in 21 games.

In net for Arizona State, starts have been split between junior Ben Kraws and sophomore Cole Brady, with the former earning 13 of the 22 starts this season. Both sport goals-against averages over 3.4, with Kraws holding a 3.43 while Brady is near 3.67. Neither goalie breaks the .910 save percentage mark as well.

On the offensive front for BU, there are five skaters with double-digit points entering the second half, albeit with more games played than points. Junior defenseman Dom Fensore leads with 14 points (3g, 11a) and forward Wilmer Skoog is right behind with 13 points (6g, 7a). Skoog shares the team-lead in goals with sophomore forward Dylan Peterson (6-6–12), with Max Kaufman hot on their trail after a Hockey East leading five goals in December.

The Terriers haven’t had much exposure to opponents outside of Hockey East thus far, but have a measly 2-4 record in those games, which they’ll hope to change to an even record after this series against the Sun Devils. With the clock starting to tick on the Terriers chances of an NCAA tournament berth, the time is now for them to turn their season around. With the squad’s talent, the sky’s the limit, but will they limit themselves to a level far beneath expectations? Only time will tell.

Puck drop for the first game at Agganis Arena will be at 7:30 p.m. on Friday night, with both teams returning for a 7 p.m. showdown on Saturday. The Terriers will hope to use the revamped crowd to take down ASU, who are 2-6-0 away from the multi-purpose Sun Devil arena.