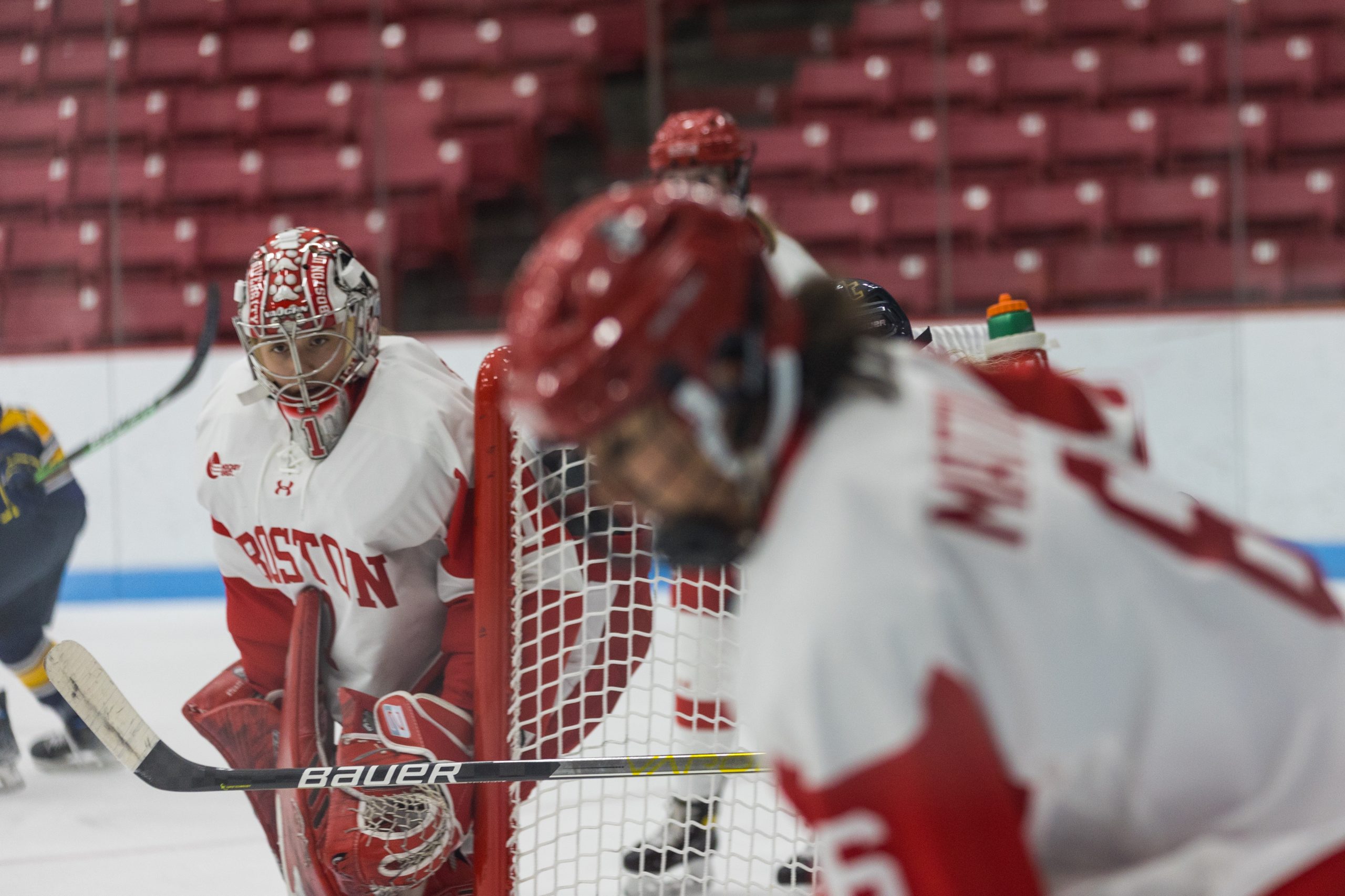 By Stevie Potter and Bobby Serafin

The Boston University Terriers (9-7-4, 8-4-3 HE) had a winless weekend in Pittsburgh at the UPMC Lemieux Sports Complex, suffering a shootout loss to Syracuse on Saturday afternoon, followed by a 3-0 shutout loss to Penn State in Sunday’s consolation game.

It was the second year of the Battle of the ‘Burgh tournament, which brings some of the premier women’s hockey programs to the forefront. This year, the City of Bridges hosted BU, Syracuse, St. Cloud State and Penn State.

In Saturday’s game, the first period saw the Terriers playing with a lot of energy and taking every chance possible to throw the puck at Syracuse’s goal, ending up with a 14-8 shot advantage over the Orange (7-10-4, 5-3-0-1 CHA), but senior goaltender Arielle DeSmet snuffed out every BU effort. Even though she’s playing with a mediocre Syracuse squad, DeSmet holds an impressive .930 save percentage with a goals against average of 2.28.

Despite the early pressure from the Terriers, it was the Orange that drew first blood with a well-worked power play goal 8:31 into the period from senior Abby Moloughney. The Ottawa native, with her ninth goal of the season, now leads the team in both goals (nine) and points (17). The goal was assisted by freshman Sarah Marchand and senior Lauren Bellefontaine, the second and third-highest scorers on the team, respectively.

Parker leveled the score less than a minute later, and the 1-1 scoreline carried into the second period. Syracuse scored twice in the second thanks to tallies from Moloughney and Sarah Thompson.

The Terriers were able to seize momentum right from the third period puck drop. The key theme of special teams continued, this time in an unexpected way. BU, known for their impressive penalty kill, helped their own cause with a shorthanded goal from Haylee Blinkhorn. The junior cashed in on a breakaway for her third goal of the season, with captain Kaleigh Donnelly producing the assist.

The Terriers carried their strong play through the entire period, winning the battle of shots, face-offs, and scoring chances. The well-deserved equalizer came through a surprise source in Martin’s first of the season assisted by Jesse DeVito and Tamara Giaquinto. BU still had just under seven minutes to grab the winner, but couldn’t solve DeSmet, who was even bigger in overtime.

The shootout went four rounds, with senior defender Shelby Calof scoring the lone marker for the Orange in the fourth round to send them into the tournament final.

In the consolation game against Penn State (11-7-2, 4-2-0 CHA) Sunday afternoon, the Terriers looked to get off to quick start, but the Nittany Lions came out strong.

Julie Gough scored just 30 seconds into the game, her ninth of the year, to give Penn State the early lead. While the Terriers played a strong period following this goal, they were unable to score and that anticipated fire was doused.

Shortly into the start of the second period, Martin went to the box and the Nittany Lions went on the power play. With 16:06 left to play in the period, Penn State capitalized o and increased their lead to 2-0 with a goal by captain Natalie Heising, her 13th of the season.

Just a few minutes after, BU had a power play of their own when with 13:26 remaining, Penn State’s Lexi Bedier took a trip to the sin bin. However, the Terriers were unable to make a dent in Penn State’s lead.

Headed into the third, the Terriers were down 2-0, but still held the lead in shots 19-18.

The first special teams opportunity of the period was awarded to BU following Penn State sophomore Maeve Connolly’s penalty, and yet again they struggled to find the back of the net.

The game came to an unfortunate end for the Terriers, as the Nittany Lions were able to stuff one home in the empty net to seal the 3-0 win. Going 0-for-3 on the power play was the downfall for the Terriers this afternoon.

BU hockey will be back in Massachusetts this weekend for back-to-back games against rival Boston College.