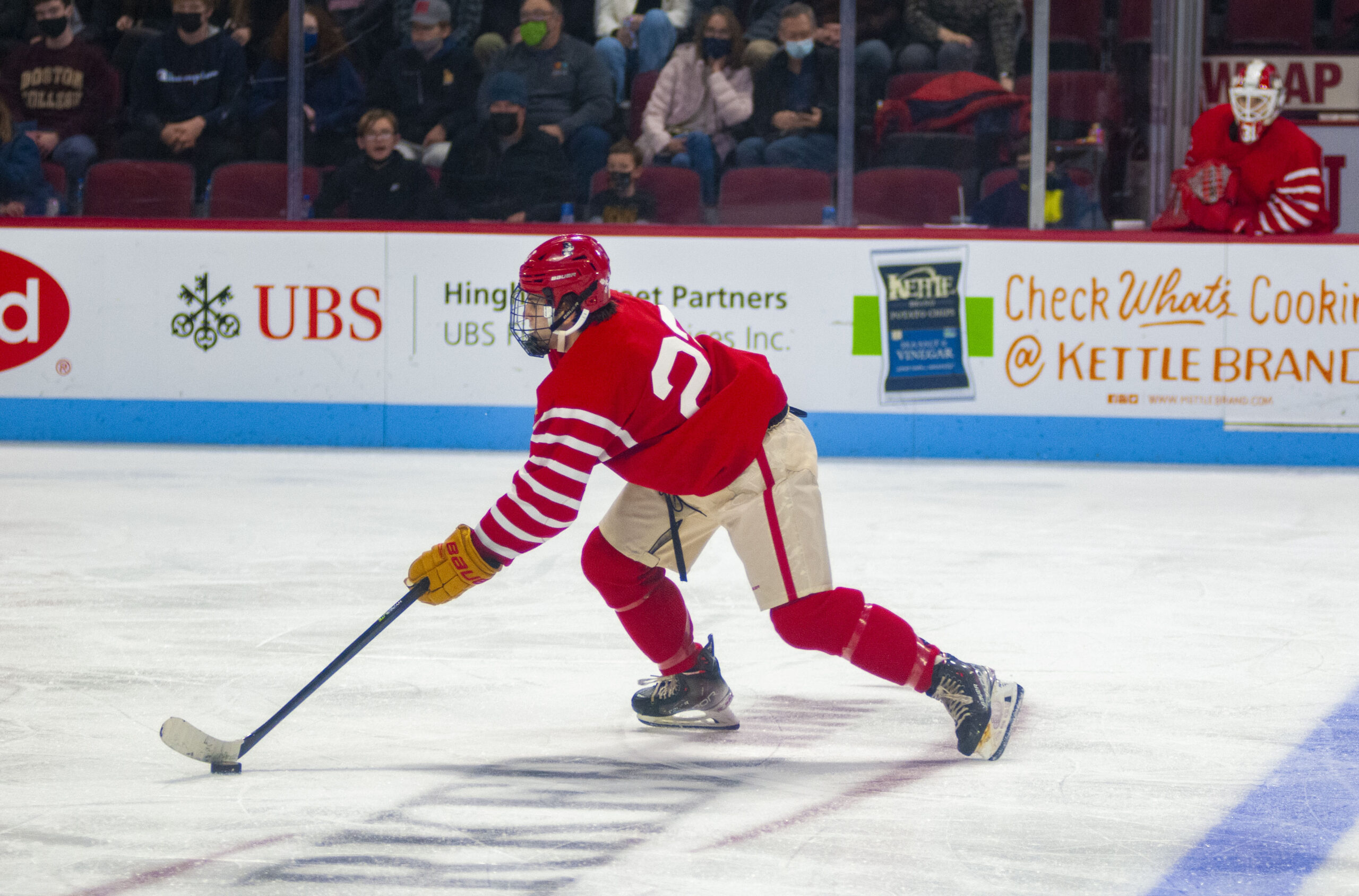 The last game of 2021 will be the first of the second half for the Boston University men’s ice hockey team (6-9-3, 5-5-3 HE). The Terriers will face the Brown Bears (3-9-0, 3-6-0 ECAC) in Providence for a non-conference bout before hosting Arizona State next weekend.

In major personnel news for the Terriers, forward Tyler Boucher, who headlined this year’s freshman class, is moving on after just one semester. The 10th overall pick in the 2021 NHL Entry Draft signed a three-year entry level contract with the Ottawa Senators and is expected to join the Ottawa 67ers of the OHL.

“Tyler wanted to respect our (his family’s) wishes to go to school. He gave it a shot,” his father Brian Boucher, a former NHL goaltender and current hockey analyst with ESPN, said in a Dec. 28 interview with TSN. “He wants to play hockey, and at college when you got two games a week, it can be frustrating at times with the lack of games.”

Boucher, who started the season playing in the top six, has seen his playing time decrease throughout the season, and he ends his Terrier career with three points (2g, 1a) and 34 penalty minutes in 17 games. His 34 PIM leads all players in Hockey East this season.

The Terriers are also expected to be missing starting netminder Drew Commesso, who had been starting in net for the United States at the now-canceled IIHF World Juniors. Assuming he won’t be ready to suit up for the Terriers despite already returning from Canada, fellow sophomore Vinny Duplessis will likely get the start today.

Duplessis has three appearances this year with just one start, posting a 3.17 goals against average and a .878 save percentage. Junior Ashton Abel, who made his first appearance this season in the 4-3 loss to the United States U-18 Team in their Dec. 11 exhibition, is also an option, but Duplessis is the likely starter if Commesso is not ready to go.

Whoever ends up starting will be facing a Brown team that isn’t generating much offense. Scoring just 1.75 goals per game, the Bears rank dead last in offensive production in the ECAC. They’re also allowing 3.25 goals per game, which ranks ninth in the conference.

Senior forward Justin Jallen leads Brown with eight points (3g, 5a) in 12 games. Six other skaters are tied for second on the team with five points apiece, including junior defenseman Luke Krys. His father Mark and brother Chad are both former Terriers.

In net for Brown, starts have been split between freshman Mathieu Caron and graduate Luke Kania, with the freshman earning eight of 12 starts so far this year. Caron boasts a 3.10 GAA (13th in ECAC) and .911 save percentage (8th in ECAC).

Kania is just a tick above in save percentage at .912 across four starts and six total appearances, and posts a 3.25 GAA.

On the offensive front for BU, there are five skaters with double-digit points entering the second half, albeit with more games played. Junior defenseman Dom Fensore leads with 14 points (3g, 11a) and forward Wilmer Skoog is right behind with 13 points (6g, 7a). Skoog shares the team-lead in goals with sophomore forward Dylan Peterson (6g-6a-12p).

Having struggled outside of Hockey East this season, the Terriers could really use a win here to not only improve their 1-4 non-conference record, but also to get the second half of the season on the right track.

Puck drop is 2 p.m. at Meehan Auditorium in Providence, just 10 hours before the ball drops in Times Square.