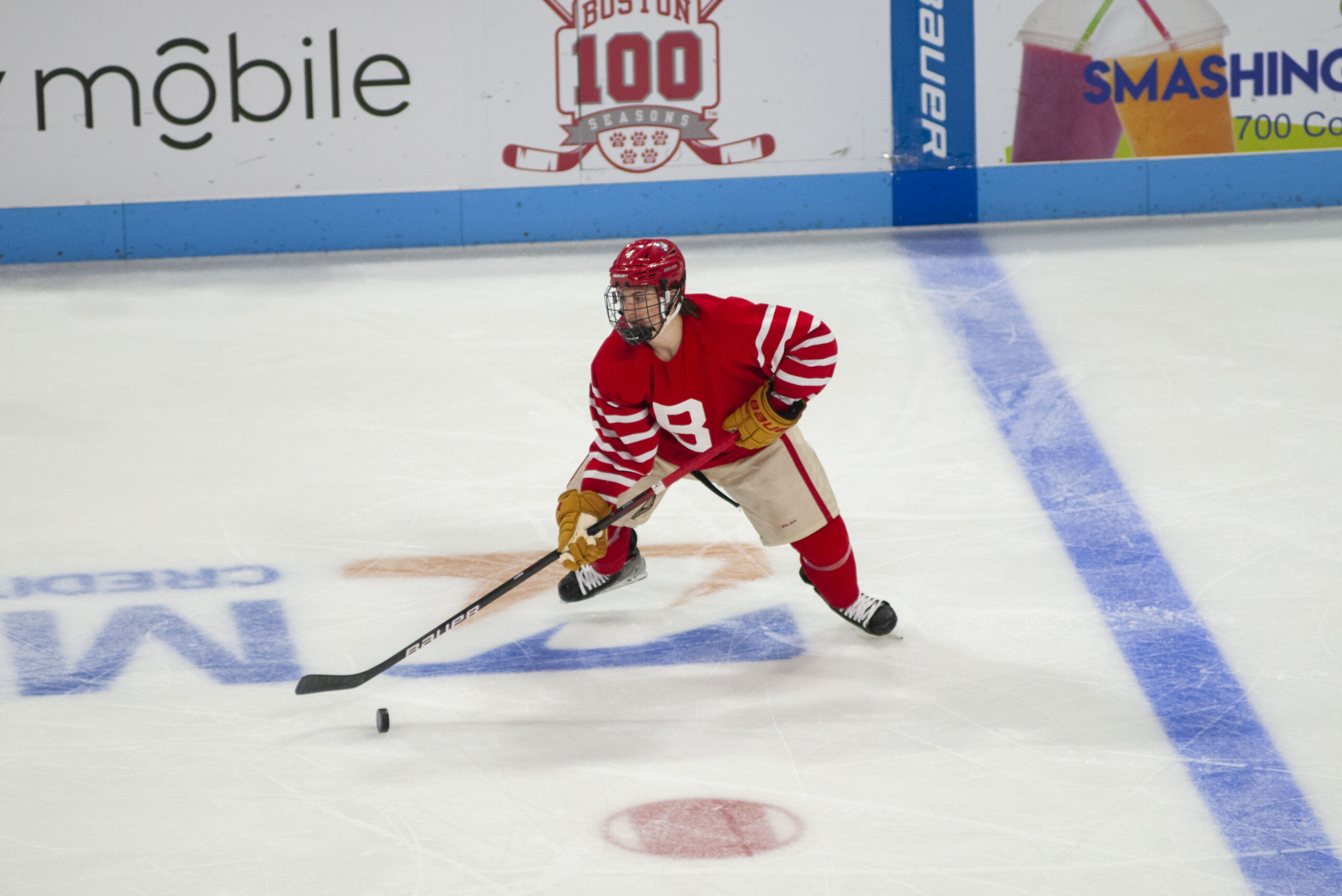 ‘Quinn Hutson secures the victory at Agganis Arena’ will be a welcome headline for the Boston University Terriers in the coming years. Not today.

Skating with the United States U-18 National Team, Hutson and three other future Terriers took down BU 4-3. Hutson iced the game with 6:38 left, making it 4-2 after stealing a puck off Dom Fensore in the Terrier defensive zone. Hutson displayed slick stick-handling to get past BU goaltender Ashton Abel, who made his first appearance of the season.

Hutson and Jack Harvey are both Terrier commits technically too old for the U-18 team, but both were added to the roster for this weekend’s exhibition, joining Quinn’s brother, Lane Hutson, and forward Devin Kaplan.

“They were pretty good,” BU coach Albie O’Connell said of his four recruits skating in the red, white and blue. “I think we’re in a good spot with some of those guys.”

Seven U.S. skaters tallied a point in the victory, and goaltender Tyler Muszelik (New Hampshire) stopped 38 of 41 shots. Juniors Case McCarthy and Robert Mastrosimone had two points each for BU, while Abel made 20 saves in the loss.

A handful of usuals were out of the lineup for varying reasons, including but not limited to Jay O’Brien, Logan Cockerill and Alex Vlasic. Wanting to rest some and with other affected by a sickness moving through the team, O’Connell had to play junior defensemen Sean Driscoll and John Copeland as fourth line wings.

“If you were in our video meeting this morning, you might have thrown on a couple masks. There’s a lot of sickness going around the room,” O’Connell said.

Even with the depleted roster, both teams tried to get creative to open the game, utilizing their speed and spacing to create offense. Long passes through the neutral zone sparked a handful of close chances.

Junior forward Wilmer Skoog had the best chance of the period from the left circle, beating Muszelik but not the pipe. The U-18s tested Abel throughout the period, forcing him to make some tough saves.

A Ryan Leonard (Boston College) interference penalty gave the Terriers the first man-up opportunity of the game. With 3:52 left in the first period, freshman defenseman Ty Gallagher received the puck at the right point position and ripped it through to give BU a 1-0 lead, which carried into the intermission.

Despite failing to convert on their first power play, the U.S. evened things up less than two minutes into the second period, with forward Rutger McGroarty (Michigan) streaking in down the left side and snapping the puck past Abel.

The U.S. took the lead 12 minutes into the second period on a strange sequence that saw the puck fall to Frank Nazar III (Michigan), who had just lost his stick, on a breakaway. Kicking the puck forward and grabbing a teammate’s stick from the bench, Nazar entered the Terrier zone flanked by Brady Berard (Providence).

Nazar dished to Berard, who will soon be joining his brother Brett at Providence, got it past Abel. It was the U-18s first of two shorthanded goals on the afternoon.

The Terriers responded with their best offensive sequence of the period, successfully cycling the puck and getting good looks on net, including a wide-open cage that junior forward Matt Brown couldn’t manage to capitalize on.

“The quick turnaround and going from an electric night to a building that wasn’t that crowded is sometimes a tough mental challenge,” O’Connell said. “I thought our guys, for the most part, put in an effort, but the mental side of it was a little bit lost with some guys.”

Kaden Muir (Northeastern) received a five-minute major and game misconduct for roughing that included contact to the head. Paired with a Sam Stevens roughing minor, the two sides skated 4-on-4 for the final two minutes of the period. The score remained 2-1 entering the intermission, but the Terriers opened the third with three minutes of power play time.

With just 20 seconds left in the penalty time, junior defenseman Domenick Fensore fired on net, hitting a U-18 boot and settling in front of Mastrosimone in the slot. The junior forward collected the puck and rocketed it top shelf to tie the game 2-2.

A Berard hooking penalty put the Terriers on the power play with 13:22 left in the third, but Cutter Gauthier got loose on a breakaway and put the U.S. back ahead less than 20 seconds into the penalty.

“It’s hard to win a game when you give up two shorthanded goals,” O’Connell said.

Hutson’s dagger came shortly after off the Fensore turnover, and a late Matt Brown wrister with the extra skater wasn’t enough to overcome the deficit.

BU enters the winter break 6-9-3, with their next game coming against Brown on Dec. 31 in Providence. O’Connell said he likes how the team has developed over the first half, and is glad the break will allow his team to recover from the sicknesses and injuries currently plaguing them.

“I like our hockey team. I think we’re much improved,” O’Connell said. “Our depth was challenged… so getting those guys back into the lineup and then trying to get into a rhythm as a group is going to be important.”