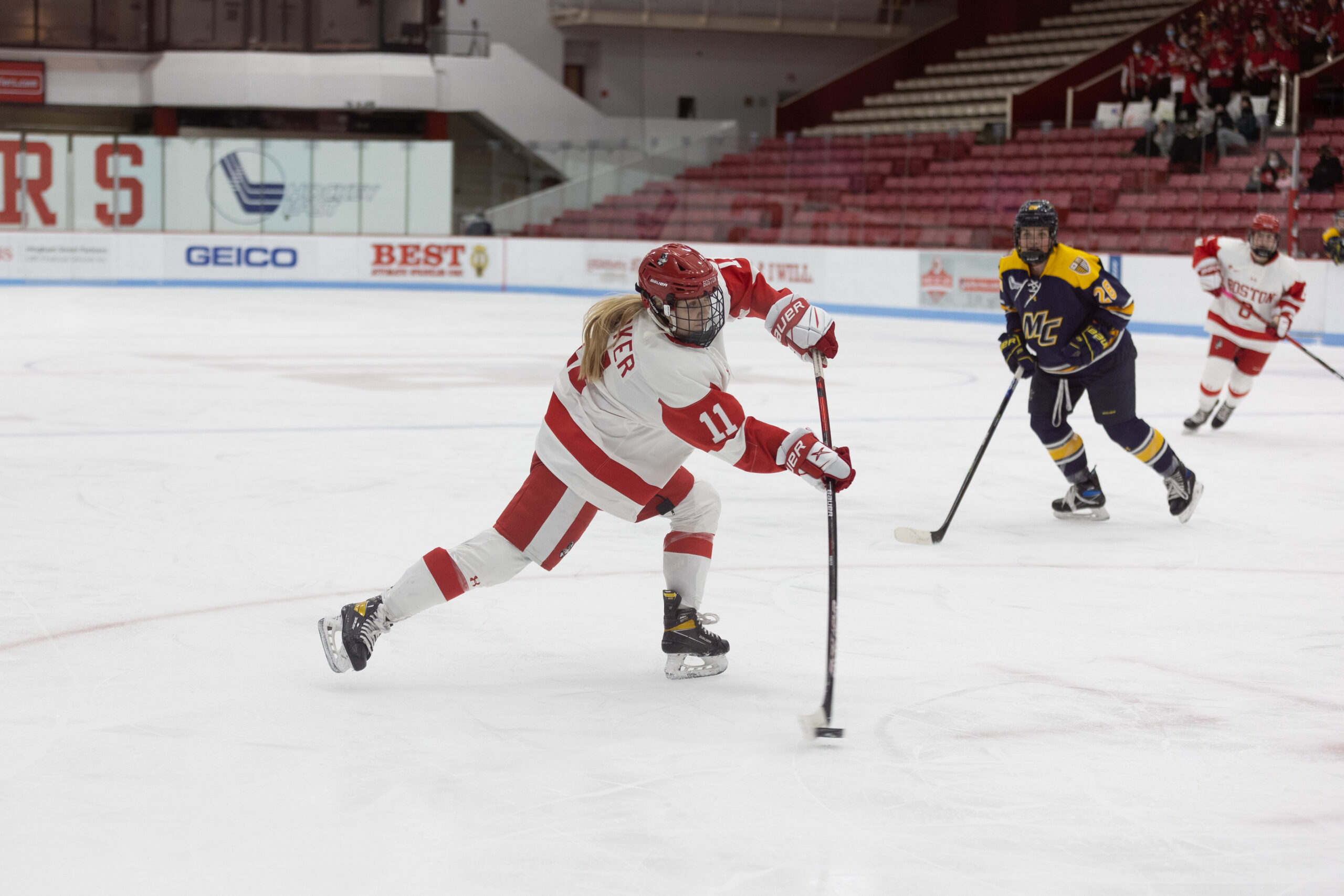 “The girls really did a great job making adjustments last night and then carrying them into today, so it was excellent to see the effort all the way across the board,” BU associate head coach Kirsten Matthews said.

The Terriers opened the game dominating puck possession and limiting Merrimack’s chances, not allowing a shot on goal until 13:18 left in the first period.

The scoring burst open shortly after that first Merrimack shot, with three goals scored between both sides in just over two minutes.

Senior defender Alex Allan got BU started off with a shot from the slot that fell right to her off a rebound from Gorski’s pad. Parker doubled the lead about a minute and a half later, jamming the puck through on the doorstep.

Less than 30 seconds later, Jones got one back for the Warriors, and the scoring settled down from there.

“I love to say ‘keep your foot on the accelerator,’” Matthews said. “They had a great play off the girl’s stick. We could have done a couple things better, but other than that we had played a pretty complete period.”

The Terriers had success getting pucks on net and testing Gorski’s glove, as the junior had a hard time corralling shots and gave up numerous rebounds in front. By the end of the first period, they held a 12-4 lead in shots on goal.

BU continued their offensive dominance into the middle period, the puck barely leaving Merrimack’s third of the ice. By the halfway point, BU had more than tripled the Warriors shots on goal (26-8).

The Warriors still managed to generate the best chance of the period, capitalizing on Terrier breakdown that sent led to a 2-on-0 break towards Stuart. Sophomore winger Hannah Corneliusen received a centering pass that would have given her a clear look to tie the game, but the puck hit her stick and trickled out of reach.

Despite squandering that golden opportunity, the Warriors still tipped the ice and began establishing more offensive zone time, but no goals were scored in the middle frame.

It didn’t take long for the Terriers to pick up some insurance tallies in the third, as senior forward Courtney Correia scored her team-leading tenth goal of the season after junior defender Nadia Mattivi’s shot deflected off her leg and into the net.

Shortly after, sophomore defender Julia Shaunessy got a puck past Gorski, but the goal was called back due to a high stick, keeping it 3-1 until Haylee Blinkhorn put home an Ellie Larson feed from behind the net with over 14 minutes to go.

A handful of penalties in quick succession set up stints of 5-on-4, 5-on-3 and 4-on-3, Merrimack possessing the skater-advantage in all three, but no score came from it.

Down by three, Merrimack put their foot on the gas in the final minutes of the third, generating more offense than they had all game.

It was too little, too late, as BU held on to secure the 4-1 victory. The Terriers will play next on Dec. 8 in a midweek matchup against Yale in New Haven before entering winter break. Puck drop is set for 7 p.m.

“This is a good test for us to be able to go down and play Yale,” Matthews said. “They’re nationally ranked and we’d like to be able to show what we can do here.”