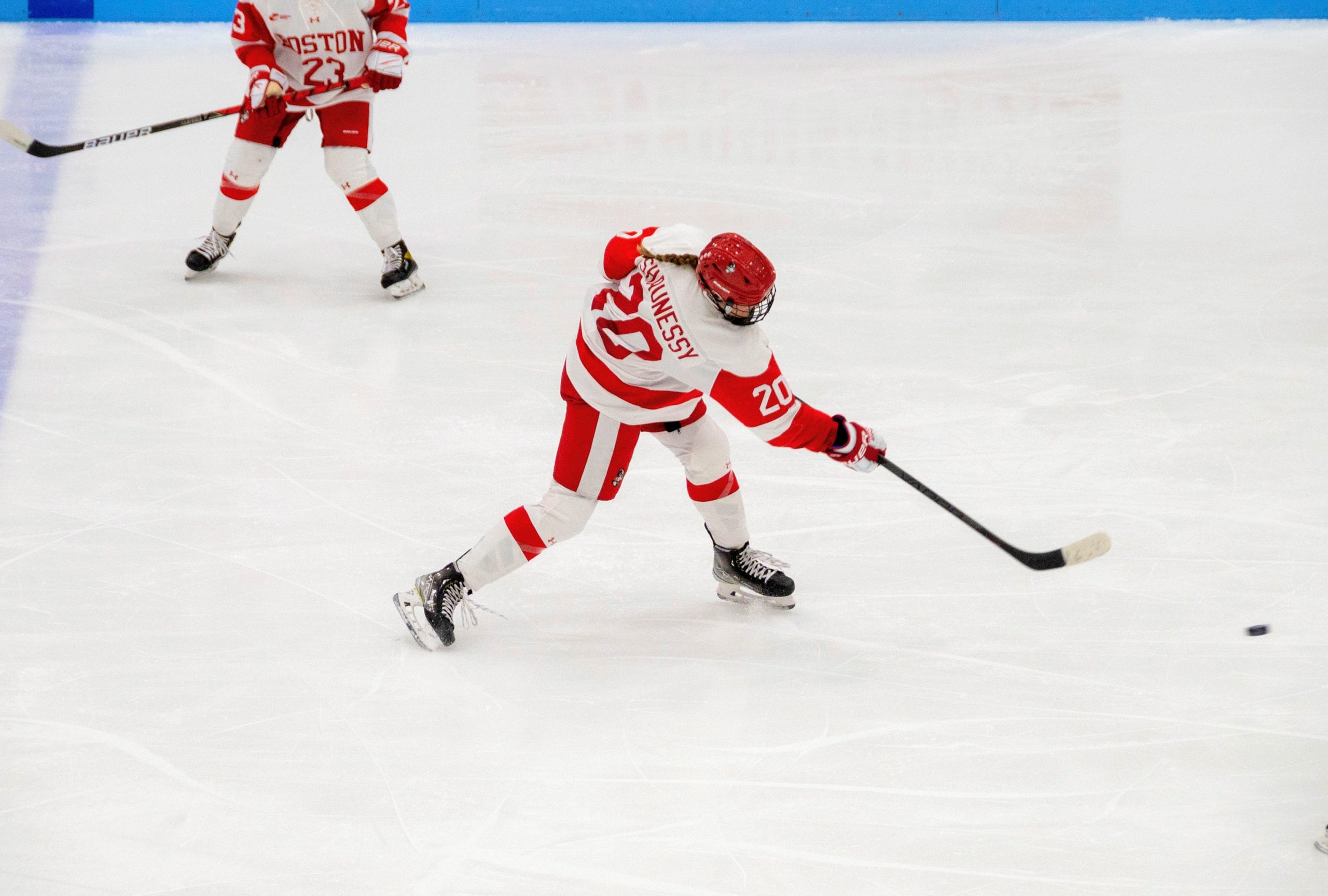 The 2 p.m. game kicked off with an early power play for the Terriers as Merrimack’s Kiki Roust was sent to the box just two minutes into the game for slashing. Unfortunately, the Terriers were unable to produce an early goal on the opportunity.

The first period was quite different from BU’s previous games this season, instead of being a battle of the neutral zone, this afternoon’s game started off with long stretches of zone time from both teams.

The first 20 minutes also featured a lot of physical play that was almost entirely let go until Merrimack’s Alexa Pongo was called for body checking at the whistle for the end of the period.

The stats between the two teams were relatively even at the end of the first, with Merrimack having just a bit of an edge in both shots on goal (11-10) and faceoffs won (8-6).

BU’s skater advantage to start the second period yielded very little action, as they only got two shots on goal. Immediately after that, the Terriers were given a second chance on the power play as Warrior Gabby Jones was called for body checking with 17:48 remaining in the period.

After a loosely run first period, the referees really tightened up on the physicality for the remainder of the game. BU’s power play redemption was cut short just 26 seconds after it started when Brooke Ersoy was sent to the box for body checking.

Merrimack’s Ally Qualley was tripped up during a breakaway, and the Warriors opted for the penalty shot, which was no problem for Terriers’ freshman goaltender Callie Shanahan to prevent from reaching the back of the net.

The two teams headed into the third period with 21 shots on goal for Merrimack and 19 for the Terriers.

With 15:46 left in the game, Merrimack’s sophomore forward Hannah Cornelisen scored the first goal of the game and her first collegiate goal as a Warrior. The shot was redirected off Grace Parker’s stick as she attempted to make a defensive maneuver to stop Cornelisen’s rush.

A handful of penalties continued to be tossed out during the next three minutes of the game. BU’s Julia Shaunessy got two minutes for hooking, MC’s Julia MacLean for hooking, and an unfortunate holding call on Terriers’ Mackenna Parker as she attempted to stop a Merrimack breakaway with no defenders in sight.

Courtney Correia became the Terriers’ third period hero, scoring the tying goal, which was assisted by Ellie Larson, with four minutes left in the game.

Unfortunately for Merrimack, Dominika Laskova was tossed out of the game with under a minute remaining for a hit from behind, ending her night 59 seconds early. Warriors’ freshman Maddie Gagliano served the five minute major in her place.

With just five seconds left, BU’s Emma Wuthrich took a seat in the sin bin for roughing after engaging in some extracurriculars behind the net.

For the second time this season, these two teams would take each other into an extra period of play. Luckily for the Terriers, Shaunessy scored an absolutely beautiful game-winning goal that flew right over goalie Emma Gorski’s left shoulder. The goal was assisted by Nadia Mattivi and Courtney Correia.