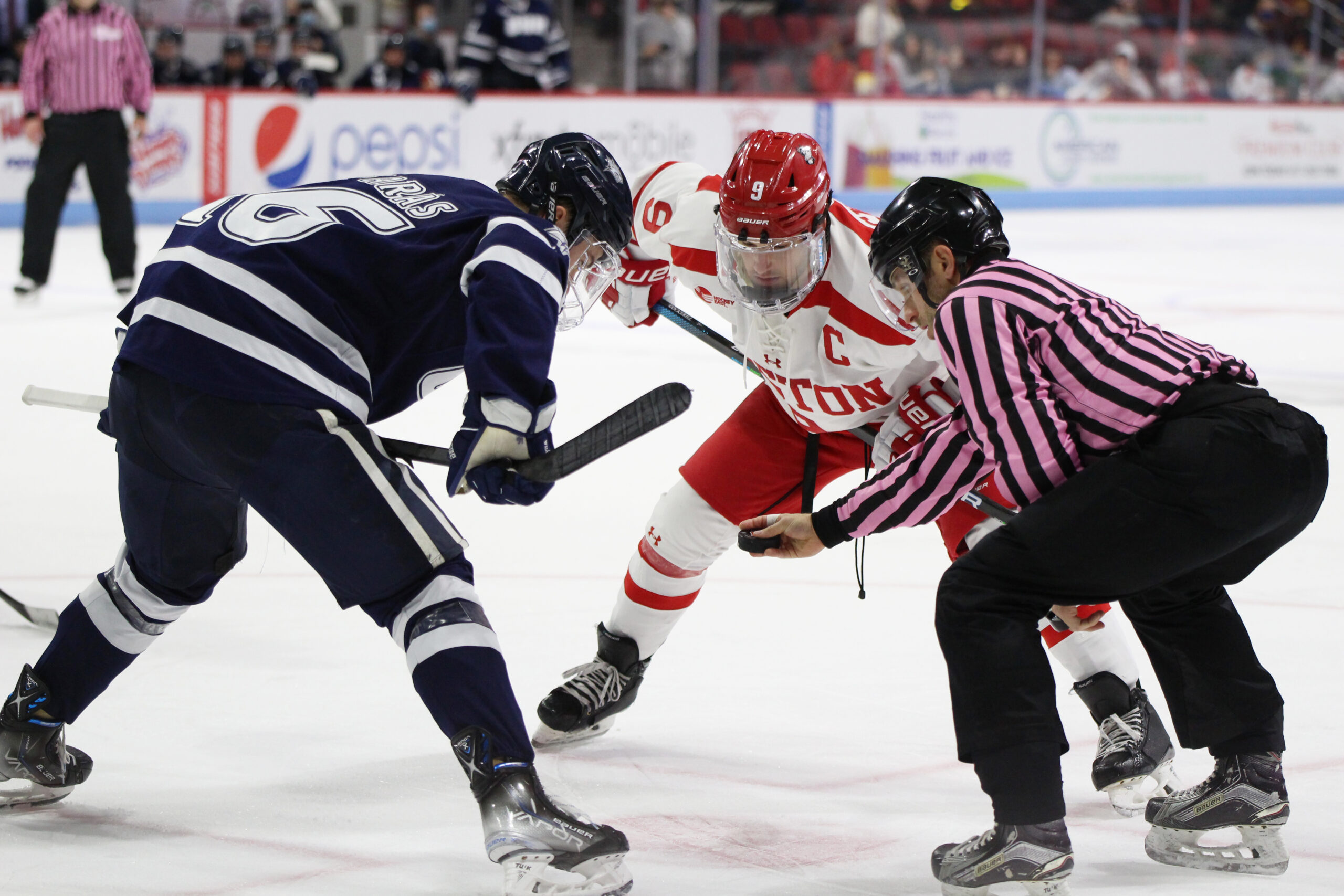 Senior captain Logan Cockerill scored the game-deciding goal, his first of the season, during the second period in a 3-1 win for Boston University against the University of New Hampshire at Agganis Arena on Friday.

“It’s nice to win a hockey game. I’m really happy with the team’s effort,” BU head coach Albie O’Connell said. “Our leaders were tremendous. … We’ve been kind of banging the drum that we have to play harder defensively, and I thought we played a really good defensive game.”

“I thought both teams played hard,” UNH head coach Mike Souza said. “I thought we took some ill-advised penalties. … We had a couple passengers tonight, which is uncharacteristic of us. … It’s hard to win hockey games if you only score one goal.”

Blaisdell gave the Wildcats a 1-0 lead at 5:02 of the first with a sharp-angle shot from the bottom of the left face-off circle.

Here's Blaisdell's early goal for UNH. Tough one to give up all around. pic.twitter.com/A4WfGOTjH6

Freshman forward Will Margel nearly doubled UNH’s lead with a one-timer 29 seconds later, but Commesso came out of his crease to make the glove save.

Here's Wilmer Skoog's equalizer. Perfect shot-pass from Matt Brown right on Skoog's tape, and he redirects it past Robinson. pic.twitter.com/snmKO268Ve

Junior defenseman Vlasic almost gave the Terriers a 2-1 lead at 3:11 of the second after making a move at the blue line and shooting off the far post and in, but the goal was called back after Skoog made contact with Robinson.

“I don’t think [Vlasic] is going to give Skoog a Christmas gift,” O’Connell said,” but [the officials] made the right calls.”

At 11:35, UNH freshman forward Liam Devlin got a five-minute major and game misconduct for slew-footing BU freshman forward Brian Carrabes. After the penalty occurred, the next stoppage in play was not until the 14:03 mark, but the Terriers successfully challenged the play.

Here is the play that got UNH's Liam Devlin a five-minute major and game misconduct for slew-footing. Top right corner of the frame – Devlin collides with Brian Carrabes.

The penalty occurred at 8:25. The next whistle wasn't until 5:57, and BU successfully challenged the play. pic.twitter.com/zkUXmpxLjK

“Our guys on the bench were like ‘that was a slew-foot,’” O’Connell said. “Doug Friedman has the headset, so he called upstairs to Jon Sherman our video coach, and he made the right call, the call of the year. … That was a big one, and it really gave us an opportunity to win the game.”

Souza was confident the officials made the right call.

“When I saw it in real time, I wasn’t sure if it was a slew-foot or not,” Souza said. “I’ve got a lot of respect for [referees] Jeremy [Tufts] and Marty [Hughes]. I think if they had the chance to look at it on video, I’m sure they got the call right.”

Cockerill scored at 13:17 on the ensuing power play. Sophomore forward Dylan Peterson tried to deke in the slot, and the puck bounced right to Cockerill at the side of the net. The captain made no mistake.

Here's Logan Cockerill's first of the season. Peterson tries to make a move in the slot, but the puck goes right to Cockerill at the side of the net. pic.twitter.com/rqMJUNUw4H

“It’s a breath of fresh air,” Cockerill said. “Production-wise, I haven’t been playing great. … I had a talk with Jay [Pandolfo], and he said ‘just keep it simple. It’s going to come at some point. It has to.’ It did tonight, and it felt really good.”

O’Connell said Cockerill capitalizing on the major penalty was the turning point of the game.

“It’s great to see [Cockerill] score,” O’Connell said. “He’s been working so hard. There’s a lot of pressure to be the captain here. He wears a lot of hats in the locker room, but he’s also worried about playing his own game. He’s had plenty of chances. … I’m hoping that can loosen him up a little bit. I’m really happy for him.”

Kaufman nearly gave BU a 3-1 lead at 17:09, redirecting Vlasic’s wrist shot, but UNH successfully challenged for offside. He did, however, score his first of the season with an empty-net goal at 19:32 of the third after blocking a shot in the defensive zone.

“It’s nice to see [Kaufman and Cockerill] score, and get a couple breaks going their way,” O’Connell said. “We did a great job blocking shots. That was a major factor in the game.”

BU will travel to the Whittemore Center in Durham, N.H., tomorrow night for a rematch with the Wildcats. Puck drop is set for 7 p.m.