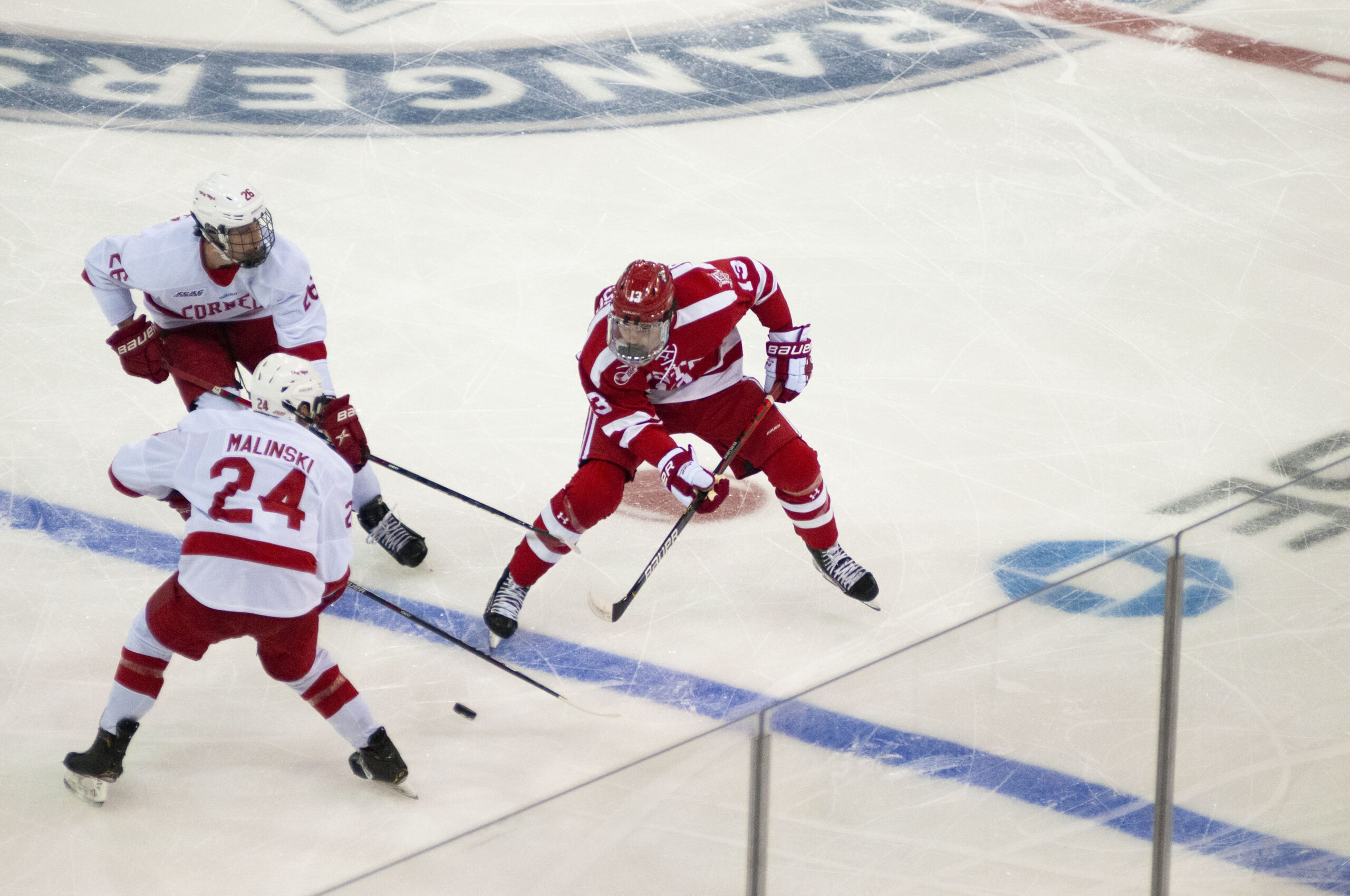 NEW YORK – When Case McCarthy scored off a cross-ice feed from fellow blue liner Dom Fensore, putting the Boston University Terriers (4-9-2, 3-5-2 HE) within a goal of the No. 10 Cornell Big Red (8-1-0, 5-1-0 ECAC) near the end of the second period, it appeared as if the tide was turning.

Playing in famous Madison Square Garden for the eighth edition of Red Hot Hockey, down 4-3 entering the final frame, BU had 20 minutes to tie the game. Instead, the Big Red continued their hot hockey, scoring two third period goals to ice the game and win 6-4.

“(Cornell) is not a team that’s gonna beat themselves, you’re gonna have to beat them,” BU head coach Albie O’Connell said. “I’m not saying we beat ourselves, but there were some moments in the game where we put ourselves in a spot that we beat ourselves.”

Terrier defenseman Alex Vlasic led the Terriers with two assists, and the Big Red were led by defenseman Sam Malinski and forward Brenden Locke with a goal and assist each. Cornell netminder Joe Howe made 27 saves in the win, while BU goalie Drew Commesso stopped 23 of 29 shots.

Chalk it up to MSG jitters if you must, but play started off sloppy on both sides for the first five minutes. A handful of mistimed passes broke up any momentum, but Cornell soon settled in the offensive zone, putting four shots on goal before BU had one.

The Big Red parlayed that initial pressure into the opening tally, with defenseman Sebastian Dirven receiving the puck off an offensive zone draw and firing from point position. Freshman winger Kyler Kovich got his stick on the shot and deflected it past Commesso to put the Big Red up 1-0 just 7:00 into the game.

It didn’t take long for Dylan Peterson to knot things up. The sophomore forward collected the loose puck on the left circle and bodied his way to the doorstep, where he slotted the puck past Howe and got BU on the board midway through the period.

The Terriers’ first power play opportunity came and went without a score, but shortly after freshman forward Brian Carrabes streaked into the offensive zone and ripped a high shot past Howe’s stick side to give the Terriers a 2-1 lead.

The lead was short-lived as Cornell responded less than two minutes later, this time freshman forward Ondrej Psenicka knocking in a bouncing puck to tie things up again.

A Luke Tuch cross check in the dying minutes of the opening frame put the Big Red on their first power play, and Max Andreev scored to put Cornell up 3-2, a lead that carried into the first intermission.

“I thought the biggest thing we did well was continue to learn how to win,” Cornell head coach Mike Schafer said. “Things just weren’t smooth as far as the whole game was concerned, but the belief on the bench that we were going to take care of things was there.”

Cornell dominated the offensive zone possession to open the second, but it wasn’t until a BU defensive zone turnover that they capitalized again, as senior captain Brenden Locke strolled right in and put the Big Red up 4-2 at 10:17 in the second period.

The two sides traded power play opportunities as the middle frame drew on, but it wasn’t until the teams were skating 4-on-4 that Fensore connected with McCarthy to make it 4-3 before the second intermission.

The two sides traded chances to open the third period, but Big Red defenseman Sam Malinski made the Terriers look silly just 3:40 into the final frame. The junior put on a stick-handling clinic en route to Commesso’s net, beating him high to give Cornell a 5-3 lead.

“I just kinda saw (the defender) open up his hips and this little lane to the middle,” Malinski said on how he approached his highlight plays.

The Big Red and Terriers continued to exchange man-up opportunities, with each side generating solid chances, but junior forward Ben Berard delivered the dagger for Cornell, beating Commesso high from behind the right circle with 4:36 left in the game to make it 6-3.

Tyler Boucher added a consolation goal with less than a minute to go, but it was all for naught as Cornell clinched their third-straight Kelley-Harkness Cup.

BU faces a home-and-home against the University of New Hampshire next weekend, while Cornell faces a weekend road trip against St. Lawrence and Clarkson.

“I liked our effort,” O’Connell said. “I like the way we’re trending… I thought it was kind of a back-and-forth game, and I thought they (Cornell) were a little more opportunistic.”