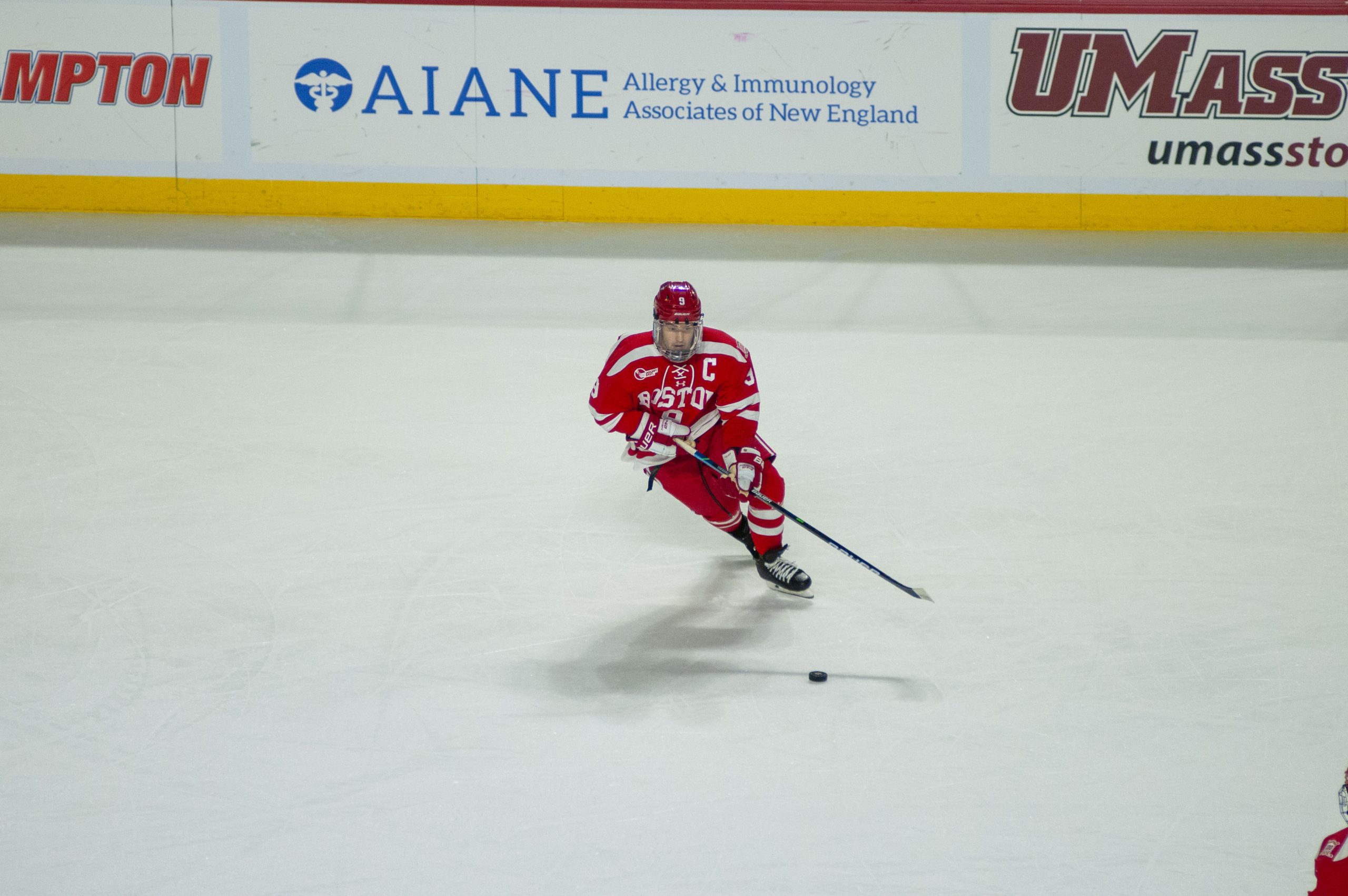 Less than a minute into the extra period, Northeastern winger Aidan McDonough intercepted a pass from BU forward Jay O’Brien in the Huskies defensive zone and turned up ice for a two-on-one rush up ice.

The junior from Milton, Mass., took it all by himself up the right side and called his own number, beating Terrier goaltender Drew Commesso on his stick side to seal the win.

Levi stood on his head in the 38-save shutout, while Commesso stopped all 15 shots that came before the overtime winner.

BU head coach Albie O’Connell praised Levi’s performance, but stressed he felt the Terriers could have put more pucks on net and failed to capitalize on a handful of golden opportunities.

“We had some good chances. We had a pipe that beat [Levi] clean and we missed a couple wide,” O’Connell said. “We had some glorious opportunities to go up one, and maybe two goals.”

Northeastern forward Johnny DeRoche was notably back in the lineup for the Huskies for the first time since Oct. 15. The senior is facing sexual assault allegations that surfaced in April from his time with the University of Vermont.

“No comment on that,” Northeastern head coach Jerry Keefe said regarding his decision to play DeRoche amid the allegations. “That’s not something I can talk about.”

To open the game, the Terriers dominated the first seven minutes with offensive zone time, putting up 13 shot attempts before the Huskies could get one.

Levi showed early why he’s the top goaltender in the conference this year, stonewalling freshman forward Brian Carrabes on a clear breakaway chance 5:30 into the first period. On a defensive miscommunication, no one was in Carrabes’ zip code when he entered the zone.

The Terriers maintained their up-tempo play, barely letting Northeastern establish any offensive zone presence until around the 14 minute mark of the first, with play evening out for the final minutes of the period.

Commesso made a highlight save of his own at 17:32 when an Ethan Phillips defensive zone pass was intercepted by Northeastern’s Jack Hughes, who had plenty of space to rip a shot from the slot. The sophomore netminder used his glove-side blocker to direct the puck out of trouble.

By the end of the first, no penalties had been called, but BU led 14-3 in shots on goal.

The first penalty of the game came just 1:10 into the second when Northeastern’s Jayden Struble was called for holding, but the Terrier power play couldn’t convert on their first attempt.

The Huskies offense came to life to open the second, but a handful of acrobatic Commesso saves kept the red lamp off.

The Terriers, on the other hand, shot themselves in the foot rather than at the net. A couple of breakaway chances were thwarted by the skaters holding on to the puck for too long and rolling behind the net.

“We’re oh-and-eight on breakaways for the year. If we’re 50/50, we might have a couple more wins,” O’Connell said. “And on those eight breakaways, we’ve only managed to get off two shots, because guys think it’s a stick-handling clinic.”

In the final minutes of the middle frame, a couple of Ty’s had a chance to break the tie, but had no luck as freshman forward Tyler Boucher whiffed on the doorstep following a pass from behind the net. With less than a minute left before intermission, senior forward Ty Amonte’s shot on a similar set up that hit the aforementioned pipe and rang out.

Northeastern got their first man-advantage of the night early in the third, but the Terrier penalty kill, helped by Commesso using his glove and blocker in two separate tough saves, kept the game scoreless with 15 minutes to go.

BU regained its offensive momentum from the first period and peppered Levi with shots down the stretch, but after 60 minutes, no goal was scored and the game went to three-on-three overtime, where McDonough ended the game

“Tip your cap to their team. They were resilient the entire night,” O’Connell said of the Huskies. “They didn’t break. Part of the reason they didn’t break was their goalie in some of those chances, so look forward to having another game tomorrow.

That game tomorrow will start at 7 p.m. at Matthews Arena.