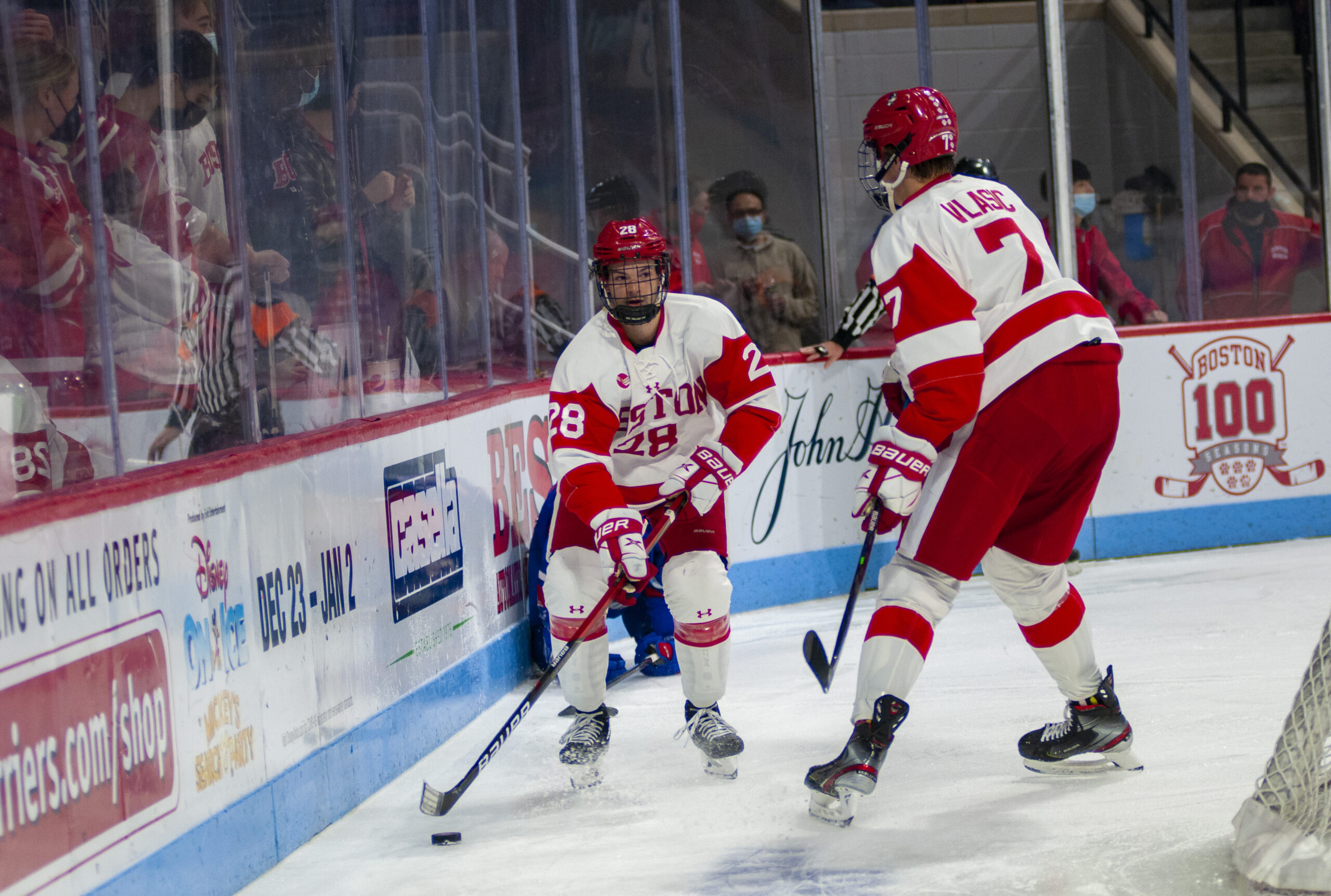 Following sweeps at the hands of UMass Lowell and Northern Michigan, the Boston University men’s ice hockey team sits at 3-7-0 (2-4-0 HE) on a season beginning to spiral out of control. Already struggling to pick up wins in the early stages, a gauntlet of northeast hockey powers lie ahead of the schedule that will carry the team into winter break.

It all starts this weekend with a home-and-home series against the No. 8 University of Massachusetts Minutemen (6-2-0, 4-0-0 HE). The defending national and Hockey East champions are riding a four-game streak of their own — except this one is of wins. If you don’t count their exhibition loss to Dartmouth on Oct. 23, then their win streak is actually six games.

“We look forward to get back into league play,” BU head coach Albie O’Connell said. “[UMass is] on a little hot streak; we’re in a little ‘not’ streak.”

Last weekend, UMass completed an impressive sweep over the then-No. 7 Providence Friars, in which graduate goaltender Matt Murray backstopped a 28-save 1-0 shutout on Nov. 5 before the Minutemen offense sprung to life the following night in a 5-1 victory.

Murray’s 2.13 goals-against average and .933 save percentage both rank third among Hockey East goaltenders, while the team as a whole is scoring 3.1 goals per game (t-4th in HE) while allowing just 2.1 (3rd in HE).

Senior forward Bobby Trevigno leads the Minutemen in scoring with nine points (3g, 6a) in eight games. He’s followed closely behind by junior forward Cal Kiefiuk (3g, 5a) and freshman defenseman Scott Morrow (3g, 5a), who each have eight points. Sophomore forward Josh Lopina also has five points (3g, 2a) in as many games.

Despite the vastly different direction of each team’s season so far, the Terriers memorably swept the Minutemen the last time these teams faced each other. A 4-2 victory on Jan. 17 was followed up by a 4-3 overtime win, the winning blast coming from departed defenseman David Farrance.

“I think we’re just gonna have to be really ready to skate,” O’Connell said, reflecting on last year’s victories entering this weekend. “They’re highly competitive, especially at both nets. ‘They’re in your face’ type team, so we have to be ready.”

The Minutemen did not lose a single game after that series en route to the program’s first national championship, and after stumbling out of the gates against Minnesota State to open the season, have looked strong ever since.

The Terriers, meanwhile, are being outscored 3.5-2.5 on average through 10 games. Juniors Wilmer Skoog (4g-5a-9p), Robert Mastrosimone (5g-3a-8p) and Domenick Fensore (2g-5a-7p) top the scoring leaderboard so far this season.

Coming off a rough weekend in Marquette, in which the Terriers allowed four goals on the first six shots in the Friday game, then allowed four power play goals on Saturday, O’Connell and his staff worked in defensive changes this week at practice.

“We did a not a good enough job last week as a coaching staff. I think there was confusion in a couple of situations,” O’Connell said.

The Terriers will have to fix those misunderstandings if they want any chance against a red-hot Minutemen team. The puck drops Friday night at 7:30 p.m. at Agganis Arena before the series shifts to Amherst for a 7 p.m. start on Saturday.