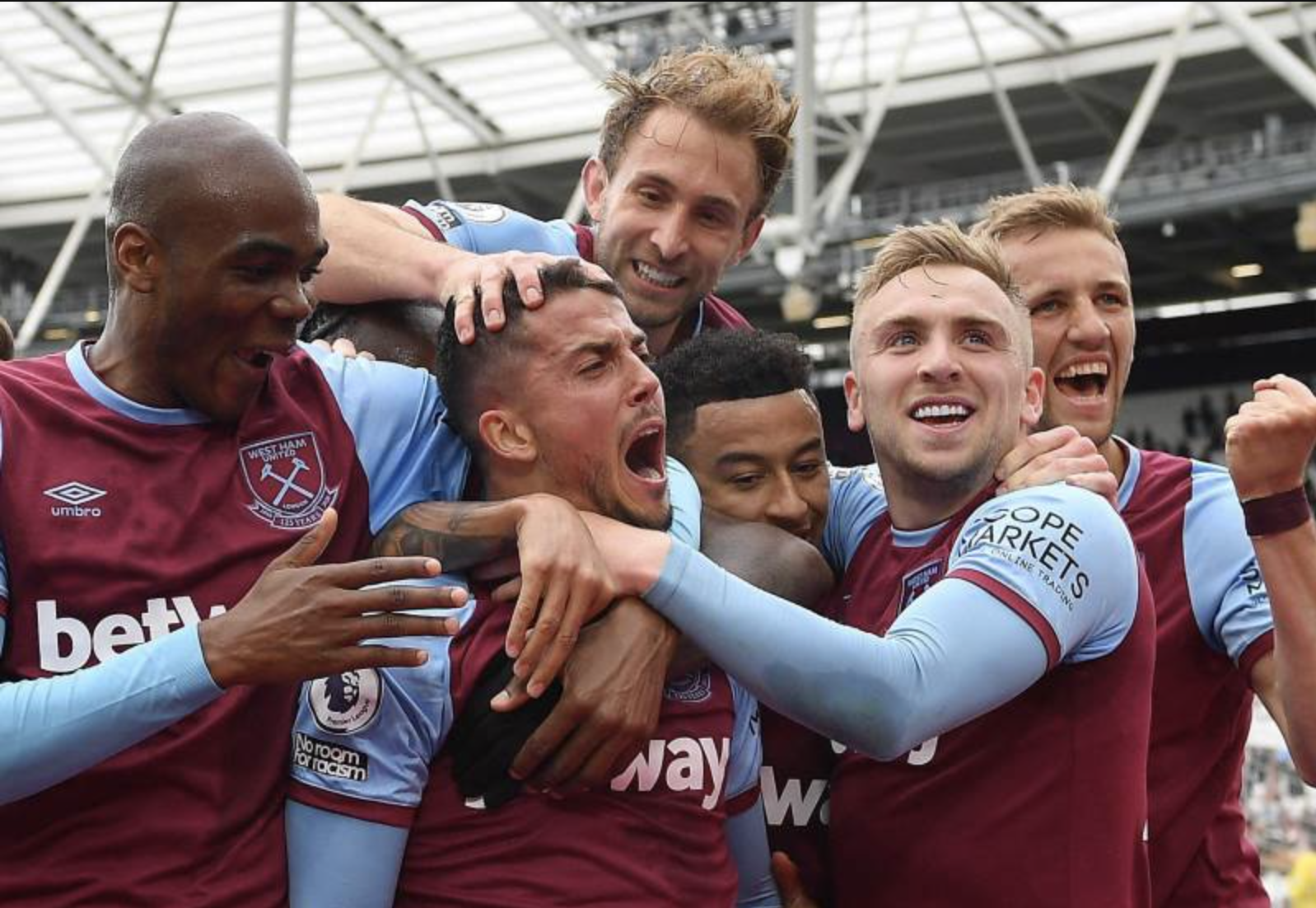 Featured Image via Inside Futbol

When West Ham United were sitting in the relegation zone in March 2018, and a field invader planted the corner flag in the center of the field marking his protest of the club, West Ham made headlines for all the wrong reasons.

After their home for over 100 years was knocked down, and were then forced to move to the London Olympic Stadium, West Ham fans had every right to feel as if the club they knew and loved was gone. A change of the badge, an ownership which seemed to favor profit over success, and an underwhelming team, all caused for a troublesome few years in East London.

When faced with relegation in 2018, the club appointed Scottish manager David Moyes. Moyes had a lengthy and successful spell at Everton, before becoming the successor to the greatest manager to ever live at Manchester United in Sir Alex Ferguson. Moyes’ time at United was an abomination. Only lasting nine months before getting sacked, Moyes’ image, which he had built up over 15 years was well and truly tarnished. Moyes then moved onto two unsuccessful spells as he was relegated with Premier League club Sunderland, and sacked within a few months from the Real Sociedad job in Spain.

It was at this point, West Ham appointed Moyes, and the reaction from the fans was not a welcome one. Fans complained once again at the lack of ambition shown by the board and were not happy with the out-of-touch Moyes as the man to keep the team in the Premier League.

Nevertheless, Moyes managed to keep West Ham in the top flight at the end of the 2017-18 season, and was relieved of his duties after his six month contract was up. West Ham then moved on to former Real Madrid and Manchester City coach Manuel Pellegrini.

Pellegrini spent a boat load of money in his first season at the club and the Hammers finished 10th. The next season did not start well for Pellegrini and he was sacked at the end of 2019. With the East London club once again sitting in a spot of peril, the board looked to Moyes once again to help them out. The reaction of the fans to the reappointment of Moyes did not go over well. Another backwards step was the message voiced from the fans. Yet, it seemed like if the Hammers had any chance of staying in the league, Moyes would be the man to get them over the line.

The first three months of Moyes’ second tenure were mediocre, and West Ham sat just a point above the relegation zone in March 2020 before COVID-19 put the Premier League on standby. As the remaining nine games loomed over the heads of all West Ham fans, doubts over whether Moyes could get West Ham playing well enough to keep them in the division remained.

With no fans in the stadiums, it would be solely down to Moyes and the players to stay up: which they did. Signature wins over Chelsea and Watford saw the Hammers maintain their Premier League status for another season. However, this time, Moyes was going nowhere.

The opening fixtures of the 2020-21 season were not kind to West Ham, and many, including myself, predicted they would be in a relegation scrap right from the start of the season.

However, results began to shift. Big wins against Wolves and Leicester kick started West Ham’s season and fans were hopeful again. The defining moment in the fortune of both David Moyes and West Ham United came against London rival Tottenham Hotspur.

Tottenham were in good form and came out of the blocks quick. They stormed out to a 3-0 lead and West Ham looked shocked. The game came to the 82nd minute before a header from Fabian Balbuena got the Hammers back on the scoresheet. A consolation goal was all that was thought of the Paraguayan’s header. However, just two minutes later, a West Ham cross was put into the Tottenham net for an own goal and it was 3-2. Heading into stoppage time it looked like West Ham’s efforts were futile. But, in the last minute of stoppage time, the Irons had a free kick to potentially salvage a point. A free kick was swung in by Aaron Cresswell and found its way to Manuel Lanzini, who spectacularly unleashed a half volley from outside the box into the top right corner, sending Moyes and the West Ham players into delirium.

From this point on, West Ham were a different team. You could see the joy and elation on every face of the West Ham players and it was clear there was a bond and spirit amongst the group.

The rest of the season brought gritty performances, wonder goals, and the introduction of a starlet. When Jesse Lingard was brought in on loan in January from Manchester United, many questioned the signing from Moyes. Lingard had publicly been going through a rough patch in his career and it seemed West Ham needed a striker far more than an attacking midfielder.

How wrong were we. Lingard went on to score or assist in almost every game he played for the East London club, with his performances propelling West Ham into sixth place, earning a spot in next season’s Europa League.

With fans back in the stadium for the last game of the season, there was nothing but joy on the faces of all Hammers fans. Thanks to the incredible work of Moyes and the resilience and quality of his players, a once relegation-threatened team was becoming a threat to the rest of the league.

This momentum carried forward into this season as West Ham continued their fine form. The statement victory over Liverpool this weekend saw them leap over the Scouse club into third place in the Premier League after 11 games. To beat a team of the stature of Liverpool is incredible. The manner of the victory saw resilience, as well as quality, which have been shown throughout the team’s successful last 18 months.

All of a sudden, the media and the Premier League viewed West Ham as a genuine top four contender. It was at this moment I realized how much of an inspiration this manager and this group of players were to football, and sports in general.

David Moyes was a joke. A laughing stock of world football. The target of hatred from fan bases. He even successfully fulfilled his task at West Ham initially, and not even their fans were happy to see him back. But what Moyes never did, was give up. Despite all the odds stacked against him, despite the fact that his name and reputation had been humiliated, he focused and got to work. He turned a group of lackluster players, and a fan base which had been plagued with years of disappointment, into a group which is bursting with hope and positivity.

As a West Ham fan myself, I used to find the beauty of being a fan of the club in the fact that we were never consistently a good team. The times we did play well and got victories were made that much more special due to the struggles we had endured previously. This beauty I find in West Ham is a microcosm for the success David Moyes is experiencing currently. He experienced lows no manager had ever experienced before, received abuse like no other, yet now, because of his hard work and dedication, is in a position so positive and so rewarding, that no other person will ever be able to understand it. And that is what sports is all about.

Sports aren’t great because you win every week, or win the title every year. They are great because you are able to feel the elation of bouncing back from hardship, and reaping the benefits of hard work and learning from your mistakes. This West Ham team and West Ham fanbase have known nothing but struggle and hardship over the years, and that is why there is a togetherness amongst them now. They are experiencing something which is unique to each and every player in that dressing room and there is a desire which has been instilled by David Moyes which drives them on further and further.

Who knows where West Ham will end up at the end of the season. One thing we do know however, is that this group of players, and this manager, will do everything to make their fans proud, and there is not much more you can ask than that. The togetherness and team spirit present should be a model for any team in any sport in the world. West Ham currently are truly a club United.