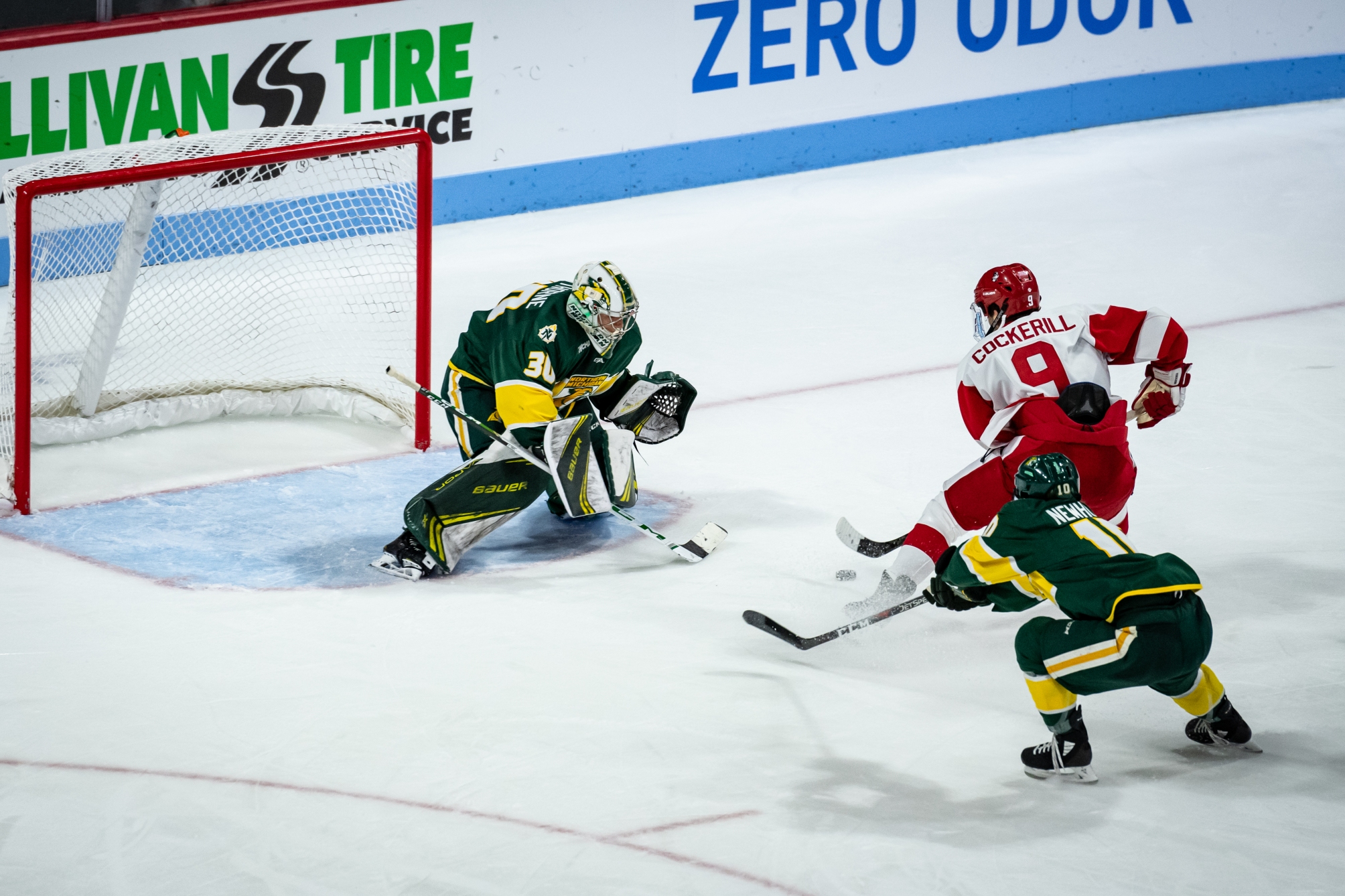 The Boston University Terriers (3-6-0, 2-4-0 HE) allowed three goals within the first 12:20 in their Friday night matchup against the Northern Michigan Wildcats (3-5-0, 2-4-0 CCHA), and despite fighting back to make it a one-goal deficit late in the third, couldn’t complete the comeback and ultimately lost 5-3.

The Wildcats got on the board first. A turnover in the defensive zone led to a bunch of cycling. Eventually, Tanner Vescio was left open and beat Commesso high just 3:58 into the first.

The Terriers struggled to maintain possession, and a deep turnover from Domenick Fensore left Commesso no chance as Northern Michigan doubled their lead 9:20 into the frame thanks to Joseph Nardi.

Less than a minute later, Tyler Boucher forced a turnover on his own and found a wide-open Jamie Armstrong on the flank, but Armstrong’s shot went wide.

Things went from bad to worse when Nick Zabaneh got called for tripping 11:56 into the first. An AJ Vanderbeck wrister less than 30 seconds into the advantage made the score 3-0. It was Vanderbeck’s third power play goal of the season.

After the third goal, Commesso was pulled and replaced by sophomore backup Vinny Duplessis. The Wildcats shortly went back to the power play after Boucher charged the goaltender. A Vanderbeck high stick 25 seconds later made it four-on-four with just under six minutes left in the period.

A few minutes after both penalties were killed, a Connor Marritt high-stick on Dylan Peterson sent the Terriers to the man advantage, where Robert Mastrosimone put the Terriers on the board 16:39 into the period.

The Wildcats scored on the power play again following a Max Kaufman hold, with Hampus Eriksson beat Duplessis for the Quebecois’ first goal allowed of the night with less than 90 seconds left in the period.

“Never gonna win a hockey game if that’s the case,” O’Connell said of the team letting up four goals on just a handful of shots in the first period. “You’re gonna have a really tough time.”

Times got even tougher to open the second; it took just 54 seconds for the Terriers to go back to the penalty kill, as Fensore was called for slashing.

Just over midway through the period, the Terriers led the shots on goal count 13-7 despite being down 4-1, dominating offensive zone time in an effort to crawl their way back.

With 7:10 left in the second, Wilmer Skoog and Mastrosimone reconnected for their second assist and goal of the night, respectively, to cut the deficit to two. A secondary helper from freshman defenseman Braden Doyle marked his first collegiate point.

“That was the best he’s (Doyle) played yet, so he was a bright spot,” O’Connell said.

The score carried over into the third period. A handful of penalties to either side came and went without any score.

The Terriers gained momentum after a Vescio interference penalty, and 39 seconds after the penalty expired, Case McCarthy scored to make it 4-3 with 6:49 remaining in regulation.

BU battled to tie the score as the minutes ticked away, but Vanderbeck scored an empty netter to make it 5-3 with 1:12 left shortly after Duplessis was pulled for the extra skater.

“It was frustrating watching some of the things that were going on from some individuals,” O’Connell said, leaving the possibility for changes in tomorrow’s lineup up in the air.

The two sides will face off again tomorrow night at 6:30 p.m. in Marquette.