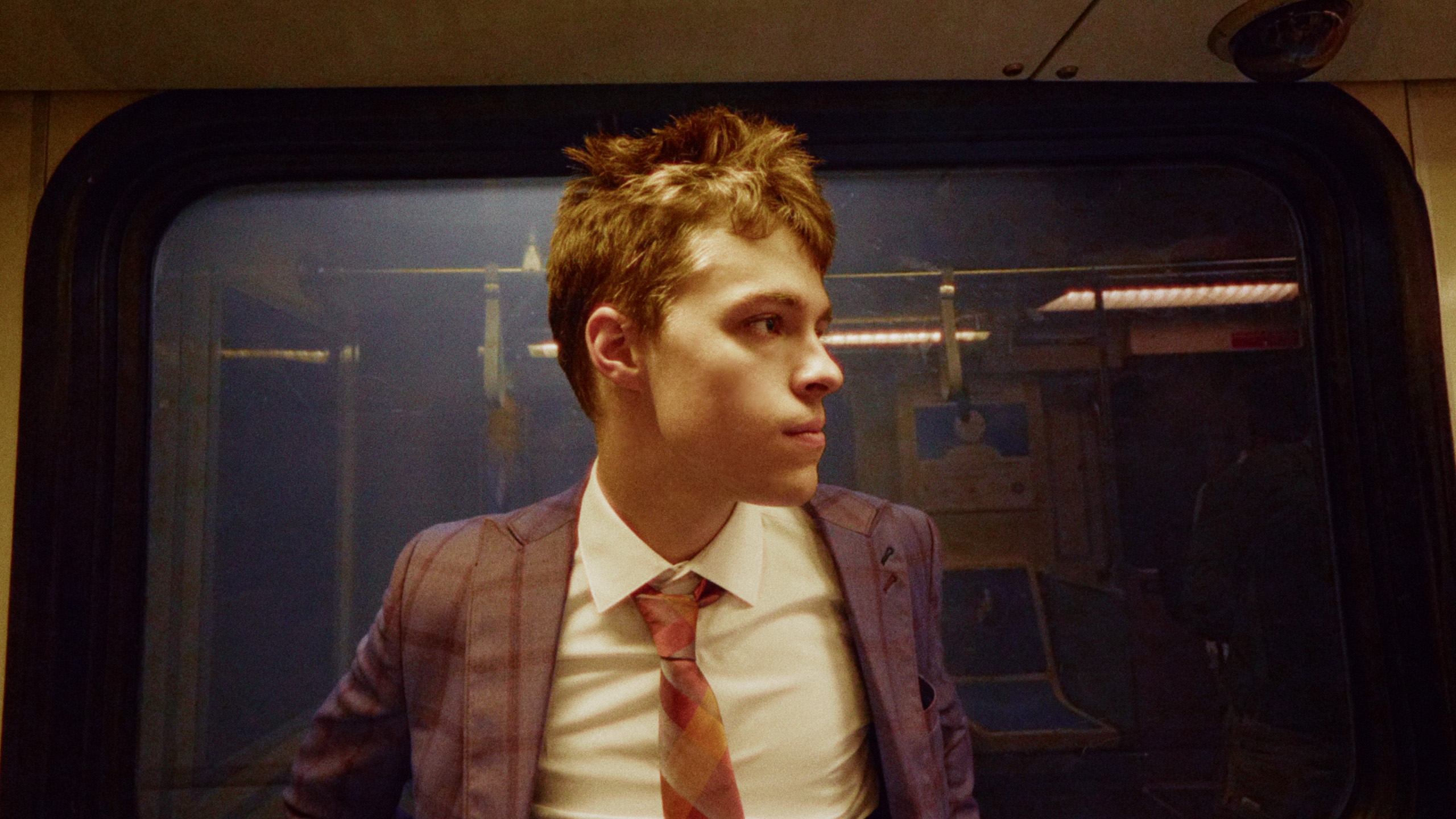 Christian Leave, who has previously been labeled an indie artist since his first EP, is breaking away from the bedroom pop mold and going back to his roots. As he examines the inspirations to his inspirations, he is constantly creating a new sound and a new image. His new EP, “Days Like Lost Dogs,” is like nothing we’ve ever heard from him before. Christian is currently touring with Beabadoobee and he will be performing in Boston later this week.

Kathryn Reno (KR): So my first question was about your tour with Beabadoobee. How do you feel about working together? Do you think you have similar styles of music or similar inspirations? How well is the tour going so far?

Christian Leave (CL): I mean it’s been great. We played our first show last night, and it was really surreal and kind of crazy. You know I spent the past year kind of gearing up for this moment. I’ve been working on this EP and this night was kind of what I had been working up to. It was just a crazy feeling to get out and see everyone there and kind of feel accomplished in a way. It’s great working with Bea. Her band is so cool. They are sick. Great players. They’re really tight and they sound great. As far as inspiration, I don’t know, you know? We both play rock music, so I think somewhere in there our paths cross, but I listen to really obscure music and I’m sure she does the same, so at the same time it could vary, you know?

KR: Do you have any pre-show rituals, like something you do every time before you get on stage?

CL: Well, not yet, but I’ve been trying to develop them. I did a few jumping jacks last night. I like to drink a ton of water so that I have to pee, and then it makes me feel nervous and I move around a lot more. Touch my toes a little bit, but other than that no, not really. I’ll get back to you, though.

KR: Let me know, yeah! Do you think that growing up, you always thought that music was something you wanted to pursue, or did you view it as more of a hobby?

CL: You know, it’s weird. I grew up with a singing family, like my mom and my grandparents were always singing. There was always a piano or something around and it was always something that I loved to do. From the age of 9, I said I wanted to be a rockstar. Which is like, just a 9-year-old thing to say. But then when so got older, I was presented with the opportunities to actually be able to play music, and then I started getting inspired by songwriters and wanted to write how I felt my perspective on things or just a funny or interesting idea I wanted to put down into a song, and I felt more passionately into the process of it all. I think once that started happening, it became a real focus of “this is what I want my career to be like, this is where I feel most comfortable,” you know? And so I think probably both at some point. It still feels kind of like a hobby, but, you know, I survive off of it at the same time. It hasn’t felt like work. Even these past few days have been really exhausting. Everyone, before I went out, was like, “this is gonna kick your ass, it’s gonna be pretty intense.” And it has been, but it’s been the most invigorating. It’s been so fun so far.

KR: What music did you grow up listening to, and how do you think that the kind of music shaped who you are as an artist?

CL: Well, I wasn’t really allowed to–my parents are pastors–and so until I got an iPod, I wasn’t really allowed to listen to any secular music. And so I grew up listening to a lot of really tame 50s/ 60s pop music. I couldn’t even listen to The Beatles, though, so it was mostly Crooners or Five Part Harmonies and stuff, and I think once I got my iPod and I started listening to everything, that was the antithesis of that. It kind of opened up a world to exploration. I think I fell in love with rock and how dirty and gritty it could get, and then I started to learn of all of these rock stars, like Sonic Youth, who have been a big, big favorite band of mine for a long time. Or even someone like Yo La Tengo. They’re all inspired by the same thing, by like 50’s/60’s pop. It’s still the things that they listen to and being able to hear them say that, then listen to it and hear it in the music, I think that’s what recently really inspired me. I still feel influenced by Southern gospel or things like that. It’s cool to kind of pull that in and wrap it into the music. Sorry, that was such a weird answer to that.

KR: No! I really like that! How do you think that social media has helped you change and grow as a musician? I know you were on Vine and I’ve seen your TikToks, too.

CL: I think the internet, in general, has given me this really big archive or library of things that I would have never been exposed to otherwise like, again, not being able to listen to specific kinds of music. Once I was able to have my own private time and search things on Spotify or Youtube, that’s when my world and discography kind of opened up. My influences completely changed. I grew up in these really small towns and the world around me just completely expanded. But with social media, in particular, my life would be completely different without it. It’s given me such great things, you know? It’s given me the ability to communicate with people and be seen and be heard when, in a world without it, I feel otherwise I wouldn’t. Yeah, I mean, it’s completely changed my life in every way, shape, and form.

CL: I did Vine when I was really young. I was 14 when I started, and I probably stopped doing it around 16, maybe even 15, and that’s when I really started focusing on trying to do music. For a long time, it was hard, because I didn’t want to be seen as a social media person. Before about three years ago, traditional media was still the way to go, and that’s what I wanted to be. I didn’t want to be an influencer or some comedy kid or a Vine person. I wanted to be someone who connected people through music, so for a long time, I worked away from that. But now it’s this weird thing of everyone’s turned into the kind of an influencer. The job itself is just all involved, and I think that I had a lot of loathing for it for a long time, but now I’m coming to love it. It’s coming full circle where I’m like, I’m finding myself as a 14-year-old again. But, yeah, it’s a funny thing because I’m meeting some people who are like, “I grew up with your music!” which is like a crazy thing to hear or it’s like “Dude, we are the same age and I’ve known you since I was, like, 14. I grew up watching your videos.” Both things are an honor to hear, but it is a funny thing to meet someone who’s 3 years younger than me, and they don’t know me from that era of my life.

KR: Are you a person who likes being put into a genre of music, like you’re more comfortable being labeled as one type of artist, or do you feel like you want to do multiple things at once?

CL: I don’t know. I think I’ve come to a point in my life where I just listen to so much music, it’s the only thing that I do in my free time. I always have earbuds in, and I think it’s kind of to drown out tinnitus or something but I do it all the time. I listen to so many different types, that it feels genre-less at this point like it doesn’t matter to me. It’s more about the emotions that it evokes. Right now–at least for the past three years–I’ve been really into rock and roll, but not even rock and roll, more like rock pop, the mid to late 90s and late 80s rock, punk, and grunge music. I’m really in love with shoegaze. I like the idea of being seen as one of those types of people, but at the same time, I don’t like the idea of having an expectation of only putting out that kind of stuff. I think that, as I’ve moved forward, I’ve tried to make it a point through the projects that I’ve made to be kind of fluttering in both worlds. On this new record, it’s very rock-oriented. Every song has a guitar. The last song is like this big, orchestral, 1967, close to Minnie Riperton vibe. It’s a left turn, but I still think that it works in some ways, as far as the complete story is concerned, so the little things like that I tried to do to keep myself out of it. Long story short, yes and no. It doesn’t really matter.

KR: Is there any advice that you would have for younger artists who are on the path of social media popularity who don’t want to be known for that or who want to get more into their own art?

CL: Focus on the art. I think that would be the first thing. Focus on what you want to say. Make sure that you like it because at the end of the day, numbers are just numbers and notoriety is just notoriety. I think there’s a level of passion that you should feel within yourself and confidence that you’re good regardless of what other people are saying. As long as you like it, that’s the point. As far as beating the artist struggle, just keep going. People come. Eventually, it works.

KR: Is there anything else you’d like to add?

CL: Let the people know that they should come to a show while we’re on tour.

(November 5th at the Royale in Boston)