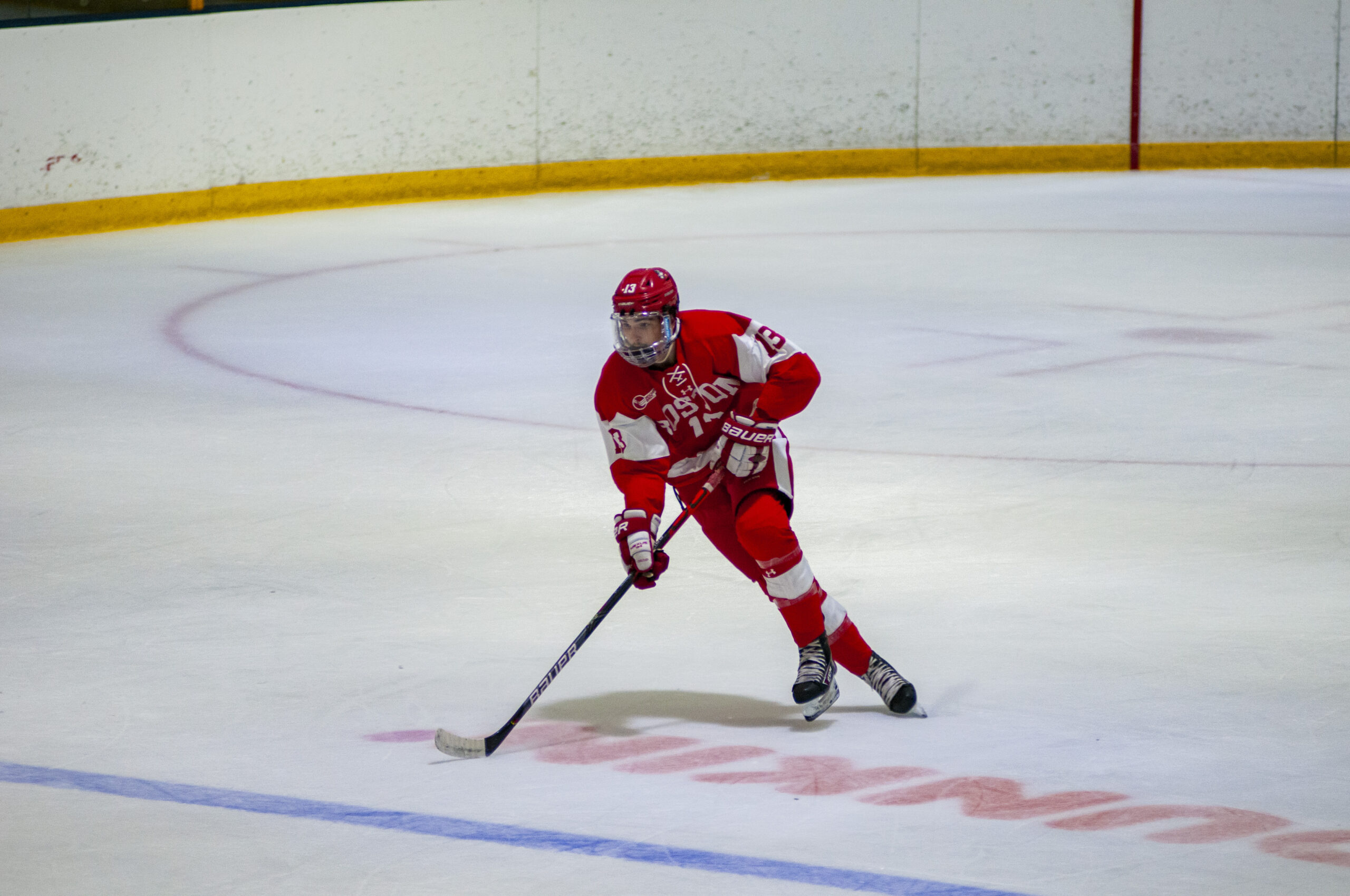 Sophomore forward Dylan Peterson caught a break up ice and wheeled down the left flank, throwing the puck at Warriors netminder Zachary Borgiel. The puck popped up on his chest and flew into the air, seeming like a routine save.

Peterson wheeled around the cage with his hands in the air; before anyone else knew it, the puck fell on Borgiel’s neck and bounced into the net. It was Peterson’s second goal of the night en route to a hat trick, but there was plenty more scoring to come on either side.

“I figured it was going in so I was gonna celly (celebrate) no matter what,” Peterson said after the game. “So thank God it went it, cuz if I was cellying and it didn’t, it’d look kinda stupid.”

The Terriers ultimately won 8-6 to secure the weekend split. Merrimack defenseman Zach Vinnell had a hat trick of his own, but after the Terriers scored on four of their first six shots, there was no looking back.

“We talked about not shooting the puck last night as a team, and then we came up with kind of an attack mentality of just playing the right way: Getting the puck behind in their [defense], and getting shots on net,” BU head coach Albie O’Connell said.

Senior assistant Ty Amonte opened the scoring in his first game since Jan. 9 last season. Just 2:22 into the game, a loose puck squirted out from behind the net, and freshman forward Tyler Boucher found Amonte positioned in the slot to take the early lead.

Allow Ty to reintroduce himself. pic.twitter.com/KyLrSK6l2v

Merrimack forward Filip Forsmark tied the game just over a minute later on the power play, jamming the puck past Commesso on the right side. It was the first power play goal the Terriers allowed this season after going 19-for-19 on the kill through the first five games.

GOALLLLL! Filip Forsmark jams it home on the power play and we're quickly back to level!!#GoMack pic.twitter.com/vJRHKimySg

The Terriers regained the lead about a minute after that, as sophomore forward Nick Zabaneh sped into the zone and behind the cage, dishing a backhand pass to Peterson in the slot, who buried it for his first of the season.

What a sweet feed from Zabs to set up our second goal of the night! pic.twitter.com/HkTUNU5deC

Junior forward Robert Mastrosimone got on the board in a similar fashion as Peterson, positioning himself in the slot to send home a pass from fellow junior Wilmer Skoog behind the net with just over 11 minutes left in the period.

Mastro's got the student section fired up thanks to his third goal of the season! pic.twitter.com/yx0GRU86M8

“Mastro, you know, he’s Mastro,” O’Connell said. “He’s like Gumby out there. All of a sudden comes up with the puck and wins the battle.”

Peterson scored his second goal three minutes later, and Borgiel was pulled after allowing four goals on six shots. Junior Troy Kobryn entered in relief and kept the Terriers off the board through the remainder of the period.

Skoog stretched the lead to four midway through the second period, waltzing through the offensive zone and into the slot before firing it past Kobryn. It was Skoog’s third goal of the weekend after scoring twice in Friday’s 3-2 loss.

The Warriors scored two more power play goals — one from Vinnell and one from Forsmark — to cut the deficit to two with 91 seconds left in the frame.

GOALLLLLL! Filip Forsmark with his second of the night and we're back in it!#GoMack pic.twitter.com/PTfAxIQW2X

Peterson put the Terriers back up three by completing his hat trick off the rebound with 11 seconds left, making it 6-3 entering the final 20 minutes.

Head into the third period by checking out Petey's third goal of the game! pic.twitter.com/HjWCM8HT66

Warrior defenseman Declan Carlile quickly made it a two-goal game again, scoring off a rebound that hit him in the right place at the right time, firing the puck in from the right side of a gaping net just two minutes into the final period.

The Terriers kicked back about 30 seconds later, when freshman forward Brian Carrabes checked the puck loose to start a three-on-one rush with Sam Stevens and Markus Boguslavsky. Carrabes called his own number and rifled it past Kobryn, notching his first collegiate goal.

Vinnell scored his second and third goals of the night to round off the Merrimack scoring at six, sandwiching Zabaneh’s first collegiate goal. When the dust settled, 14 goals were scored overall, but the Terriers stood victorious.

“Once we did get the puck we worked it from low to high, east to west and then got it back down,” O’Connell said of his team’s offensive game.

12 players had multi-point nights, six on each side, while sophomore netminder Drew Commesso stopped 26 of 32 shots. Kobryn made 20 saves and allowed four goals in relief.

The Terriers face a home-and-home weekend series against UMass Lowell next weekend.