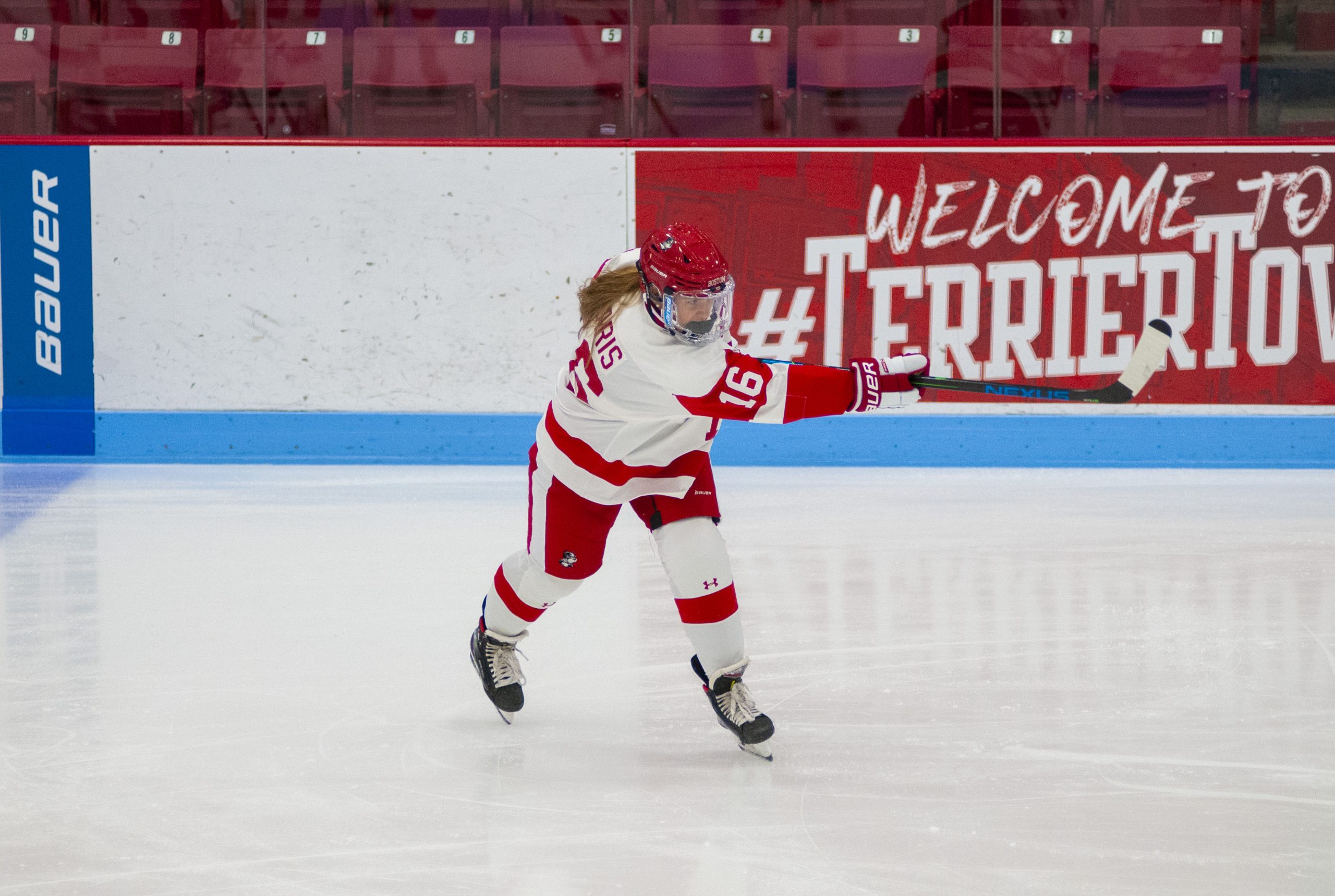 In the first period it was all BU, with the Terriers peppering junior goalie Amanda Rampado with 15 shots compared to RPI’s lonely two. This, however, didn’t tell the story of the period. Despite BU having two early power plays, they were unable to capitalize on their advantage. This was the story for the whole game as BU went 0-for-5 on the advantage. RPI had three chances of their own, capitalizing on one.

This game’s deadlock was broken with just under five minutes to play in the first period, with BU freshman goalie Callie Shanahan misplaying a routine distribution, which led to a scramble that eventually fell to RPI’s Sarah Bukvic. The junior forward quickly snapped a shot high blocker side to get the Engineers on the board. It was her second on the season, with assists from Delaney Weiss and Magdalena Erbenova.

The Terriers, proving their resilience once again, responded in less than two minutes, with senior Courtney Correia making some slick moves through the attacking zone and eventually wristing a close range shot near side to score her team-leading fifth goal of the season. The helpers on this goal were assigned to Mackenna Parker and Madison Cardaci.

Here's a look at Courtney's fifth goal of the year that made it a 1-1 contest. #GoBU pic.twitter.com/28pwxK6E8e

The second period brought a change of momentum, with RPI controlling more of the play and outshooting BU 10-6. The penalty trend repeated itself, with the Terriers having two golden opportunities to establish a lead while the Engineers once again had just one.

This frame got off to an exciting start, with the home side regaining the lead just over two minutes in, which all started with another Shanahan error. After saving a shot from RPI’s Lilli Friis-Hansen, the netminder couldn’t corral the puck, leading to an all-out scramble in the crease, which eventually fell the way of Ellie Kaiser. The sophomore forward barely forced it over the line to excite the Troy crowd once again.

It took BU slightly longer to respond this time, but Julia Nearis struck to tie things up at two with 2:22 to go. A long stretch pass from Julia Shaughnessy sent Nearis rapidly down the right flank where she unleashed a lethal slap shot that beat Rampado clean for her fourth goal of the season.

The game remained in an intense deadlock for the majority of the third period, but the main theme of the game came into focus: special teams. BU once again had an early power play opportunity to gain some momentum, but squandered it yet again. On their five chances on the night, the Terriers only managed six shots on the RPI net.

The Engineers, on the other hand, would not go goalless on the advantage. With 1:14 to go in the third, BU failed to clear their own zone. RPI’s Lauren Severson picked up the puck and slid a slick pass to Julia Blitz, who emphatically buried a wrister past Shanahan’s blocker side to put the Engineers up once again. The goal was Blitz’s second of the young season and would prove to be the game winner.

RPI later tallied an empty netter through Mikayla Cappelle with less than a second left on the clock. It was the senior’s second of the season and capped off an impressive upset of the Terriers.

Can BU right the ship of this current three game winless streak? They’ll have to quickly regroup as they play today as well on the road in Schenectady, NY against a Union side that lost 9-0 to the Engineers just a few weeks prior. The Dutchwomen haven’t won a game since Oct. 2, so this is a prime chance for BU to reestablish their confidence and get a much-needed victory.