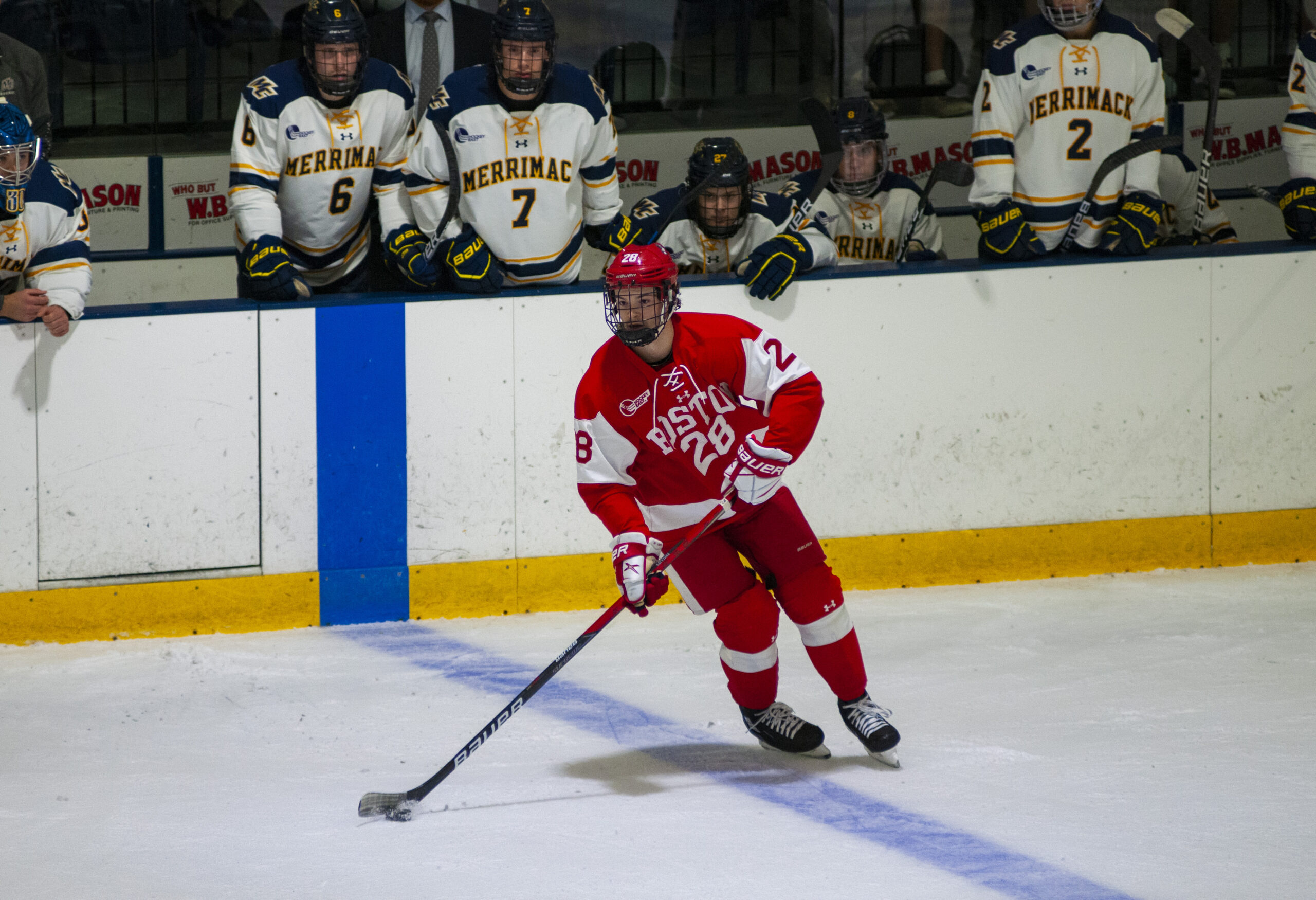 “I thought we played hard, but Merrimack was the better team,” BU head coach Albie O’Connell said. “We had many opportunities to shoot the puck tonight that we passed up on, and they shot everything they could at the net.

“Merrimack played a good game and they deserved to win.”

Junior forward Ethan Phillips had two assists for BU, the first time he has done so since his collegiate debut on Oct. 5, 2019, at Union. Sophomore goaltender Drew Commesso made 28 saves.

Merrimack outshot the Terriers 31-20. O’Connell thought his team passed up on too many shooting opportunities whereas the Warriors “shot everything they could at the net.”

“You’ve gotta tip your cap, they blocked some shots, but I thought we were borderline inept at the offensive blue line,” O’Connell said. “We were stick handling instead of widening out, shooting one down and keeping the puck alive. We had a 3-on-1 and a 2-on-1 in the first period, and we didn’t even think about shooting. It’s not good enough…

“Skoog walks down broadway at the end on a 4-0n-2 rush, and he passed it. It’s mind-numbing, absolutely mind-numbing, especially down a goal. I’m really frustrated with our lack of attack, and our lack of wanting to score and having a drive to score… I love our competitive spirit, and I love how we battled. I just think our smarts were awful. We shot ourselves in the foot a cuple times and we refused to shoot the puck.”

The Warriors struck first at 9:14 of the opening period as sophomore forward Alex Jefferies notched his first goal of the season.

Here's a look at Skoog's power-play goal that sent us to the room tied at 1-1. pic.twitter.com/CNDKDgiRDt

Junior forward Matt Brown nearly gave BU the lead on a shorthanded breakaway during the second period, but Borgiel made a strong five hole save.

Skoog gave BU a 2-1 lead at the 16:00 mark of the second. Phillips was first on the loose puck in the corner and fed Skoog in the slot for his second of the night.

Wilmer Skoog was all alone in front of the net and that was good for us. pic.twitter.com/DwGDWvgBJs

Graduate forward Jake Durflinger evened the score with 1:29 remaining in the second. The puck hit the netting in the Merrimack zone, but play continued after the officials did not notice and the Durflinger capitalized. An error at the Merrimack blueline afforded Durflinger a clear breakaway leading to his goal.

“You can’t have two defenseman run into each other, [Merrimack] go on a breakaway, and then chase them down and take a penalty,” O’Connell said.

Arvedson’s shot from the point beat Commesso at 6:31 of the third to make it 3-2 for Merrimack.

GOALLLLLL! Adam Arvedson with his first career goal on an absolute SNIPE and Merrimack takes the lead!!#GoMack pic.twitter.com/A57mMt5fjt

BU pulled Commesso in favor of an extra attacker late and nearly tied it with seconds remaining, but freshman Tyler Boucher deflected the puck with a high stick. The goal was immediately waved off by the officials.

“I liked it at the end when we pulled the goalie. I thought those guys had a shooter’s mentality,” O’Connell said. “It was a great play by Boucher at the net, but the stick was a little high.”

The Terriers went 1-for-5 on the power play, while remaining perfect on the penalty kill, keeping the Warriors off the board on their three power play opportunities.

BU and Merrimack will rematch on Saturday at Agganis Arena. Puck drop is set for 7 p.m.