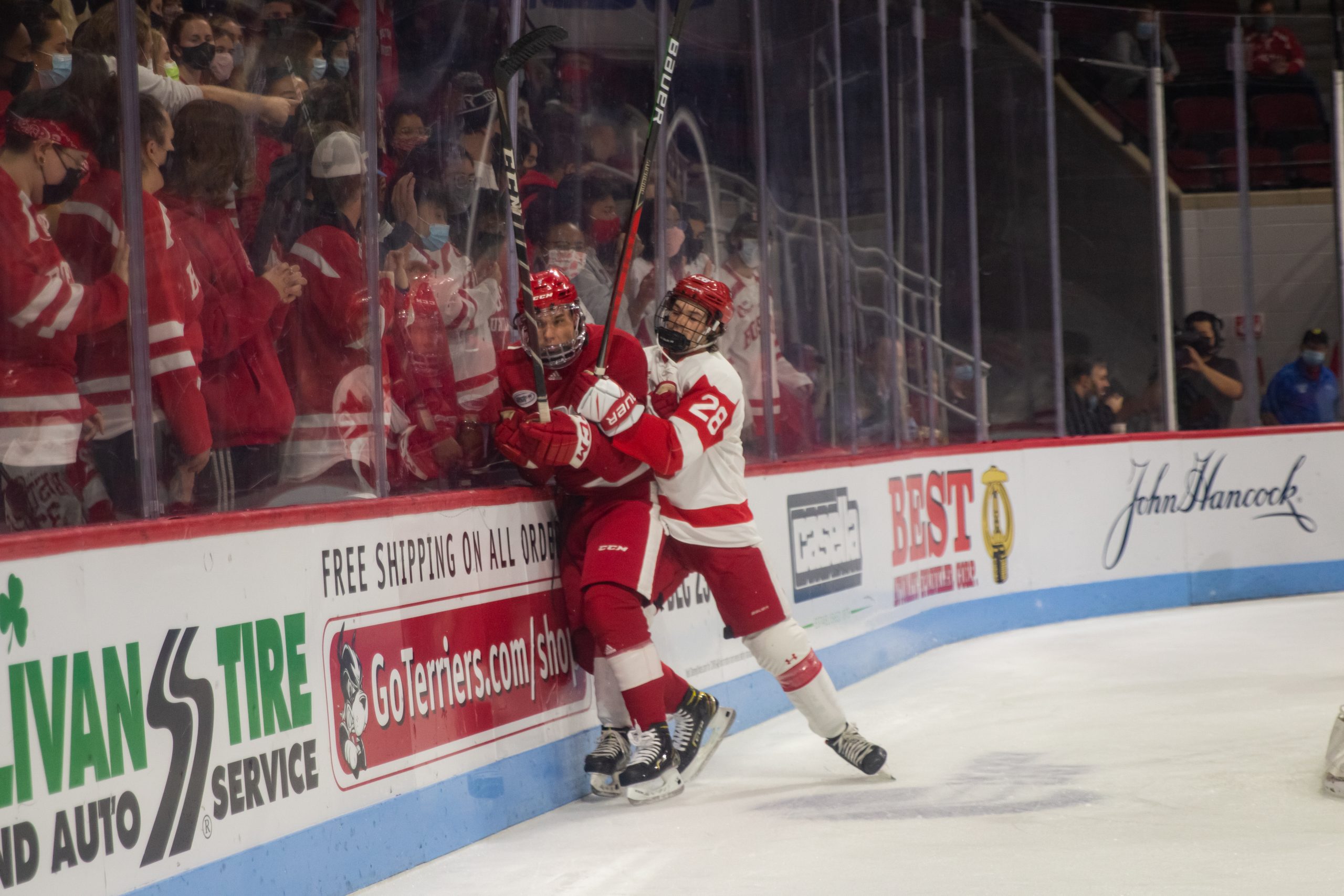 Juniors Ethan Phillips (1g, 1a) and Dom Fensore (2a) led the way with two points each, and sophomore goaltender Drew Commesso made 30 saves. Sacred Heart senior Todd Goehring scored the lone goal for the Pioneers.

“I was really pleased with our effort, really happy for our guys, and most happy for the BU community and the fans who got the chance to witness a win,” BU head coach Albie O’Connell said after the game.

The Terriers got two early power play opportunities, getting two chances within the first five minutes, but only generated two shots on goal. A handful of missed passes prevented any offense from being established.

The Terriers managed to strike first at with 3:32 left in the first in an ultra-rare, shorthanded goal straight from the face-off drop. Junior forward Sam Stevens lined up for the draw at the left circle, and flicked the puck on net as soon as it hit the ice.

No one was prepared for it, and in a blink the puck was in the back of the net to give the Terriers a 1-0 lead.

“I wanted to catch them by surprise,” Stevens said during an intermission interview.

“That was a highlight reel goal,” O’Connell said, praising Stevens’ intelligence and stick placement on the play. “You can see that on ESPN.”

Here’s a look at Sam Stevens’ shorty off the face-off (via CollegeSportsLive):

Stevens said he’s been practicing that shot and “wanted to catch them by surprise” during the intermission interview. pic.twitter.com/XYFQUMGCot

The Terriers got another man-up opportunity a couple minutes into the second frame, when Sacred Heart forward Ryan Steele was sent off for goaltender interference. On their fourth power play chance of the night, freshman forward Tyler Boucher scored his first collegiate goal to double the Terrier lead 2:46 into the period.

Just moments later, Sacred Heart cut the deficit when they caught the Terriers up ice and charged on a three-on-one rush, and Goehring called his number to snap the puck past Commesso.

BU had a chance to respond two minutes later when Sacred Heart’s Austin Magera took a slashing penalty. On the ensuing power play possession, Mastrosimone sent the puck inside from the right circle. Phillips got his stick on the puck to deflect it in, reclaiming the two-goal lead. It was his first goal since Jan. 24, 2020 after missing most of last season due to injury.

“To finally get the monkey off the back after almost two years, it feels really good,” Phillips said.

A great redirection by Ethan on the power play has us ahead by two! pic.twitter.com/4m7JpLz7NG

Five minutes into the third, the Terriers extended their lead when junior defenseman Fensore sped into the left flank of the offensive zone. He found junior forward Wilmer Skoog in the slot, where the Swede one-timed it low to beat Robbins and make the score 4-1.

Skoog's first goal of the year has us ahead by three early in the third period! pic.twitter.com/KSpuyAfoTw

Play got chippy, with frustrations boiling over on both sides throughout the remainder of the period. There were multiple scrums and series of shoving after the whistle, but nothing that escalated into the “major/game misconduct” territory.

Sacred Heart got a prime chance to claw back with five minutes left after Phillips, Kaufman and Steele went to the box in quick succession to create a four-on-three situation, but the Terriers’ penalty kill held tough to remain a perfect 16-for-16 on the season.

“Your best penalty killer is your goalie,” O’Connell said about the clean start down a man. “Our forecheck has been good, we’ve been aggressive when we’ve needed to.”

The Terriers held on at even strength as well, and secured the weekend split.

“It’s fun when you’re winning games, and I think everyone had fun tonight,” Phillips said.

BU faces a home-and-home against Merrimack next weekend, playing in North Andover on Friday before returning home on Saturday.