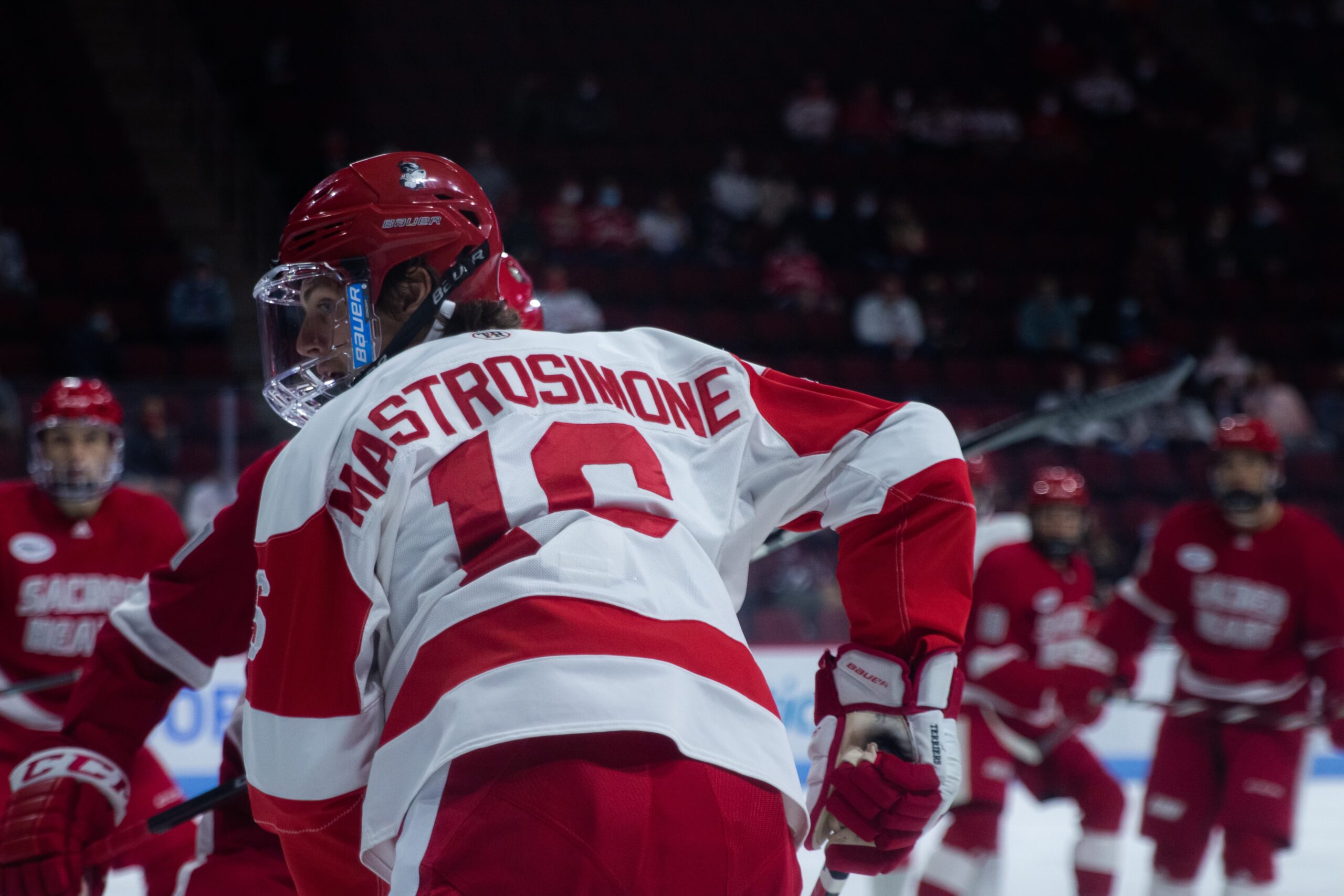 “It’s obviously a really frustrating ending, losing late and how we lost it,” BU head coach Albie O’Connell said. “I liked our competitive spirit. I liked how hard we played.”

The win marked the first of the season for SHU. Senior forward Austin Magera had a goal and an assist for the Pioneers, and junior goaltender Justin Robbins made 23 saves.

BU has now dropped two games in a row. Terrier junior defenseman Dom Fensore had a goal and an assist. Sophomore goaltender Drew Commesso made 31 saves.

“We got some guys out right now, but we’re not here to make excuses,” O’Connell said. “Tuch got dinged up in the game. I haven’t heard a final [evaluation] on that.”

Neither team scored in the first period. SHU outshout the Terriers 11-7 after the first 20 minutes, thanks largely to three power plays, including a five-minute major and game misconduct for hitting from behind on BU junior forward Markus Boguslavsky.

“[In the] first period we kind of shot ourselves in the foot, taking penalties,” O’Connell said.”We got a little gassed.”

Fensore scored to break the scoreless tie at 4:30 of the second. Junior forward Wilmer Skoog found Fensore in the high slot, and he rifled a shot top shelf.

Here's Dom Fensore's goal. Phillips finds Skoog down low, who shows off his vision and threads it to Fensore in the high slot. He rips it top shelf. pic.twitter.com/wneXWMsj45

Here's how Braeden Tuck tied it for SHU. Puck wraps around, and Austin Magera touches it to Tuck, who's all alone in front. pic.twitter.com/WDZ5nywxJv

With 55 seconds remaining in the period, Mastrosimone scored to give BU a 2-1 lead. The Detroit Red Wings draft pick drove wide off the rush and slid the puck through Robbins’ five hole.

Here's Mastrosimone's goal. Drives wide off the rush and beats Robbins five-hole from a sharp angle. Tough one to give up late in the period. pic.twitter.com/FdkwRpSC2D

Magera scored at 12:59 of the third to tie it for SHU, redirecting sophomore defenseman Dante Fantauzzi’s shot from the point.

Here's Magera's goal. The senior gets a stick on the shot from the point by Fantauzzi and it finds a way through Commesso. pic.twitter.com/ahLP0MRmt1

Steele, a senior forward, scored the late game-winner off a broken play in front to give the Pioneers the 3-2 win. Graduate forward Dakota Raabe tried to stuff a wraparound attempt past Commesso, and the rebound jumped right to Steele.

“[SHU] had one guy on a wraparound, and we had three guys around him and we don’t get under his stick,” O’Connell said.

Here's Steele's game-winner. Dakota Raabe tries to wrap it around, Commesso makes the first save and the rebound jumps right to Steele. pic.twitter.com/ycSbLJX73l

BU went 1-for-2 on the power play, while Sacred Heart squandered their five opportunities on the man-advantage.

“We won the special teams game. We won the face off game, but we didn’t win the game,” O’Connell said. “We’ve got to get ready and recovered to play tomorrow night, versus a good, solid hockey team, who obviously was ready to play tonight for 60 minutes.”

The Terriers and the Pioneers will rematch Saturday at Agganis Arena. Puck drop is at 7 p.m.