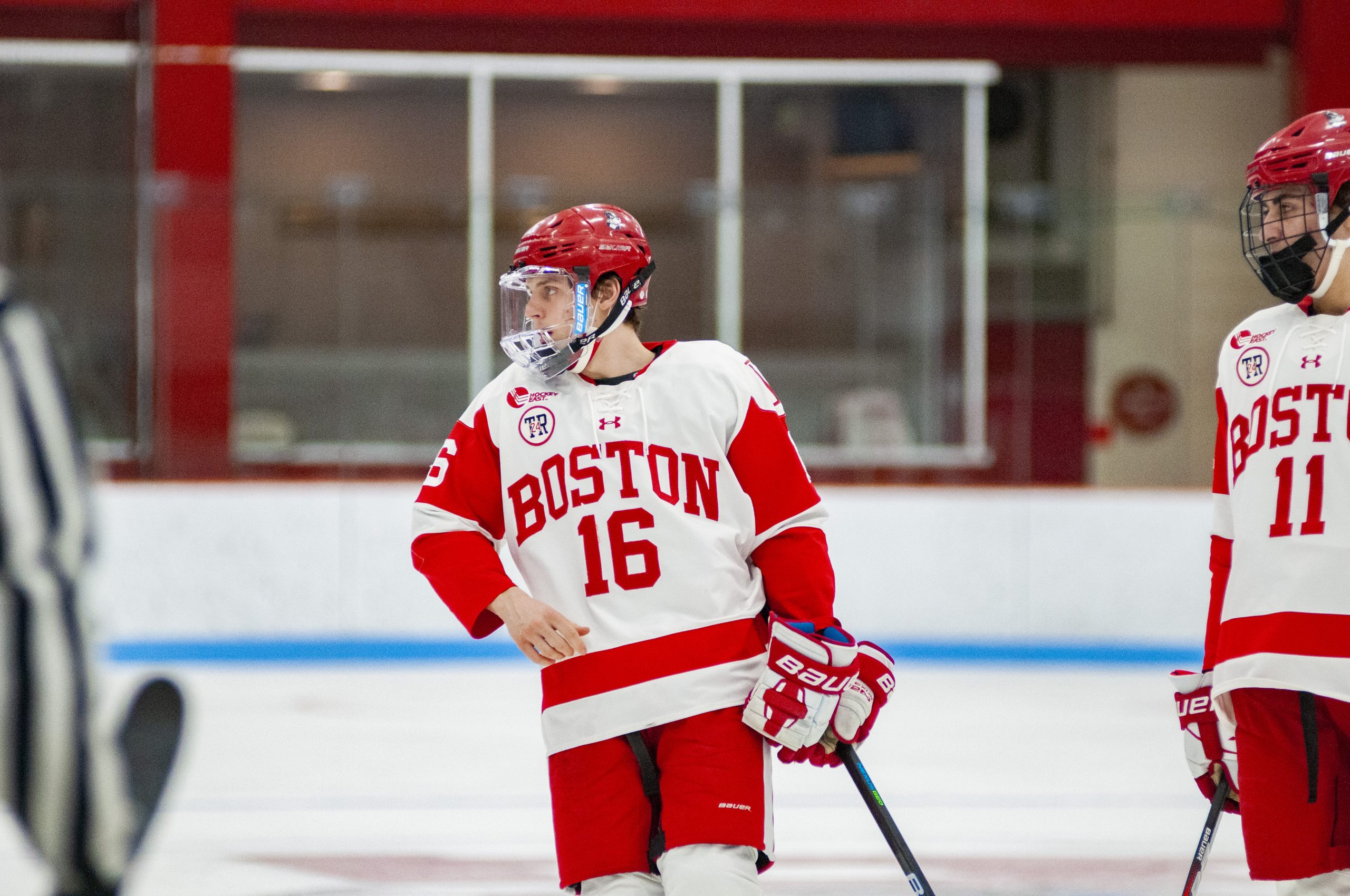 For the first time in 581 days, the Boston University Terriers (1-1-0, 1-1-0 HE) played at Agganis Arena in front of a full crowd. Excitement was buzzing when the puck dropped against the University of Connecticut Huskies (2-1-0, 1-1-0 HE), but it slowly drained as the Terriers fell 5-1.

Junior forward Matt Brown scored the lone goal for BU, which was assisted by senior defenseman Joseph Campolieto and sophomore defenseman Cade Webber. It was Brown and Campolieto’s first point in a Terrier uniform. Sophomore goaltender Drew Commesso made 25 saves in the loss, and fellow sophomore Vinny Duplessis saved all seven shots he faced in relief.

Both sides generated chances throughout, but only the Huskies executed. Terriers split the opening series and are now 1-1 on the season.

The Terriers were physical from the puck drop, not afraid to throw their bodies around. First-liners Robert Mastrosimone and Brown each had good looks on an odd-man rush, but Hanson passed his first tests of the night.

UConn ultimately struck first halfway through the opening frame. Evans pushed a shot from the right circle, bouncing off Commesso’s pads and onto the stick of Jachym Kondelik. Marc Gatcomb was all alone to the left of the cage, where he received the puck and fired it into a wide-open net.

It did not take long for the Terriers to respond, however. Driving into the offensive zone in a four-on-two rush, senior defenseman  Campolieto received a long breakout pass from Webber down the left side and fired it on goal.

The puck bounced right onto a streaking Brown’s stick, allowing the UMass Lowell transfer to bury his first goal with the Terriers. Campolieto’s assist is the first point at BU after skating in 16 games with the Terriers last season.

It feels good to be scoring goals in Agganis again! pic.twitter.com/bNxiFJmqUa

The two sides traded chances down the stretch with the Terriers committing a handful of lazy passes intercepted by the Huskies in the defensive zone, but the score remained deadlocked by the first intermission.

UConn took the lead back just 47 seconds into the second period. Gatcomb corralled a wall pass on the left side and connected with Evans, who was left wide open on the cross-ice pass to slot the puck past a shifting Commesso.

2nd period starts and the Huskies grab the lead right back. Jonny Evans with his first on the year! #IceBus

UConn doubled the lead halfway through the second, when the puck found Ryan Tverberg all alone at the top of the zone for a clear breakaway. The winger strolled in and beat Commesso on the backhand to make it 3-1. UConn got another breakaway chance shortly after on a blocked Campolieto shot, but Commesso stood tall.

BU turnover leads to a break-away chance for Ryan Tverberg who finishes it off for a 3-1 lead at 9:46. Tverberg's 2nd on the year!#IceBus pic.twitter.com/Mc0oepHc8k

“Teams get coached, they play good defense. If you try to play individual in our league, it’s going to end up in the back of your net, and that’s what we did,” O’Connell said.

The Terriers created multiple close chances in the final minutes of the second period, aided by a Roman Kinal high-sticking penalty. The Terriers generated four shots on the power play and eight more in a row after that, but couldn’t reach the back of the net.

The puck did get past Hanson early in the third, when Max Kaufman carried the puck behind the net and brought it around front to put it in top shelf, but the play was whistled dead after officials lost sight of the puck. The Terriers also immediately went to the penalty kill on a Tyler Boucher tripping call.

BU killed the penalty, but UConn made it 4-1 just minutes later with Tverberg’s second goal of the night. The sophomore was all alone on the left face off dot and knocked in the puck with 14:05 left in regulation.

Tverberg gets his 2nd on the night and extends the #IceBus lead to 4-1! pic.twitter.com/cng46lLy9j

Things went from out of hand to out of pocket when Carter Berger fired a powerful wrister from the right circle beat Commesso high to give the Huskies a four-goal lead. Vinny Duplessis replaced Commesso immediately after.

Carter Berger with an absolute SNIPE for his first of the season and a 5-1 lead for the #IceBus! pic.twitter.com/uuobIQUBmR

“Commesso was outstanding, even giving up five. It could have been 10,” O’Connell said.

With the game all but decided, time ticked off with a couple more penalties doled out to each side, and UConn walked away victorious.

The Terriers host Sacred Heart on both Friday and Saturday next weekend, with the first game starting at 7:30 p.m. and the Saturday matchup starting at 7 p.m.