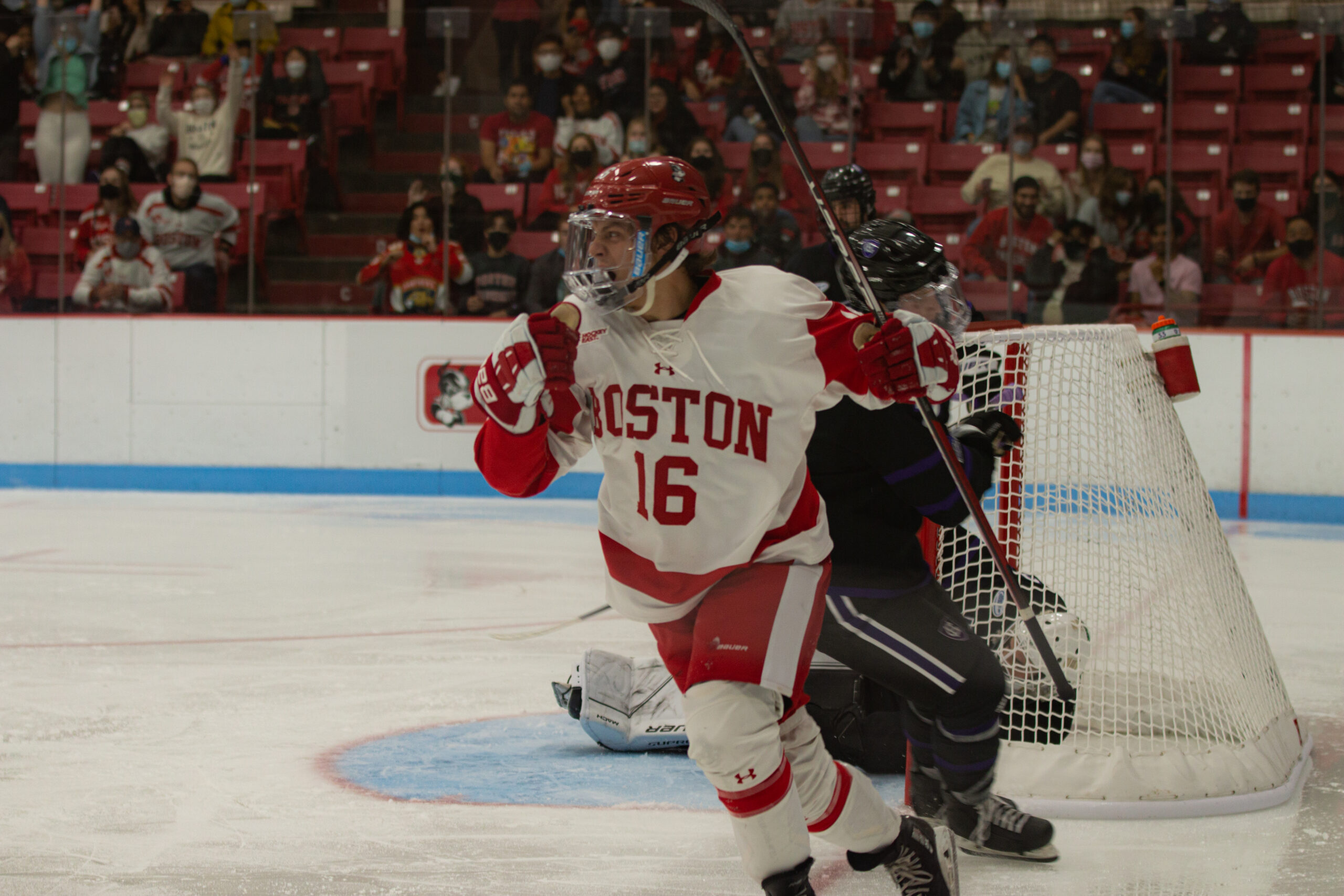 HARTFORD, Conn. – Kicking off their 100th season with a come-from-behind win, the No. 10 Boston University Terriers (1-0-0, 1-0-0 HE) defeated the University of Connecticut Huskies (1-1-0, 0-1-0 HE) 2-1 at the XL Center Friday. Terrier head coach Albie O’ Connell said he really liked the team’s leadership and effort on the ice against a veteran team like UConn.

“[We’re] very pleased and excited – anytime you can get those points in Hockey East, especially on the road, especially versus one of the better teams in our league,” O’Connell said. “UConn was very hard to deal with tonight. It wasn’t easy. It took a lot of effort.”

The Huskies took an early lead in the first period with a rush goal at 5:04 from junior forward Vlad Firstov. With a fast breakout, senior forward Jonny Evans passed the puck to senior forward Jachym Kondelik, who completed a tape-to-tape pass to Firstov, scoring his third goal of the season.

Vlad Firstov uses his speed and skill to put the Huskies up 1-0 at 5:04. His 3rd on the season! #IceBus pic.twitter.com/CznAF1pEfv

“They kind of caught us on a fast break there,” O’Connell said. “The guy made a really strong play at the net, not a lot Drew could have done.”

Terrier goaltender Drew Commesso made two crucial back-to-back stops at 15:08 in a successful penalty kill during the first period. At the end of the period, the Terriers had outshot the Huskies 19-10, but still trailed by one.

“I’m psyched for the way we started that game,” O’Connell said. “We came out in the first period, I wouldn’t say we dominated, but we controlled the play for good portions of it.”

Keeping the score 1-0, Commesso went post-to-post to save a shot by Huskies graduate forward Kevin O’ Neil in the last three seconds of the second period. The Terriers still led in shots on goal 30-23.

Late in the third, junior forward Sam Stevens scored the game-tying goal at 14:20. Junior defenseman Domenick Fensore attempted a shot that rebounded to Stevens, who was able to tuck it in with a backhand shot from behind the goal line.

Dom goes coast-to-coast and Sam tucks away the rebound to tie the game at 1-1! pic.twitter.com/SeyhsEZ5NE

The game-winning goal for the Terriers came from junior forward Robert Mastrosimone during a key power play with 3:57 left. Junior defenseman Case McCarthy drove the puck to the goal and it shot off the end wall to junior forward Wilmer Skoog. With another attempt to score, Skoog’s shot rebounded off Huskie’s goalie Darion Hanson, setting up a backhanded shot for Mastrosimone securing a 2-1 lead.

In a last-ditch effort, the Huskies pulled their goalie with two minutes left on the clock, but with the Terrier’s defense standing tall they could not apply enough pressure to tie the game.

The Huskies and Terriers play again Saturday at 7 p.m., this time at Agganis Arena.

Featured Image: Junior forward Robert Mastrosimone celebrates a goal during the second period of an exhibition game against Holy Cross at Walter Brown Arena on Oct. 2, 2021. Photo by Joe Eachus