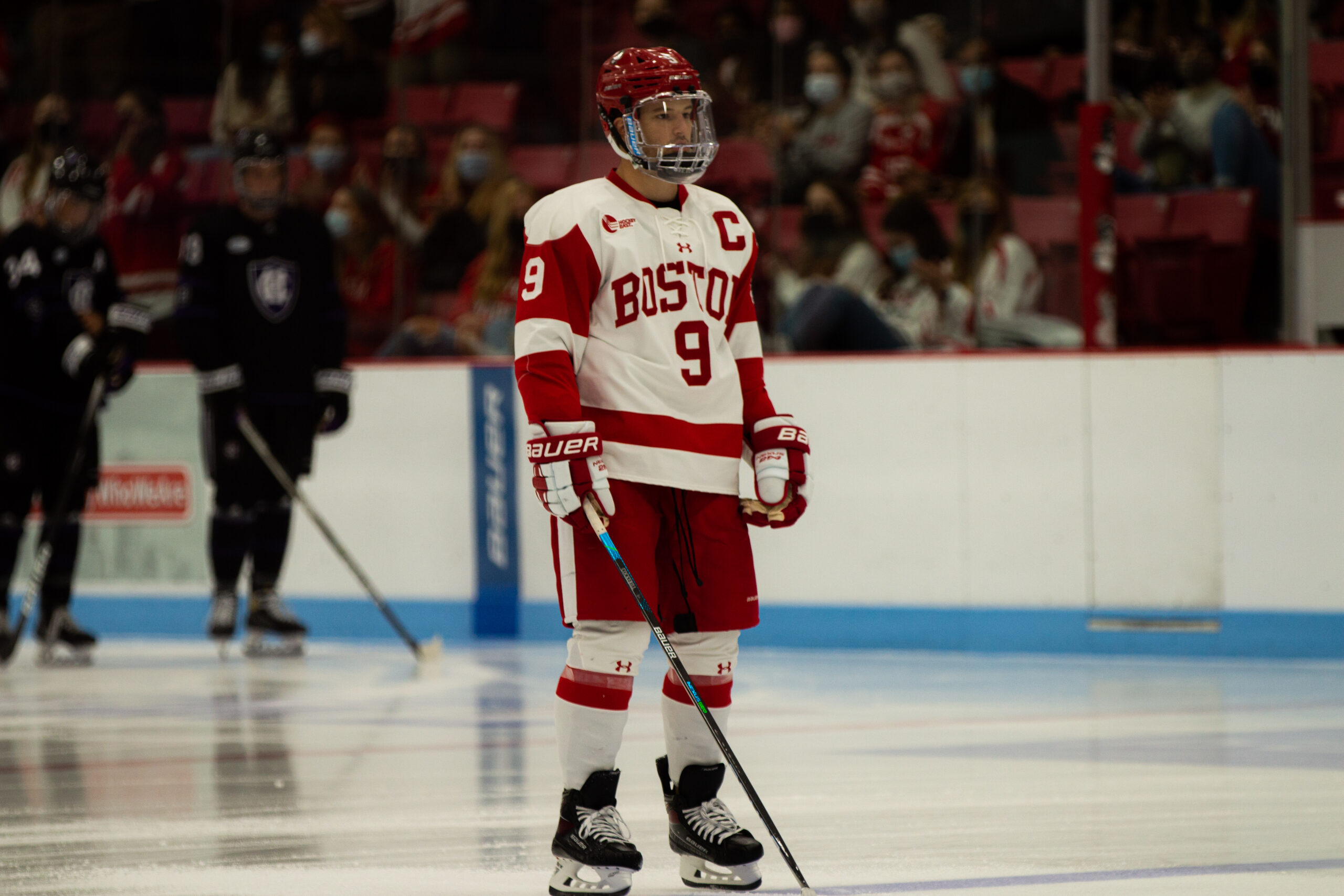 The No. 10 Boston University Terriers will kick off their regular season with a two-game home-and-home series with the University of Connecticut Huskies (1-0-0). BU is coming off a 5-1 exhibition win versus Holy Cross, while UConn has already begun its regular season, winning 6-3 against Sacred Heart at home.

“UConn has got probably one of the best crops of players in our league,” O’Connell said. “It’s very hard to play in that building. They’ve got a veteran team, so it will be really tough task to go on the road and beat their club.”

For BU, five different skaters scored against Holy Cross and 12 in total tallied a point. 10 Huskies got on the scoresheet against Sacred Heart.

The Terriers enter the season ranked tenth in both the USCHO.com and USA Today/USA Hockey Magazine polls in addition to being picked to finish second in Hockey East by the coaches’ poll. BU rode a 10-5-1 record to second in the league last season before falling to UMass Lowell in the league quarterfinals and St. Cloud in the NCAA Northeast Regional semifinals.

“I think every program is really excited to get started, us included,” BU head coach Albie O’Connell said. “We’ve just been preparing all week.”

Meanwhile, the Huskies are unranked, despite receiving votes in the USCHO poll, and are projected to finish sixth in the conference. UConn went 10-11-2 before losing to Providence in the Hockey East quarterfinals.

Sophomore goaltender Drew Commesso is also back in net and expected to take on most of the workload after posting a 6-3-1 record, a .915 save percentage and a 2.99 goals-against average in 11 appearances last season.

BU also brought in junior forward Matt Brown via the transfer portal from UMass Lowell. Brown had eight goals and five assists for 13 points in 18 games last season, following up 6-18-24 numbers in 33 games as a freshman.

“[Brown] is a really good offensive player,” O’Connell said. “He’s another guy, when the chips are on the line, he has a way of scoring big goals. I think everyone saw that in the playoffs last year.

“I think he’s one of the better, natural scorers in the league. We’re hoping that he can really impact our lineup offensively.”

The Huskies will have to deal with life after Tomas Vomacka. The goaltender played every minute for UConn last season, recording a .909 save percentage, a 2.84 GAA and a 10-11-2 record with one shutout. Graduate transfer Darion Hanson is expected to be relied on in the crease this season. Against Sacred Heart he made 31 saves on 34 shots. In 78 games with Union, Hanson posted a 2.55 GAA and a .913 save percentage.

UConn also returns senior forward Johnny Evans, who led the conference in goals last season (14) and had 29 points n 23 contests. Senior forward Jachym Kondelik, who had 4-18-22 totals in 23 games last year, is among returners as well.

“They’re a really good hockey team,” O’Connell said. “They’ve got a lot of different types of players that can hurt you… I know Kondelik is probably one of the best face off guys in the country. So when he’s doing well at the dot, you’re chasing the puck and playing defense right away.”

Puck drop for Friday’s series opener is set for 7 p.m. at the XL Center in Hartford, Conn., while Saturday’s rematch is also slated for 7 p.m. Saturday at Agganis Arena will also be BU’s 100th season celebration.

Featured Image: BU captain Logan Cockerill stands at the blue line as the starting lineups are announced prior to an exhibition against Holy Cross at Walter Brown Arena on Oct. 2, 2021. Photo by Joe Eachus.