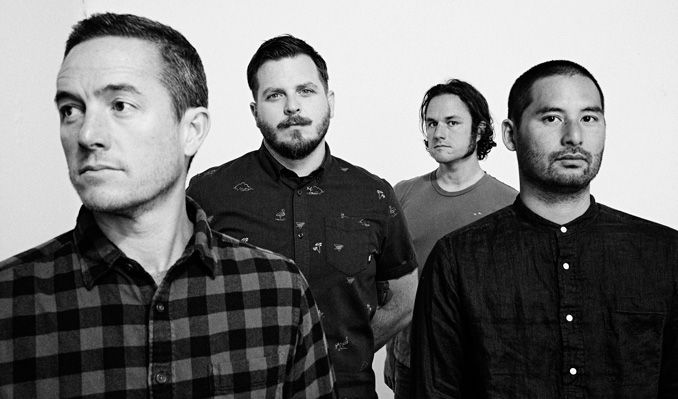 It has been over two decades since post-hardcore pioneers Thrice first stepped into the limelight with a spellbinding creativity that has since weaved its way through an eclectic music catalogue and into the hearts and minds of fans all over the world.

Through countless tours, album releases, and even a four-year hiatus, Thrice has stood its ground despite being in a state of constant musical flux. The quartet has dipped their toes in several genres over the years, making the task of labelling them almost seem like a disservice, if not impossible.

Horizons/East proves no different in that it is different from the rest. The band’s 11th full length album contains musical elements ranging from avant-jazz to prog and post-rock in a 10 track, 42-minute journey of spiritual awakening.

And as the world inches towards some sense of normality, Thrice once again finds itself out on tour promoting its latest release. The stalwart act is set to hit House of Blues Boston this Sunday (October 10th) and WTBU spoke to frontman Dustin Kensrue about touring during a pandemic, fantasy worlds, and whether retiring from the bright lights and roaring crowd is something that he has ever considered.

The interview has been edited for clarity and brevity.

Jean-Paul Azzopardi (JP): Thrice will soon be releasing the physical copy of Horizons/East. Are you excited for fans to get their hands on a physical copy of the record? And what else can we expect from it?

Dustin Kensrue (DK): I personally really enjoy having a physical copy of a record that I love. I enjoy the art form that is an album that can fit on a disk of that size or a vinyl that sounds good. I think it’s a manageable and enjoyable amount of music to be taken together. I’m excited for people to have that in general.

There is a fun thing that comes with it, which is these chromadepth glasses. We use the color spectrum to create a three dimensional space out of two dimensional color images. The album cover looks pretty trippy with those on.

JP: How has it been coordinating and navigating a tour during the pandemic? Does it feel surreal to be back on the road?

DK: It definitely does, but I think that surrealness is fading a little bit everyday. We can’t control what everyone is doing but we are inviting people to wear masks and we’re being super careful ourselves, mostly because we want the tour to go on. No one is backstage except us, even other bands. That’s kind of a weird one, we’re used to seeing people in every city that we see every time.

The shows are really fun, I missed seeing the joys on people’s faces and them singing along with us and it’s been really cool to experience that again.

JP: It has been almost two years since you guys were last in town. How does it feel to be back? Do you have any fond memories of performing in the area?

DK: We’ve always had a really good time in Boston. We always look forward to coming there.

JP: For a band as consistent as Thrice, change seems to be the recurring theme from album to album. The world has also changed considerably over the past two years and not just in terms of the pandemic. What influence have recent events had on Horizons/East, if any?

DK: I don’t know if I would say there are specific events that are represented but the record definitely is wrestling with the more general mindsets and ethos that is I think widespread right now, and probably always is. The record really deals with what it looks like to be open to the world as it is in front of you and to learn to make space for that by not creating walls to hold up your certainties.

I think we really want certainty and we crave that, that’s natural but it can be detrimental. It can close you off to the real world in front of you. That’s really what the horizon is about. It’s about entering a horizontal mindset where we take a step in a direction that isn’t closer to a wall and see a new horizon because it opens up new experiences.

A lot of this record is revolving around being pulled to that central theme.

JP: You pulled a quote from Søren Kierkegaard and posted it on Twitter along with a caption about how much it encompassed a lot of what you’re trying to get at on the new record. Can you explain that a bit further?

DK: It’s fun to see echoes of similar ideas across time and different people’s spins on it. I pulled a lot of the imagery and way of thinking from Dr James Carse and I am sure that he’s read Kierkegaard. Kierkegaard mentions it as a veil that we put up that hides us from reality.

Carse talks about it in two ways, humans and systems. There is a system of inquiry which is how science should function, how religions generally start out. You are taking in all the data and are trying to make sense of it. There’s no end point or closing off but eventually things become systems of belief which is where we start to build that wall and start to ward off things that don’t fit inside because it’s easier to deal with less information.

That quote from Kierkegaard was great. It was really fun seeing it.

JP: You take a lot of inspiration from different works of literature in your music, especially the world of fantasy and science fiction. Let’s say tomorrow morning you wake on your tour bus and you find yourself transported to a fantasy world, what world is that and what character would you be?

DK: That’s a hard question. I’ve been reading about a fantasy world called the Cosmere created by Brandon Sanderson (which he’s still creating) but he has multiple stories on different worlds that are starting to piece together into a larger story. They each have meticulous magic systems that all relate to each other but are different depending on the world, it’s pretty fun.

The other one that came to mind is Earthsea by Ursula K. Le Guin and it’s more the way she writes that I want to inhabit that world. She’s never saying one more word than she needs to say and it creates beauty in that world.

I don’t know if I would be a character. I like creating characters and thinking about them and analyzing them.

JP: What about a creature or race that inhabits that world?

DK: I would be a dragon if it was Earthsea, the dragons are pretty cool.

JP: I know you’re a fan of Lord of the Rings as well. Thrice has a bond similar to the fellowship in the books, but unlike Lord of the Rings, you guys never split up. What’s the glue that keeps you guys together?

DK: I feel like it’s a variety of things, sort of a cocktail. I feel like one of them is the accident of us all being fairly mellow people – no one is really explosive or attention hounding. We don’t have huge personalities that end up clashing. And having that advantage, we’ve learnt to work together and to function as a family over time. In the end we’re united by our love for creating music.

JP: Boston is a big sports city and we often use sports as a main point of reference here, with Tom Brady mentioned often. Thrice has been releasing music for as long as Brady has been throwing touchdowns. Do you feel, like Brady, your work keeps getting better as you get older and wiser?

DK: I know nothing about sports but I’ll take your word on that. I do think that overall our work is getting better.

A lot of people very quickly hearing this record have said that it’s their favourite, which I think is a pretty cool thing because it’s not how things work usually. It takes a while to get the context of something and a familiarity for it to be like that, but I was very excited and encouraged that a lot of people felt that it was up there.

In the end that’s fun but that’s not what matters in the grand scheme of things. We’ve just got to be happy with what we’re doing, and we really are.

JP: What’s your favorite song off Horizons/East to play live?

DK: I’ve been enjoying all of them. Robot Soft Exorcism is a lot of fun.

JP: You’ve been doing this for so long – 11 albums, countless tours, and even one hiatus – and you’re already knee-deep in your next album, Horizons/West. Is retirement something you’ve ever considered?

Thrice will be performing at House of Blues Boston on October 10th along with Touche Amore and Self Defense Family.