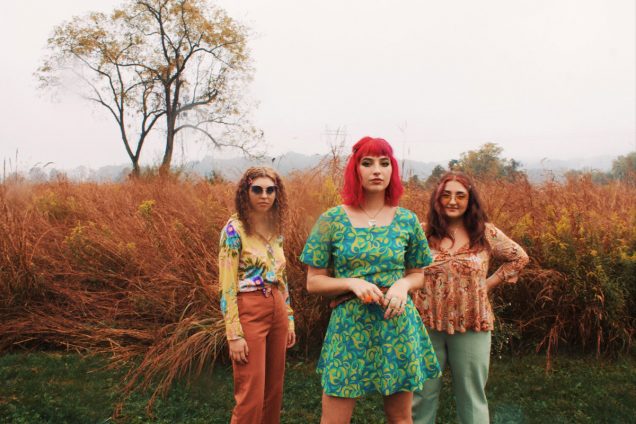 It’s impossible to put a label on Gloss’ sound, and that’s a good thing. Affectionately known to fans as their favorite indie-pop girl group from Philly, Gloss draws on a myriad of styles from Latin Jazz to R&B. Their eclectic style is reflected by their origins as a group at the University of the Arts in Philadelphia.

Singer/keyboard player Sophia and drummer Mollie met in the Fall of 2018 in a Brazillian Percussion Ensemble. Even then, Mollie and Sophia wanted to start an all-female band, but they were unable to: “there was no female bassist at the school so it was kind of just a dream of ours for a little bit,” Mollie recalled. However, the following year, when Harlee began attending UArts, this dream soon became a reality.

The band name came about when they were getting bubble tea and trying to find a name for their group. While putting on lip gloss, Harlee asked “Why don’t we just call it gloss?” to which the others replied, “wait, that’s good” (you can find this information and more Gloss lore on the band’s TikTok, @gloss.band). Just over a year later, Gloss released their debut EP, Entwined.

Just like the band name, the EP name also has a great origin story, as Sophia explained:  “In my tinder bio, I link our music and a ton of guys will message me after they’ve listened to our songs and say ‘I really like how you say entwined in that one song’.” Conveniently, this word ties right in with the main theme of the song, connection. Taking that into consideration along with the Tinder Boys’ compliments, Entwined seemed to be a perfect fit.

Although you’d never know it by hearing the organic, almost live-sounding Entwined, Gloss made this EP thousands of miles apart from each other, recording remotely from their bedrooms in Arizona, New Jersey, and New York. Luckily for drummer Mollie, because school ensembles were recording remotely as well, she had already decided to invest in a full 8-mic recording setup for her kit prior to tracking this EP. Meanwhile, Harlee, Sophia, and guitarist Corinne all tracked their parts using audio interfaces.

The band was also aided by Larry, Sophia’s mom’s boyfriend, who does IT for a recording studio in Phoenix called The Salt Mine. Larry got the band mixing time in the studio whenever he could, which the band is grateful to him for. So, as Sophia said, “if you need IT, call Larry.” The EP was then mastered by Cole Brunson.

As amazing as this was, this meant that Gloss could only secure studio time sporadically, leaving the band with a lot to do in a short amount of time: “Whenever we could get time was when we had to set aside everything to do it,” bassist Harlee noted. The EP’s lead single, “Mariposa,” for example, was started and completed entirely in just one week over the summer. Aside from the intro, which Sophia wrote herself, “Third Person” was written and completed entirely in one night—albeit a very long one—when the band was over at Mollie’s house over winter break. “Me and Mollie stayed up until about 4 a.m. trying to figure out what the fuck to do because it was a mess,” Sophia recalled. Continuing, she said that they did this because they had to: “If we don’t do this now we’re not going to have another song.”

Similarly, Gloss wrote and recorded the EP closer “Walk On” in one night. Even under pressure, the Philly trio still found a way to be creative throughout the recording process. For example, the Latin beat that comes in towards the end of the song started off as just an accident, but this prompted Harlee to say “wait, that’s cool,” so they kept it. Fast forward to now and it’s Sophia’s favorite part of the EP.

Another challenge of remote recording was the mixing process. Because they couldn’t physically be in the studio, each band member had to be painstakingly specific in their mix notes, but, as terrible as it was, Mollie said it was for the best: “We had to see what we wanted and what we didn’t want just so it made the process go by smoother.” Still, Mollie doesn’t plan on making a habit of recording remotely: “I hope I never have to do that any time soon,” she remarked.

Now that Entwined is out, Gloss is proud of their hard work and the end product. Harlee, prefacing it by saying “this is deep,” expressed what releasing Entwined means to her: “I finally have something that I can create and be happy with it and be proud of it and be like ‘I like how I did this, I wish I could have done this.” Sophia added that she completely stands behind the EP: “I’m not embarrassed to show people. I’m like ‘listen to this, I think it’s good’.”

Despite existing almost entirely online as a band, Gloss has cultivated an impressive following on social media and streaming services alike, boasting more than two thousand followers on Tiktok and almost 10,000 streams on their song “Mariposa.” They did this by being true to themselves, which is exactly the advice Mollie would give to creatives right now: “Express yourself; don’t be afraid of what anyone thinks; do what you love.” Additionally, Sophia advises artists to fight the fear: “Don’t be afraid to get weird with it.” Finally, Harlee says to trust your instincts: “Do what feels right to you,” she continued. “As cliche as that all is, it’s the truth.”

Looking beyond Entwined, Gloss has big plans for the future. Before the pandemic, they planned to join New York band Strawberry Launch on their summer tour, which has since been indefinitely postponed. However, they look forward to working together in the future whenever it’s possible. In the meantime, Gloss is working on new music as well as music videos for this EP alongside Destiny Flores, who designed the cover art for the EP and the singles. In the more immediate future, Gloss is playing their first show as a band on June 11th at London Dungeon in Glassboro, New Jersey. More information and updates can be found on their Instagram, @gloss.band.