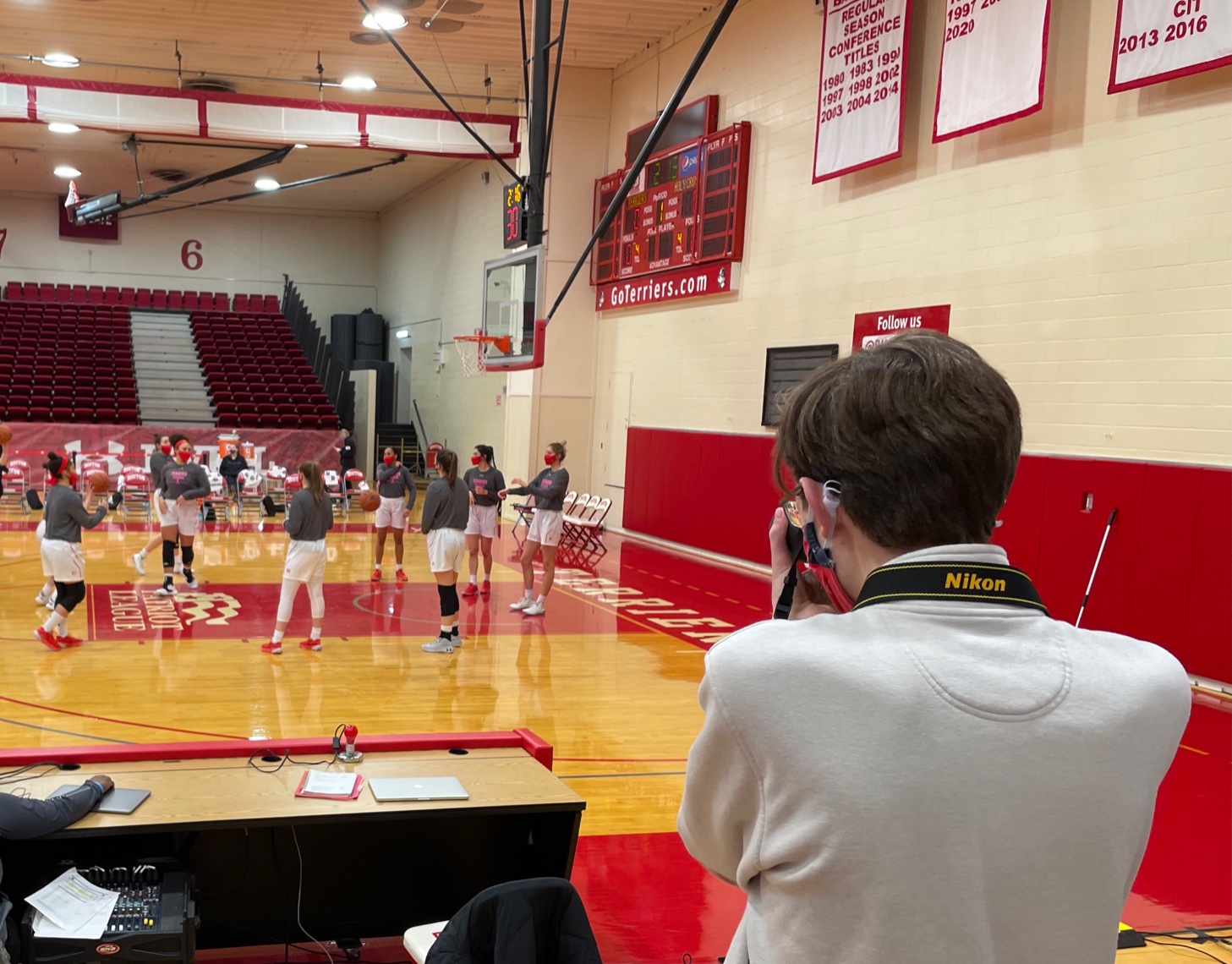 I got to Boston University at 8:00 a.m. in September 2018 having never undertaken any semblance of reporting in my life. Sure, I had read Mirin Fader features, Dan Shaughnessy columns and Woj Bombs. But I had no idea what a lede was, or how Mixlr worked, or even where the basketball teams played.

What came next were powerful lessons, genuine relationships and a developing passion — much of which took place during a pandemic. I didn’t think I’d be able to jump into sports journalism and stay afloat, much less get on a beat and connect with athletes and coaches. It was an amazing three years working with WTBU, and tons of people deserve credit for making me look alright. So I tried to break it into three categories.

Sports journalism — even student journalism — can get stressful. But WTBU has a real history of being a fun place where we can just learn, cover and talk about sports. I’ve had too many friendships to count here.

Andrew Mason showed me the BU reporting ropes, and Greg Levinsky shared my affinity for the most obscure players on any given court. Hannah Yoshinaga and I debated the Patriot League hoops hierarchy. Alex Cohen and Sam Marram laughed at the reality show that is NBA basketball with me. Of course, Patrick Donnelly and Brady Gardner welcomed me on The Duck Boat Report, roomed with me and helped start a Mario Super Sluggers franchise mode. Daniel Multz and Chad Jones made joining the radio show a rite of passage… man, should I keep going?

Everyone mentioned and unmentioned not only made me a better writer and broadcaster, but also made college fun when it could get frightening. I’m sad and excited to watch what they all do next.

Then there are my two most popular email recipients, and two of the most underrated resources at BU. Meg Kelly and Scott Ellis were endlessly patient and accessible as I learned the BU basketball beats. I had so many conversations with Meg, from my first time walking onto Nickerson Field after a soccer game to the countless loitering periods at Case Gym. Scott and I talked about Santi Aldama, BU basketball and sports media today. They both helped me out anytime by arranging interviews, granting game access and pointing me in the right direction for stories.

That becomes one thousand times harder during a pandemic. In March, BU had over 20 sports teams in action, and Meg and Scott are part of the five-person SID team who found entire years of work packed on top of each other — with new COVID-19 guidelines. They still made room for my requests, and I’m indebted to them.

Lastly, I especially want to focus on the athletes that I covered while with WTBU. Something I’ve learned in three years is that good stories come from a two-way street of respect between reporter and subject. Sure, a journalist can ask all the right questions, but it takes a great deal of vulnerability from an athlete to entrust their emotions and insecurities to a stranger. That’s especially difficult to do in the “there’s no crying in baseball” culture that still influences athletics.

Right from my first interviews with Katie Nelson outside of Case and Ethan Brittain-Watts in the bleachers, the people I met gave me their trust. Joe Jones, Marisa Moseley and the basketball coaching staffs may not have always wanted to break down a loss, but they provided detailed insight after every game. They did the same thing when I asked them about their journeys as Black coaches in the systemically racist U.S. college coaching cycle.

Walter Whyte expressed a profound love for his mom after growing up in the tougher neighborhoods of New Haven, CT. I talked with that mom, Catherine Hammie, for nearly two hours about the work-life-child balance of single motherhood. Annabelle Larnard and Mackenzie Miers told me about finding self-motivation — and sharks. I couldn’t imagine myself in their shoes, revealing foundational pieces of myself while knowing that it could go public. Every writer should feel appreciative when an athlete or coach opens up.

College basketball in Boston feels undercovered to me. It’s a growing observation I’ve made over the last three years. This is a city with the winningest franchise in NBA history and a rich tradition of exciting and talented players at all levels. But when I covered games for WTBU, or occasionally on assignment for the Globe, I encountered more than my fair share of one-on-one postgame pressers. The Daily Free Press and I were the only outlets truly on the BU basketball beat. I could be wrong, but I’d imagine this is what it’s like for the other mid-major schools in the city.

The greatest lesson I learned while reporting for WTBU is that every athlete and every coach has a story worth sharing. And in Boston, where there is a passion for sports and a fervent love of basketball, an untapped market for college coverage exists.

I’m off to the madness of the sports journalism workforce. But my run covering BU basketball has reaffirmed my initial hopes from that September morning in 2018. I want this — I want to be a part of progress in sports. Who knows where the path leads, but I have hope that I’ll be back on Case Gym’s press row sometime soon.