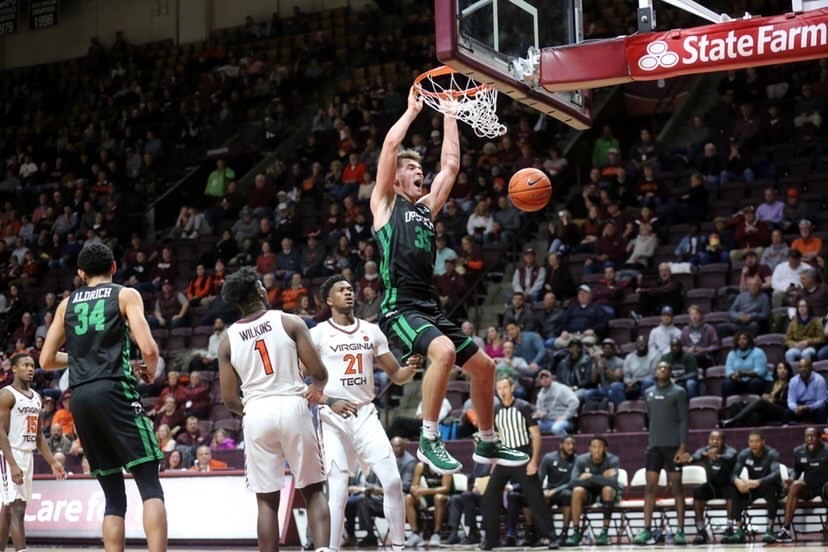 College basketball madness has extended well beyond March this year by virtue of the transfer portal. Over 1500 players have entered their names, with schools finding opportunities to add new pieces to their rosters.

Zink chatted with me about navigating the transfer process, his fit with the team, and his appreciation for the early-2000’s Boston Celtics.

Ethan Fuller: I guess I’ll start just with the transfer situation. How was it for you, navigating the portal and getting in contact with coaches?

Nevin Zink: It was definitely, definitely different. I never went into Upstate with an intent to transfer, and then obviously I didn’t know what everything was about once you get into the portal. So when I went in there, immediately schools start reaching out, through email or DM on Instagram and Twitter.

I think the big difference is everything was through Zoom, and you can’t really set up official visits once school officially offered. So that that was the big difference. But I think a lot of the coaches, during the process throughout and especially Coach Jones and his staff, did a great job of just trying to make it as close to normal as possible — having that face-to-face contact, always calling and checking in. So even though it’s so different, the coaches did a really good job in navigating [and] making me feel comfortable with my decision.

They expect you to ask those tough questions, because you can’t really see everything in its entirety. But yeah, it was a lot different, but it was good though.

EF: What was BU’s pitch to you that ended up convincing you?

NZ: Coach Jones reached out, I think it was a few days after when I was in a portal, and he handled everything. Coach Jones, he’s such a great guy; he’s super energetic and he loved how I played. He watched a lot of my film and was breaking it down, and he just liked my style of play and thought that I fit perfectly into their BU system. I’m all about the team and program, and that’s what I told him.

They do reference calls to other coaches and he’s like, look, just bring in that that mentality — that mindset to BU — and we’re gonna cut down some nets and win a lot of games. His pitch was amazing, and I definitely just want to bring my competitive motor to him, and he knows that. I knew that he cared by how involved he was throughout the recruiting process, and how much film he watched, and how he was texting me. Like, hey, you need to do this, or you got to get better at this, or you’re really good with this. He did a lot of his homework and I felt at home right away the second he called.

EF: Were there any other schools that were in the running for you?

NZ: There definitely were. I was hearing from a lot of schools in the Horizon League, CAA, West Coast Conference, the WAC and Big Sky, and a lot of other schools offered [from the] Southland Conference and New Orleans.

So I was hearing from a lot of schools, but throughout the process, I was just trying to take my time to try and find the right fit, and do my homework and my due diligence and research everything on my own. I was actually able to go up myself — wasn’t able to meet with the coaches or anyone — but I was able to visit BU, which was very advantageous for me to see what it was like.

I’m a New Englander too, so I’ve been around Boston before. I felt very comfortable with that decision… There were other schools, but I knew the second BU called, I kind of had an idea.

EF: So you’re so you’re from Newtown, CT. Where does that put you on the Boston versus New York City sports fandom?

NZ: I’m all Boston. Everything Boston. I’m a big Celtics fan — Big Three, love Ray Allen. I know he left for Miami [and] some people don’t like that, but that’s one of my favorite players all-time. And obviously the Patriots and Tom Brady, so I’m a big Boston fan.

EF: When you played in high school, did you ever cross paths with Jonas Harper and Walter Whyte?

NZ: I did not. I did not know them… Last year over the summer I played against Walter in pickup in Bridgeport, CT. I met him through that, and he was obviously a really good player and I talked to him, so going into [transferring] when Coach Jones reached out, I told him, “Hey, I kind of know Walt. I haven’t talked too much but we played pickup with each other a couple times.” I didn’t really know know him, but playing against him, I knew his style, and obviously I watched a lot of film so I could get a good feel for how they like to play.

EF: You are what BU loves: kind of a classic post player who really is tough inside, sets good screens [and] rebounds the ball really well. What do you think about your fit with BU on the court?

NZ: I think it fits really well. It’s similar to how I played and how I’ve always played — just being very competitive and tough in everything that you do on both ends of the court, both sides of the ball. When I saw some film, when I looked it up, they’ve had some really good bigs in the past with how they do pick-and-rolls. They want to be able to stretch the court. That’s the one thing I’m really working on this offseason — that free-throw-line jumper, 15-foot jumper, so I’m not always in pick-and-roll.

That’s what I mostly was at Upstate. I do feel comfortable with my shot, but within our offense at Upstate, it was iso [and] post, and back-to-the-basket is my big strength. That’s where I feel I could go over both shoulders. That’s what I feel super comfortable with — and the pick-and-roll. I think that’ll translate really well into Coach Jones’s system, because they definitely do a mixture of everything. I’m pumped.

EF: I know you mentioned Ray Allen, but what other players did you grow up watching or watch now whose style you appreciate?

NZ: Definitely Kevin Garnett. His tenacity and competitive drive… If you tried talking during a game and you’re on the other team, he was gonna shut you out. If you’ve ever listened to the podcast of Joakim Noah trying to ask him what his favorite move was, Kevin Garnett was like, “Don’t talk to me in the middle of the game.” So I always admired that competitive drive. You don’t have friends on the court; you’re not supposed to be talking to the other team like that. I want to win, I want to beat you and that’s that, and move on.

So definitely Kevin Garnett. I love Rondo —  just how he dived at 50-50 balls, doing everything to win. And now, obviously it sounds cliche to say, but LeBron is just unbelievable. Westbrook, Giannis, [I] try to watch them, but mostly I just grew up watching that Big Three team.

EF: Between high school and through these three years that you played at Upstate, where do you think you improved your game the most?

NZ: Definitely in the post. Crazy thing is, I really started taking basketball seriously my junior year of high school. That’s when I hit my growth spurt — end of sophomore year into junior year of high school. I was playing JV and a little bit of varsity my junior year. Once I started growing I just really fell in love with it later on, so I’m gonna do whatever it takes. When I first started, I said, if I want to be super hard to guard in the post, I need to use both hands. At first I was just trying to go to my right, but now I’ve gotten so comfortable with my left. I think throughout that time, people have started to think that I’m lefty, because I work on it so much.

I think that the lefty hook definitely developed big-time, and just my overall feel for the game — reading things, anticipating instead of just reacting, I think. And then, defensively, I think I’ve gotten a lot better rebounding and just being solid on both ends of the court.

Ethan Fuller: I know it’s pretty early, but what do you expect out of yourself for next year?

NZ: I just want to be that dominant presence down low and within the mid-range, to put a lot of stress on other teams within the conference and nonconference. The whole schedule, I just want to be that guy where it’s like, hey, he’s not playing around when he steps on that court. I want to put a lot of pressure on the defense and make it hard for the whole offense be guarded — not just me, but the guards on our team. Just try to help out [and] be that dominant presence down low. Attract double teams, hit my teammates that are open, and just try to make the offense super easy for everyone.

I’m just expecting to go in, give it all I got, just be super competitive like I always am, be about the team and let the rest just handle itself. But definitely I expect to be winning at a high level with my teammates, and help bring them to the Patriot League championship and beyond.

EF: You get one pregame hype song. What are you going with right now?