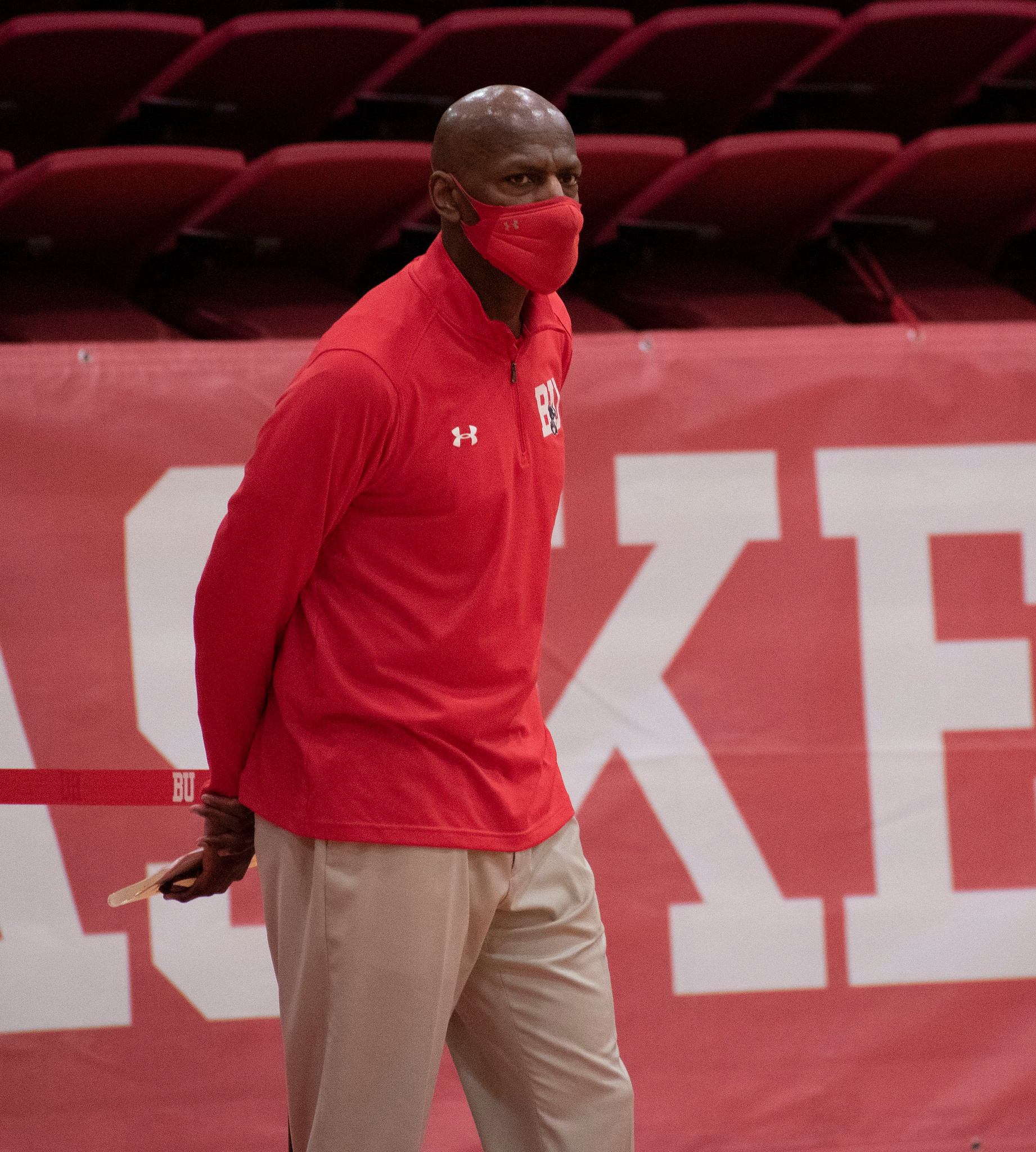 Joe Jones is now the second-longest-tenured head coach in the history of Boston University men’s basketball. But to Jones, his decade at the helm has flown by.

“Some days you look back and are like, ‘Wow. A lot of time has passed,’” he said in an interview with WTBU last week.

The 55-year-old has steered the program through all sorts of ups and downs in ten years, including a conference change, a Patriot League title and a pandemic. As Jones has evolved, so has the game of basketball — and that’s what keeps him coming back for more.

A decade may not feel that long to Jones. But the college basketball landscape is worlds different; just look at the thousands of names in this year’s transfer pool. When Jones moved from an associate role at Boston College to lead BU in 2011, Facebook was all the rage and Twitter had only just taken off.

Today, those platforms, as well as Instagram, Snapchat, TikTok and more, have given recruits and college players platforms that pros could not even access. Jones has had to work with what hoops culture serves its young talent.

“With the way people view our sport — it’s almost like an individual sport now,” he said. “And it comes from the NBA; it starts there. Free agency has just trickled down to college sports now. Get as much as you can, and if you’re in a situation where you’re not getting what you want, go elsewhere. And that has resonated in the college game.”

For coaches at any level, the challenge becomes: how do you help players with so many individual spotlights learn how to take a back seat?

“You can’t have a successful team if guys are thinking that way,” Jones said. “It doesn’t work. So you have to have a group of guys who aren’t thinking the way the average kid is thinking and the people around them are thinking… You’re always fighting that now, and trying to help kids understand that: they’re going to get so much more out of [college sports] when they give more to the team.”

Player development is a point of pride for Jones. He mentions Justin Alston, a former Terrier from 2012-2017 with “unbelievable positivity,” as someone who transformed his game while in Case Gym. Another is Sukhmail Mathon, who exploded from a quiet, glass-cleaning big to a complete post scorer this season. The development track isn’t smooth — but the payoff is rewarding.

“[Sukh] really wanted this — bad,” Jones said. “Early on, we would butt heads. But the thing with Sukh is: you could butt heads, but then he would go play the right way. He would go help you win games. And he wasn’t always happy with his role or how he was being used… but he would always go help you try to win a game. To me, he manifests winning. He’s a winner.”

Any coach will say their profession is a constant learning experience. Jones emphasizes maintaining a “growth mindset” as a member of the program. For him, that growth continues whenever he forges a new relationship.

“Sometimes as a coach, you have your own goals and your own thoughts, but you have to meet your kids where they are,” he said. “And to do that, you gotta listen. You gotta allow yourself to be a little vulnerable. You don’t have all the answers; you have to listen. That’s one of the things I think I’ve gotten better at — just listening to guys and asking them questions.”

On the other end of the timeline is Max Mahoney, whose senior leadership spearheaded the Terriers to their first Patriot League title in 2020. Jones referenced Mahoney’s unflinching selflessness; the former center would not even complain when he barely got shots in some games, despite being the go-to option.

“You’re not winning this without leaders in that locker room doing the things that you’re asking the team to do at the highest levels. You’re not winning — it doesn’t happen. So you have to have guys that will do that, and Max was an unbelievable example of that,” Jones said.

Continuity is hard to come by at the mid-major level of college basketball. Jones appreciates the extended run he’s had with the core members of the coaching staff. Assistant coach Mike Quinn and Director of Operations Al Paul have been with the team for three years. Walt Corbean is a seventh-year Terrier assistant. And Curtis Wilson has patrolled the bench with Jones for the entire decade-long run.

Those friendships extend off the court. At one point, Jones, Wilson and Corbean all lived in the same neighborhood. Their children have even become friends.

“They’re the type of people that you want to be around every day,” Jones said. “I consider them my brothers.”

The former Columbia head coach and Villanova assistant has the second-most wins in BU program history. But for a long time, the conference title eluded Jones and BU. They got right to the doorstep on some occasions. The 2013-14 season saw BU go 15-3 in the Patriot League, host the league title game, and lose 55-36 to American. In 2016-17, the Terriers lost to Lehigh on home court in double-overtime of the Patriot League semis after going 12-6 in conference.

“If I had to look back, I would probably talk about those moments that we didn’t get it done, that I wish we would’ve had a little more success,” he said, referring to his biggest challenges.

“If you’re in this, you’re competitive, and you want to win. I’m not going to shy away from that,” he added.

Where does Jones go after the toughest defeats? His wife, he says, is patient with his emotions. His brother James, Yale’s head coach, and Villanova head coach Jay Wright are two people he leans on the most. Pat Chambers, the previous Terrier head coach, and former assistant Jack Perry are among other confidants.

“Sometimes talking to people that aren’t in it — but that know you — is helpful,” Jones said.

The what-could-have-been’s sting to this day. So when Jones and BU finally broke through last year and took down Colgate for the title, it reaffirmed to the head coach, the staff, and the players, that the foundations laid in practices for the past decade work. As the celebration commenced at Colgate, Jones said he stepped aside to watch everyone around him in their moments of triumph.

“There’s always people that are gonna question whether you can do it or not,” he said. “That’s the kind of business we’re in. You have to have success; that’s just the bottom line.

“Yeah, it was a big moment [for me]… but it was a bigger moment for my staff and my players, and the people that consistently were by our side.”

Jones couldn’t tell you what’s coming for college basketball in the next decade. He’s already thinking about how to maintain continuity and navigate the massive transfer portal (BU has made one addition for next year in big man Nevin Zink). But he considers his adaptability a strength, and relishes the process of building a successful team.

“When the ball goes up, there’s no better feeling then watching a team having success and watching guys develop. And those things are important,” Jones said. “But the other part of [coaching] I like is this ever-changing, evolving thing that we do. I love the change. Sometimes I’ll complain about it, but I like it.”

“I get enjoyment out of putting the puzzle together. I spent the whole offseason trying to figure out how to win a championship, and when we won it, it was very gratifying. I want to do it again.”