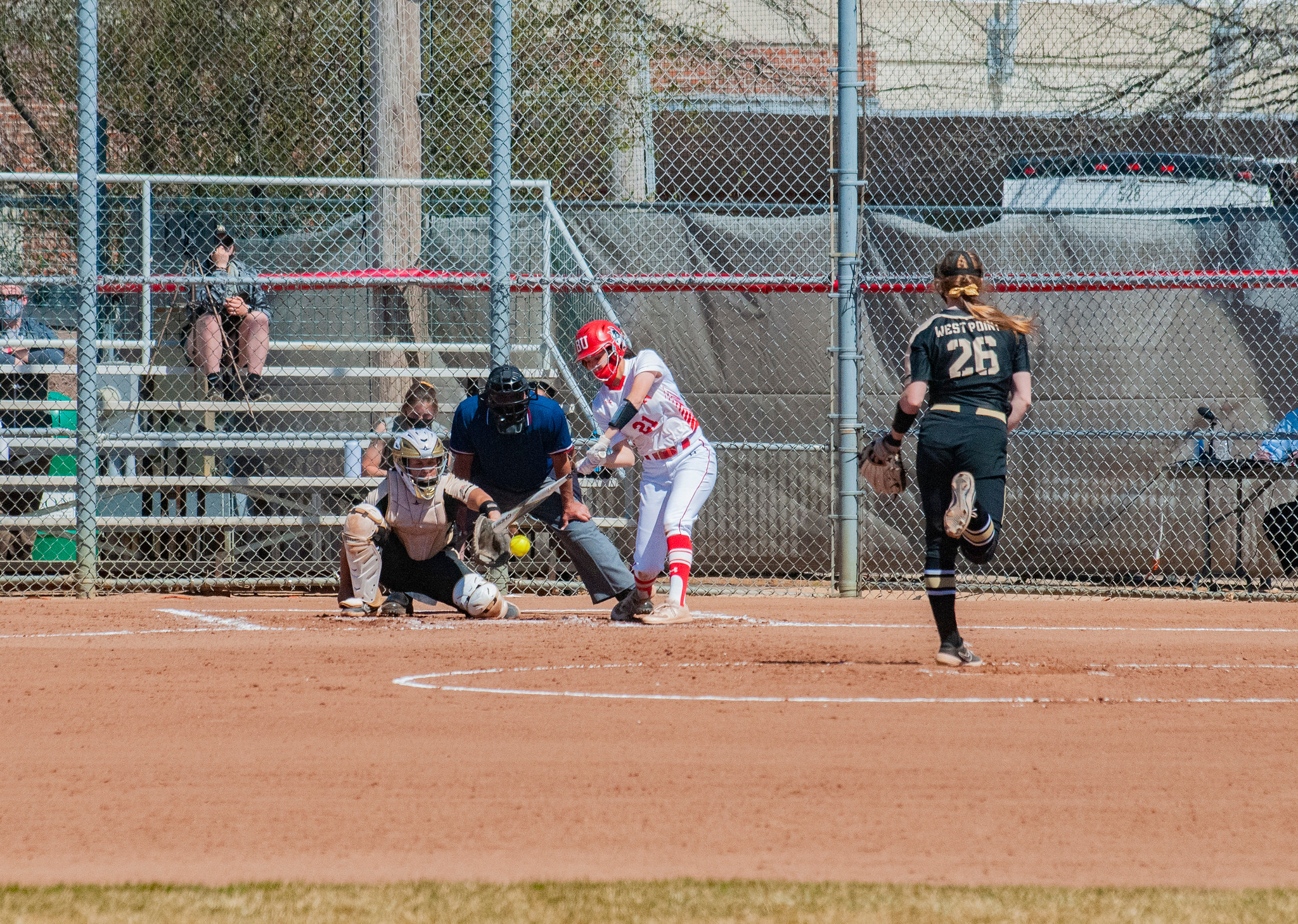 Boston University softball won three of four games in its series against Army West Point last weekend, extending its conference-record win streak to 17 games before dropping a game Friday afternoon for its second loss of the season.

Though the Terriers now boast an 20-2 overall record and a 9-1 conference record, the loss snapped their NCAA-leading active home winning streak of 28 games.

The Terriers took Game 1 from the Black Knights with a final score of 1-0.

Despite allowing multiple baserunners in the first two innings, senior pitcher Ali DuBois got herself out of both jams and did not allow any runs.

BU’s offense remained quiet until the second inning, when senior outfielder Jen Horita doubled and eventually reached third on a sacrifice bunt. The Terriers were unable to convert, and the score was tied headed into the third.

However, power-hitting freshman outfielder Kayla Roncin started off the bottom of the third with a blast to center field, proving herself to be BU’s secret weapon for the second week in a row.

Though BU did not score another run, DuBois retired the final 14 batters she faced to keep Army scoreless. DuBois, who was named Patriot League Pitcher of the Week last week, now has a 13-0 record on the season.

The Terriers did not fare as well in Game 2, which they dropped 7-4 after making a series of errors.

Junior pitcher Emily Gant put two runners on base after two consecutive hit-by-pitches, and an error on the defensive end allowed one to score.

In the third, BU’s defense faltered again and made three errors. The Black Knights capitalized and extended their lead to 3-0 on a pair of RBI singles.

The Terriers’ troubles continued into the fourth inning. A two-run single by Ally Snelling and a two-run homer by Megan Muffett blew the game open and brought BU’s deficit to seven runs.

While BU was able to load the bases in the bottom of the fourth, the team’s only two runs came off a HBP from sophomore infielder Caitlin Coker and an RBI groundout by freshman pinch hitter Lauren Nett.

Coker cut the deficit to just three runs after she hit a two-run home run in the sixth, but the Terriers were unable to catch up in time.

After both games, head coach Ashley Waters said there was room for improvement in both games for BU.

“I thought we played better in Game 1, I think we left a lot of runners in scoring position, so we need to execute, especially against a really good team like Army,” Waters said.

After a subpar performance Friday afternoon, the Terriers swept the Black Knights in their Saturday double-header.

The Terriers loaded the bases in the bottom of the second, but were unable to pad their lead.

In the following inning, Muffett sent a two-run shot to right center to cut the Black Knights’ deficit to one run.

Army threatened to add more runs when two hitters reached base, but were stymied by DuBois.

Nett’s fifth-inning RBI single brought the Terriers to four runs, which proved to be enough to secure a 4-3 win.

The Terriers’ Saturday afternoon match was a much different story, and they took Game 2 by a 8-0 score in five innings.

BU put its first three runs on the board in the third inning. Junior outfielder Aliyah Huerta-Leipner reached second base on a wild pitch and throwing error, which gave Coker enough time to score. A double from senior utility Marina Sylvestri scored Huerta-Leipner, and a single by Horita brought home pinch runner Reagan Kelly.

Nett scored the Terriers’ final run of the afternoon after Gant reached first on an error.

“For us, I think that’s a really strong team, a really good team and we have to play championship-caliber softball to beat them and I thought today was a much better day than Friday, so if we’re learning and getting better, we’re going in the right direction, so I was happy with that,” head coach Ashley Waters said post-game Sunday.

The Terriers travel to Lewisburg to face Bucknell for four games next weekend. BU currently sits in first place in the Patriot League, while the Bison are in second.