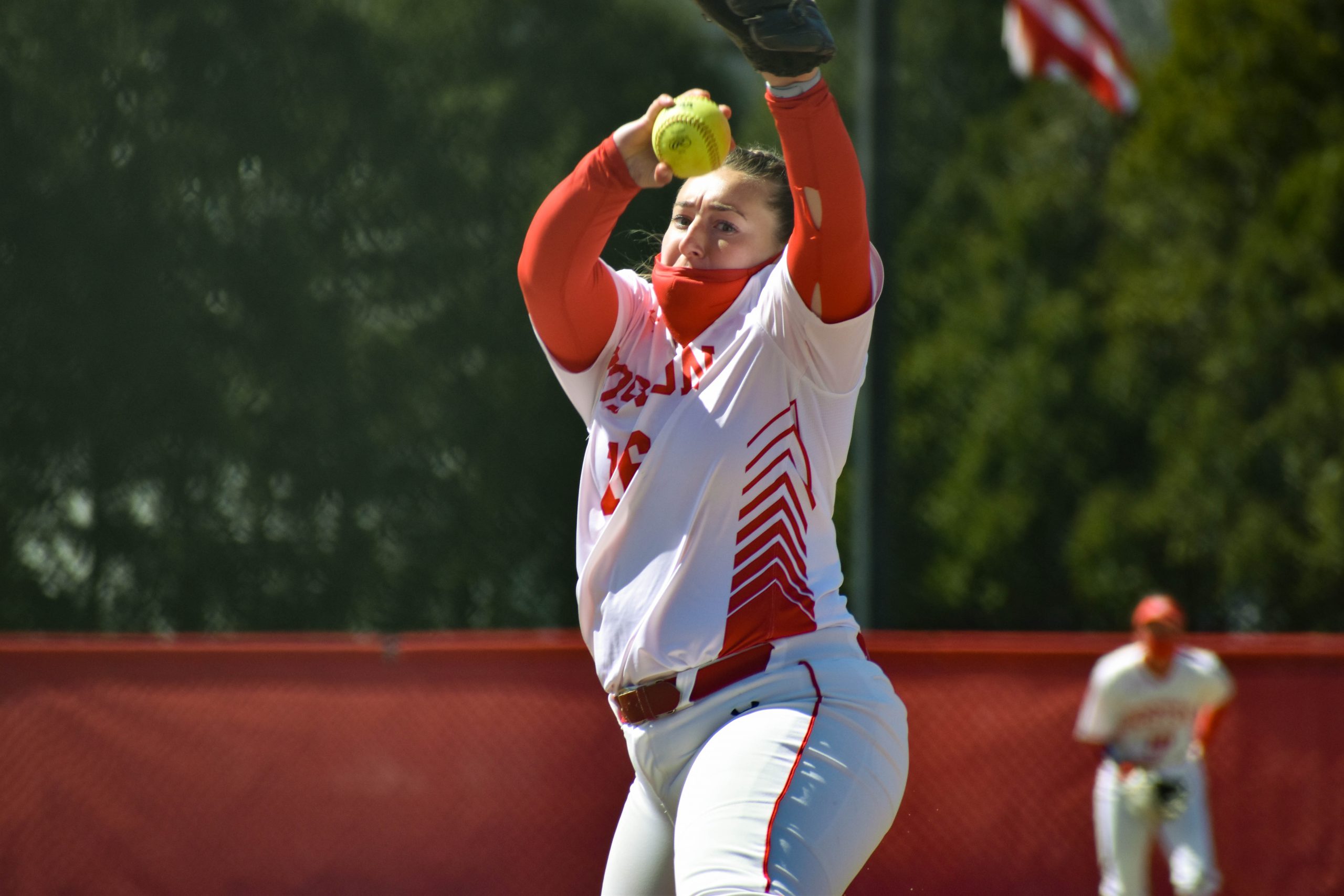 Boston University softball swept its four-game series against Colgate University last weekend, extending its Patriot League winning streak to a record 16 games. The Terriers (17-1, 6-0 PL) have now won 27 games in a row at home, which leads all active NCAA teams.

The Terriers picked up their first win in Game 1, finishing with a score of 6-1. Senior pitcher Ali DuBois earned her 10th victory of the season, allowing just one hit all afternoon.

The Raiders’ Kara Fusco scored in the second inning on a walk to cut the deficit to three runs.

Both teams failed to plate any additional runs until junior outfielder Aliyah Huerta-Leipner tripled in the fourth to score freshman outfielder Lauren Keleher.

Gant’s groundout in the sixth brought home sophomore infielder Caitlin Coker to increase the Terriers’ lead to five runs. DuBois sealed the win in the top of the seventh inning with three quick outs.

The Terriers defeated Colgate in Game 2 behind a 6-5 score, despite finding themselves in an early deficit.

Though sophomore pitcher Allison Boaz got through the first inning easily, she gave up home runs to the Raiders’ Taylor Ludwick, Adrienne Nardone and Steph Jacoby in the second and third. BU Head Coach Ashley Waters subsequently sent Gant to the circle to finish off the game.

BU rallied back to tie the score at 3-3 in the bottom of the third inning, with sophomore catcher Audrey Sellers, Keleher and freshman infielder Alex-Rose Molinar reaching home plate.

The Terriers broke the tie in the sixth when Sellers’ groundout scored Horita. Coker plated two more runs with a single.

The Raiders continued to challenge BU, and Colgate’s Jacoby and Mia Guevarra cut the lead to 6-5 in the seventh. However, Gant and the Terriers’ defense protected the lead and closed the game.

BU collected another 6-1 win in their first game Sunday as DuBois cruised through another seven innings of work.

Colgate jumped out to an early lead after Jacoby homered in the second, but the Terriers evened the score in the bottom of the inning with an RBI single from Amodio that scored Horita.

RBI singles by Horita and Coker in the third and fourth innings added three runs to the lead. Sellers started off the sixth with a homer to left field, extending the Terriers’ advantage to four runs. Coker’s flyout in the sixth brought home senior infielder Patricia Dun to put the game away.

The Terriers completed the sweep Sunday afternoon after battling to a 5-4 victory.

Sophomore pitcher Lizzy Avery started the contest, but was pulled after giving up a home run to the first batter she faced. Waters sent Gant into the game, and Gant kept the deficit at one run until the fourth.

BU took the lead in the bottom of the fourth off a triple from Huerta-Leipner that scored Coker and freshman infielder Kate Pryor. Huerta-Leipner came around to score later in the inning when senior utility Marina Sylvestri sacrifice bunted.

However, Jacoby put the Terriers into a deficit yet again when she hit her second homer of the afternoon, allowing pinch runners Elizabeth Nitka and Gigi Venizelos to score.

Roncin evened the score at 4-4 in the seventh with her own two-out home run to left field.

“I couldn’t have yelled louder, it was insane,” DuBois said after the game. “I’m so happy for her as a person, as a player, we all know what she can do and she’s had some rough days, but she’s one of the best hitters I’ve ever seen and she proved it today and she’ll keep proving it all season.”

DuBois kept the Raiders at bay in the top of the eighth. Keleher led off the inning with a walk, which was followed by a single by Huerta-Leipner. Horita fought through an eight-pitch at-bat to earn a walk, loading the bases.

Amodio took the first pitch she saw and singled, bringing home Keleher for a walk-off win. The single was her third game-ending hit during the Terriers’ 27-game home winning streak.

While it was a challenging afternoon for the Terriers, the series helped the team identify areas of improvement moving forward.

“This was probably a great series to see where our weaknesses really were and what we need to fine-tune,” Waters said.

Despite the errors, Waters said she was pleased with the team’s overall results.

“I’ll take two wins, whether they’re good, great, ugly, whatever,” Waters said. “I’m just happy that we get to walk away with four wins.”

BU now has a 6-0 record against Patriot League opponents this season.

“Coach always preaches that everyone wants to take us down because everyone knows how great we can be and I think that being 6-0 doesn’t change that, there’s still a target on our back and we still have to show up to the field every day,” DuBois said.

BU will be put to the test next weekend when the Terriers return to the BU Softball Field for a four-game series against Army West Point, which currently sports a 2-2 record in conference play.