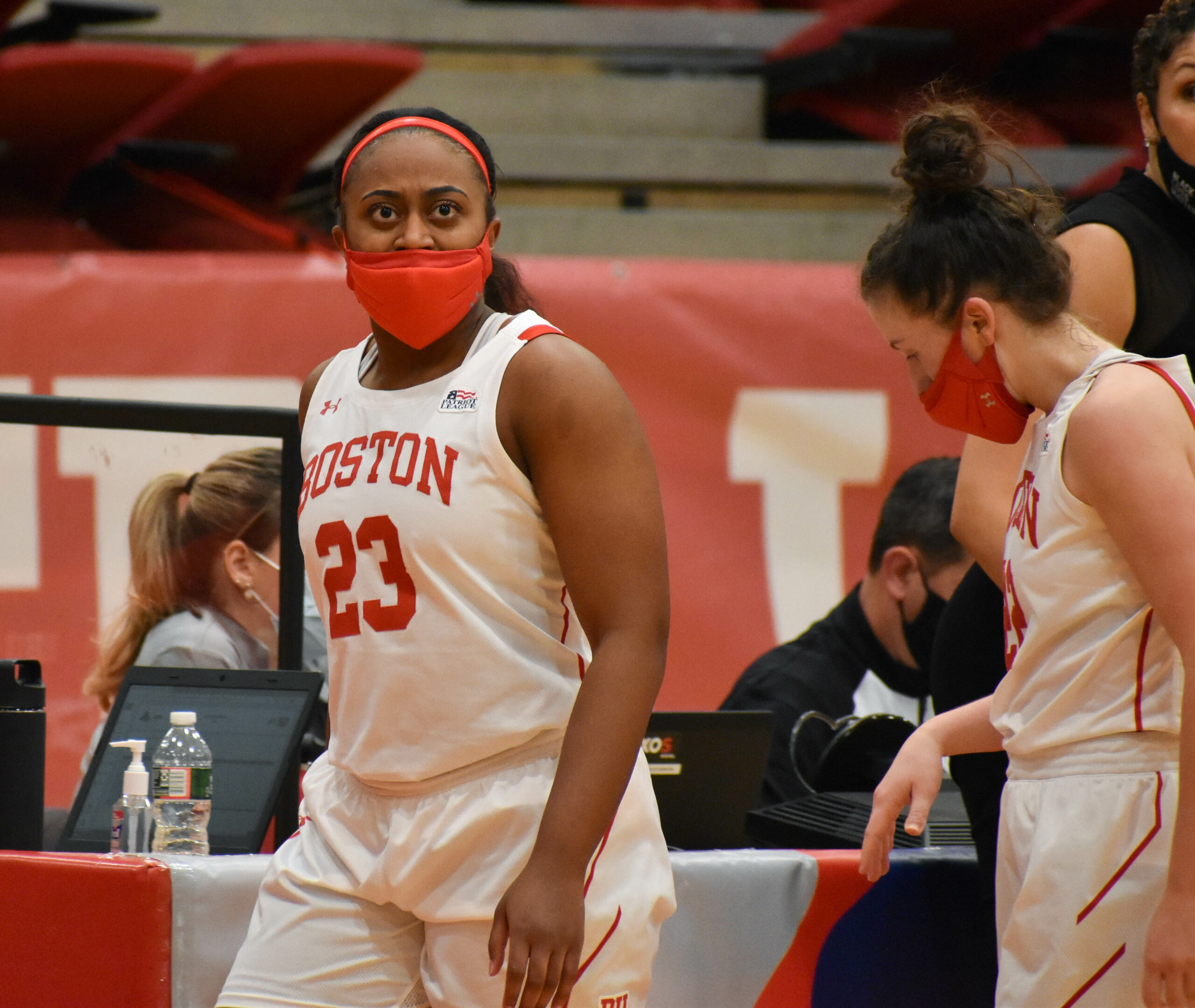 When the final buzzer sounded in the Patriot League championship game at Case Gym, it ended the tumultuous basketball career of Tenisha Pressley.

A 5-foot-9 wing, Pressley faced plenty of adversity in her time as a Terrier, including a coaching change, multiple injuries and a global pandemic. But the versatile defender stayed resilient and helped Boston University women’s basketball reach newfound heights in the Patriot League.

I caught up with Pressley to talk about how she persevered, what she valued about her college hoops experience, and where she’s going next.

Ethan Fuller: What does it feel like for college basketball to be done?

Tenisha Pressley: It still is kind of surreal to me because I’ve been playing basketball since I was in kindergarten. So to not have to practice or go to a workout — I only work out if I want to work out. It’s hard to think that this is not a spring break or something. It feels like I’m just going to come back in a couple weeks and we’re going to start up workouts again and I’m going to be with my team again. It hasn’t really hit me yet, and I don’t think it’s going to hit me until I don’t come back for summer session 2 and I see the rest of the team come back to Boston.

EF: What does it mean for you to have gone through all of these ups and downs with [fellow seniors Mackenzie Miers and Katie Nelson]?

EF: How much harder was it to be a senior leader during COVID?

TP: I definitely think [that] for us, it was building that relationship with the freshmen because we didn’t have that normal summer session that we usually do. The coaches appointed me and Kenzie to be mentors for them [and] just to try to have Zoom meetings, have texts, text them often just to make sure we wouldn’t miss a beat.

Obviously it was going to be different, but we still wanted to have that relationship with them over the summer. So I think that was probably the hardest part — just not having that initial interaction with the freshmen. But once they got here –granted, COVID made it hard to hang out at times, but we still were able to build a strong relationship in my opinion.

So it was that, and just keeping up the mental aspect of the workouts. You have to tell yourself you’re home for six-ish months. You have to be disciplined enough to work out, keep up with your craft, and condition and everything like that. I think that was also a mentally tough piece.

EF: What was the most challenging parts of college basketball for you personally?

TP: I’ve had a lot of injuries — like, nagging things that kind of bothered me, especially my first couple years here. And it was just mentally getting through that — being away from my family, not having them there to just, be there, because I’m very big on family. That’s a very important piece of my life.

But again, I think it was also mentally growing and learning to push through certain things, but also knowing my body and knowing when I can’t take something anymore. When I need to actually say, “You know what, something isn’t right.” You need to speak up and say something for yourself. It was just learning about who I am physically and mentally.

EF: What were some examples of these injuries that challenged your perception?

TP: Coming into freshman year, I tore my meniscus before freshman summer and it kind of flared up again, and nobody knew why. That’s what happened with a lot of my injuries — nobody know exactly what it is. Then I came back in September and we found out it was torn again, but it was one of those [situations where] I got a Cortisone shot and just had to push through the pain because I didn’t want the surgery at the time. By the time the end of the season came, the Cortisone shot was still working, so I just pushed through that.

Sophomore year in October, I had a stress reaction in my femur. I was out on crutches for six weeks and had to fight back through that injury. And my knees have just been a constant problem my entire life; I have arthritis in my knee. So just pushing through that — it really hit me freshman and sophomore year. But once I got to junior year, I knew what treatments and stuff would work for me so that I wouldn’t have to miss practice and be out or anything.

EF: Where did you go to make yourself feel safe and not let that overwhelm you?

TP: For me, I’m a pretty religious person. I always prayed a lot, and I just know everything happens for a reason. God doesn’t put too much on you that you can’t bear. So that’s really what kept me going, along with my teammates and my friends and family just always there. Knowing they’ll be supporting me and making sure I’m okay, but also knowing I’ll still be on the sidelines cheering my teammates on.

Seeing how successful we were my sophomore year when Coach [Marisa] Moseley first came on definitely helped the feeling [that] I don’t feel like I’m missing much. By December, I was finally back, which was nice.

EF: On the flip side, what would you say is your most proud moment you made being at BU?

TP: I think it would be our Alumni game last year against Holy Cross. Just the atmosphere [and] just the whole day in general. We had the Alumni game, I got to see all my old teammates and friends, and then when it came to game time, I don’t know.

The energy from the crowd — we were down 16 or 17 at some point, and just being able to battle back — it was just so fun to be able to play then. I’m not a scorer, but being able to step up and hit big shots and stuff like that really just felt good. And in the locker room after, all the alumni came in and celebrated with us. I think that’s one of the biggest moments of my career.

EF: I know nursing school was on your radar. Did that affect your decision not to use the extra year of eligibility?

TP: Pretty much, because with nursing school I knew that was what I wanted to do. It would be very hard for me to do basketball and that, too. Like I said, I’ve been playing since kindergarten, so it’s just kind of time for me to put the basketball piece of me to bed and just move on with the next chapter.

EF: Where are you going for nursing school, and is there a specific concentration you’re thinking about right now?

TP: I’m going to Drexel starting in September, and the program is only 11 months, which is nice. I’ll be going straight through for four marking periods. Eventually, after I start working in the field, I want to go back and become a nurse anesthetist. So basically, an anesthesiologist without all the extra school. That’s the ultimate goal. That’s what I’ve had my mind set on, but I’m also looking forward to seeing what other nursing options are out there.

EF: Looking back, what would you tell freshman Tenisha Pressley, walking in that first day of summer sessions?

Everything happens for a reason, and when you come out of it you’re gonna grow in so many ways and create relationships with so many people that you know will be there for the rest of your life.

This interview has been edited and condensed.