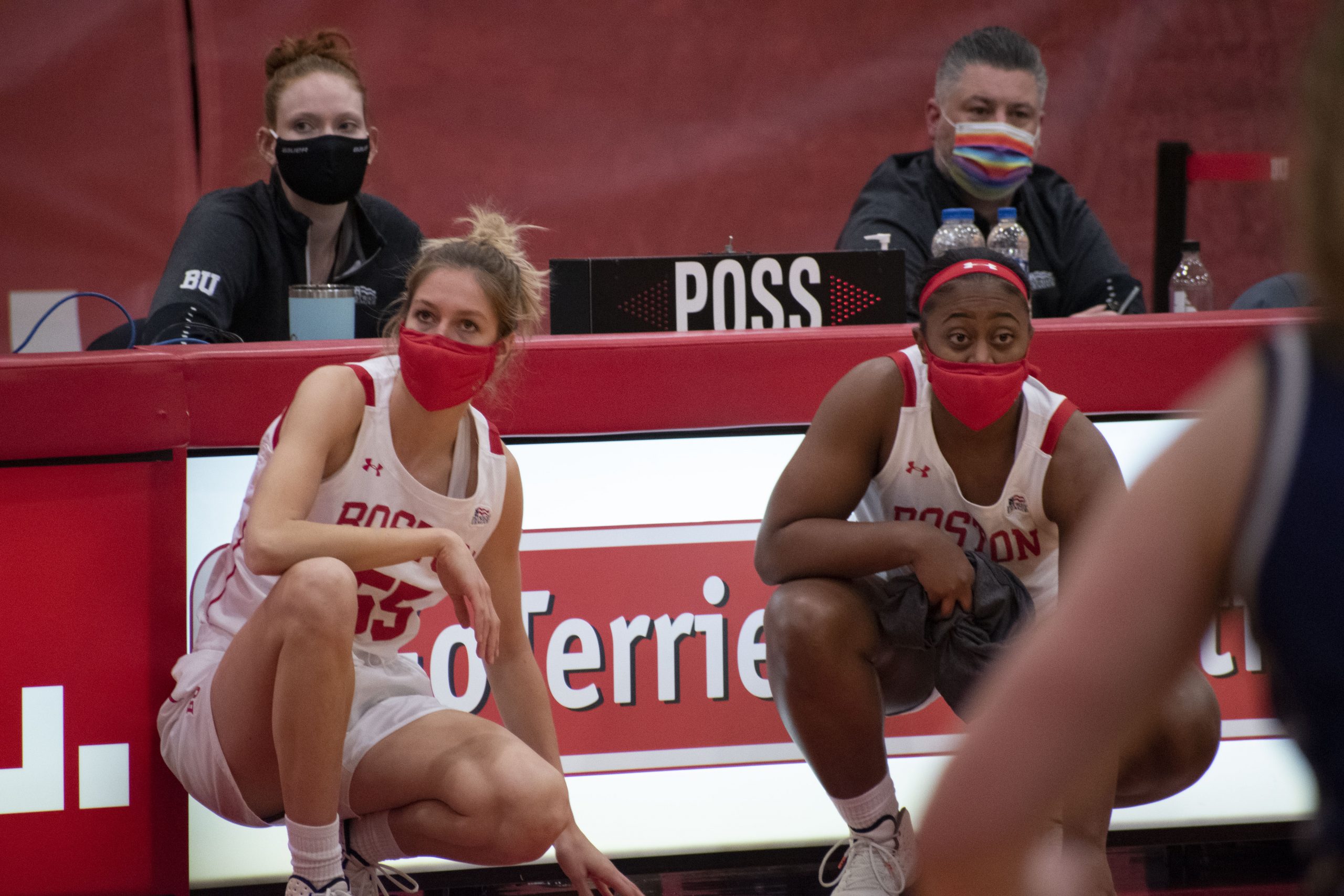 Boston University women’s basketball rostered 14 Terriers in the 2021 season. One player doubled as a shark.

Mackenzie Miers became known for exemplifying “Shark Mentality” during her time at BU. The 6-foot-2 forward is part of a three-person senior class that helped turn around the entire program, culminating in a Patriot League title game appearance this season. Along the way, Miers found intrinsic motivation, self-confidence and the desire to attack every day. Her internal development highlights the power and pressure placed on college athletes.

I talked to Miers to reflect on her college basketball career, her personal evolution, and her next steps.

EF: Was there a moment after the Patriot League championship game or in the next couple of days where it dawned on you that this is it?

MM: I think in the last couple seconds of the game, Tenisha [Pressley] and I looked at each other, and I don’t remember who said it, but one of us said, “It’s really over.” And I was just trying to sit there and embrace those last couple of seconds on the clock because it felt like a blink of an eye. It all just went so fast.

Even if it was just looking around at Case Gym — it was a moment, for sure. I think we both got teary-eyed when we realized how fast it went, because it was really the best four years of my life. I feel like it was such a family atmosphere. So it definitely hit me, as soon as I realized it was gonna be over. Part of my mind is still almost hoping it’s not.

EF: When you think about this journey that you, Tenisha and Katie Nelson have gone on — I mean, you went through a coaching change, COVID, the best season in the last 15 years of the program — what do you think about?

MM: I feel like I think about our freshman year, which was our worst year, but I just remember that the seniors back then were always so “leaderly”. I remember them always saying they just want to leave the program in a better spot. So I guess when I look back at it, I just think about how far we’ve come, and then to also just see Tenisha, Katie and I grow beyond the basketball. Even just changing majors or doing anything, it’s been really awesome to see us all blossom.

EF: What do you think your most proud moment on the court has been?

MM: I think my most proud moment personally was my junior year in the Cal [nonconference] game we played. We lost, but I had a good game, and I just remember thinking: Why am I so afraid? This team is so good; why can’t I just be confident when we play Colgate or whoever? So that was a proud moment, and I guess this year, too, just all the little moments I got to go in and do anything. It felt really good.

But it’s funny because even though most kids might say, “Oh, I remember the games the most,” when I look back, I often think about practice and moments behind the scenes that mean the most to me.

EF: What were some of those moments?

MM: So at the end of practice, we used to always have these end-of-game situations. Coach [Moseley] would split up the team… and she’ll pull one group aside and the other group will just wait there. One group comes up with a defensive plan on their own. And she gives [the other side] a play to try that we don’t have. It gets really competitive and really fun.

I was on a team with the two freshmen, Liz [Shean] and maybe Sydney [Johnson]. [The offense] came up with this play that was for a last-second shot, and there were 3.7 seconds left and they were down by three. So it was going to either Maggie [Pina] or Katie. In that moment, we’re all so competitive, and it’s just funny.

So I remember flying out at Maggie, and I don’t think I’ve ever jumped as high, but I blocked her shot and everyone just went crazy. Usually the offensive team gets it or it just works… that always sticks out to me as such a fun moment when I look back and remember it.

EF: How much do you think basketball, either before college or including college, impacted your confidence?

MM: Definitely in college, it’s boosted my self-confidence so much because even when I come home, people are like, wow, you went DI. It’s not like they even watch, but it’s just that prestige — you feel accomplished, like I did something.

And also… I’m obviously very tall, so in high school most of the girls were normal-sized; it’s not like they were super tall like here at BU. So being around other girls that were like me made me feel super confident. I was like, oh, they’re confident, why shouldn’t I be confident? It also really helped me with school and interviews; I realized just how much being a part of athletics can help with everything. It definitely helped me a lot.

I think I always struggled on the court with confidence, just because I would always think too much and doubt myself. But I honestly think that by the end of this season I started letting go of that, which felt good.

EF: What was the biggest challenge for you as a college basketball player?

MM: I think that the biggest challenge for a lot of people, and a lot of girls especially, is just being really hard on yourself. I think there’s this — what we think is a standard to be great, because all of use are very accomplished athletes. So when things don’t go your way, I think a lot of people internalize that for the worse.

So I feel like that was something I struggled with — just internalizing that I wasn’t getting playing time because I suck now. You say these things in your head, and for me, that was hard. Positive self-talk and positive reinforcement was really important to me, and someone that actually helped me with that was Vanessa Edgehill [2020 graduate]. She was always so positive and she really showed me… everyone has a role and everyone comes and does something here and there. I was just as part of every win as the stars of the team were.

I think that’s something that was really hard for me to understand at first, because it’s hard to feel like you’re a part of something when you’re not physically in it. It’s something I’ve learned — no, you are part of it. You’re part of the practices; you’re part of making those people better. Your time does come eventually.

EF: What was the most challenging part about this season specifically with COVID?

MM: We were just anxious all the time about someone getting COVID-19 or something happening with the league or the team we were playing. So many games got cancelled abruptly, and we had to go through quarantine earlier in the season. It was just that constant fear that all the work was for nothing and we weren’t going to be able to finish how we wanted to… I think that was the biggest fear and pressure from this past year — just the COVID anxiety. Every time we had a headache, we were freaking out.

EF: I feel those concerns as a student, and it’s just relegated to myself or my roommates. What was that pressure like when it’s a whole team at stake?

MM: It was a ton of pressure. And it was just crappy because if we go play a team there and we’re not wearing masks and someone gets COVID during the weekend, that affects us too… It was just this constant anxiety that was just hanging over all of us. I’m still going to have that anxiety, but I least I know it’s not going to wipe out my whole team [now].

EF: How much do you envision Shark Mentality sticking with you after basketball?

MM: I definitely think it will stick with me for my whole life. Even now, I’m trying to keep that same mindset — just going after everything I want and working really hard for it, whether it’s interviews or schoolwork. I don’t want to lose that competitive edge and edge to be great and do great things with whatever I do.

EF: What’s next for you?

MM: I feel like I’ve had so many different plans. I thought about going overseas for a bit and playing, which would have been really cool, but it’s hard because I feel like I’ve created such a family at BU. I also think I just wanted to end my chapter of basketball with Boston U. I got into grad school at BU, which is exciting, but now I’m actually going through different interview processes for different jobs next year. I’m trying to keep my options open…  but I think that I probably will be in the Boston area no matter what, which is nice.

EF: You’ve talked about the excitement and joy, but also the pressure and stress of playing basketball. Do you feel a sense of peace now or is it still, go-go-go?

I think in some ways I feel super content with how it all ended. Obviously we wanted to go to Texas, but I feel good about where our class left the program, and I’m really proud of all the girls above and below me, and my class. In that way, I’m content and peaceful. But I think there’s a part of me that will always be a little restless — and I don’t think that’s a bad thing.

This interview has been edited and condensed.