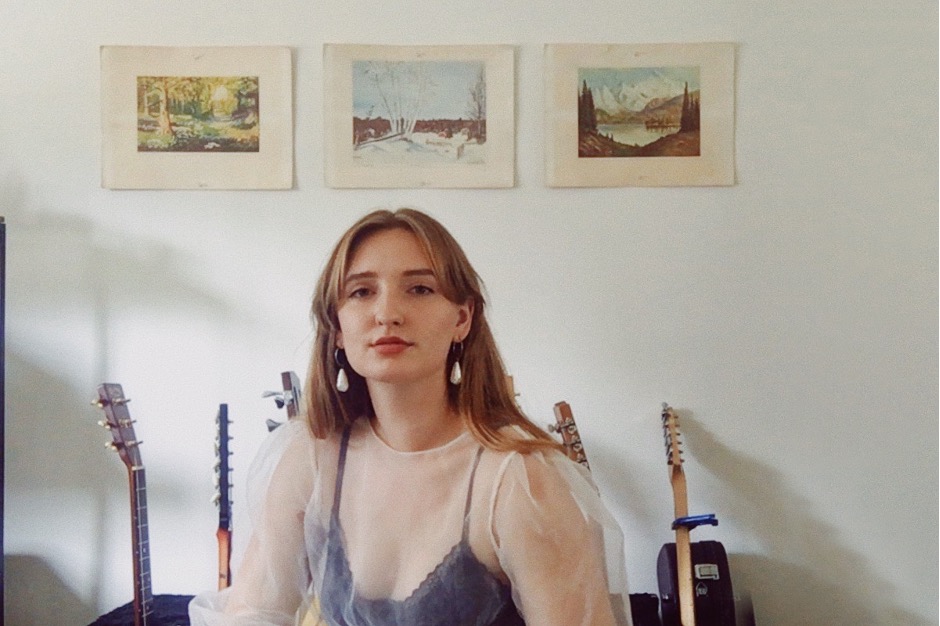 “We were always gonna have to face loss at some point, so we shouldn’t let it surprise us now,” Madison says.  She looks away from the camera to tune her guitar.

“It still does though,” she says, “it surprises me.”

The lighting turns dark and blue, and Madison plays “Broken Harvest.”  She had written the song with a prompt from NPR: “dreams deferred.”  She plays a Silvertone acoustic guitar with a single pickup over the sound hole.  Capo at the 4th fret, no pick.

“All things fade away,” She repeats in the song’s coda.

Streaming on Mandolin.com, the evening was billed as “Livestream of Consciousness.”  Throughout the show, Madison sat in front of one of three backdrops.  The first was an archway filled with simply-colored stained glass, the second was a pale but psychedelic tapestry, and the third was a white fireplace with candles surrounding Madison.

Madison began with “When Love Loves Alone,” then played her classic “Pin It Down,” and then the new “All I’ve Ever Known” before she reached “Broken Harvest.”  Her guitar had a rubber bridge which muted the notes and gave a harsh flavor to her strumming.  Additionally, she played through a Whammy pedal which doubled every note that she played.  It was an odd sound, but it worked well for an artist who once said a note and a note a half step below sounded like a resolve.

“Well we’re all having a good cry together,” someone named Mermama typed in the chat during “Life According To Rachel.”  Madison said she wrote the song after her grandmother passed away last August.

For “No One Else To Blame,” Madison switched to a beautiful Taylor acoustic guitar (I counted four guitars throughout the evening), this time with no rubber bridge so her finger-picked notes could ring out.  “Check out the time signature on this one,” a viewer named Don Sheldon typed in the chat.  Sure enough, there was a repeating section of the song that operated on seven beat measures.

Madison played 13 songs during her set, all without any backing musicians unlike her recorded material.  She played and sang well, and at times her Joni Mitchell-esque high notes outran my computer’s speakers.  When I compare Madison to Joni Mitchell, I mean it like how I compare Emily Remler to Wes Montgomery.  It is a complement derived from their mastery.

It is monumentally difficult to make a virtual show feel like the real thing.  The audience cannot connect with the artist, and the artist cannot connect with the audience.  That’s why so many of these COVID shows from theatres and concert halls have agonizing moments of silence after each song.  A space like that demands energy, so I was happy to see that Madison’s show was in such an enclosed, intimate space.

Though she played well, at times Madison fell into the acoustic singer/songwriter trap where every song starts to blend together from the limited sonic possibilities.  To her credit, Madison played enough strange chords and tunings to keep me interested, and they were only for the purpose of sounding more like herself.  I once heard that she likes to sit in a park and watch planes go by; surely some strange chords came from that.

I stuck around for the VIP Q&A, “Song in my Headphones,” which was advertised before and during the show.  Unfortunately, since I signed up during the show, I (and seemingly several dozen other audience members) never got a chance to submit any questions in advance and had to rely on the chat, which moved much faster than anyone could reasonably handle.  Madison always came one or two questions away from mine, but I guess asking why she didn’t use a pick was too niche for non-guitar players.

Virtual shows are hard to do well, but Madison’s was a good example of how they can do more than just emulate a club gig.

Check out a snippet of the performance: