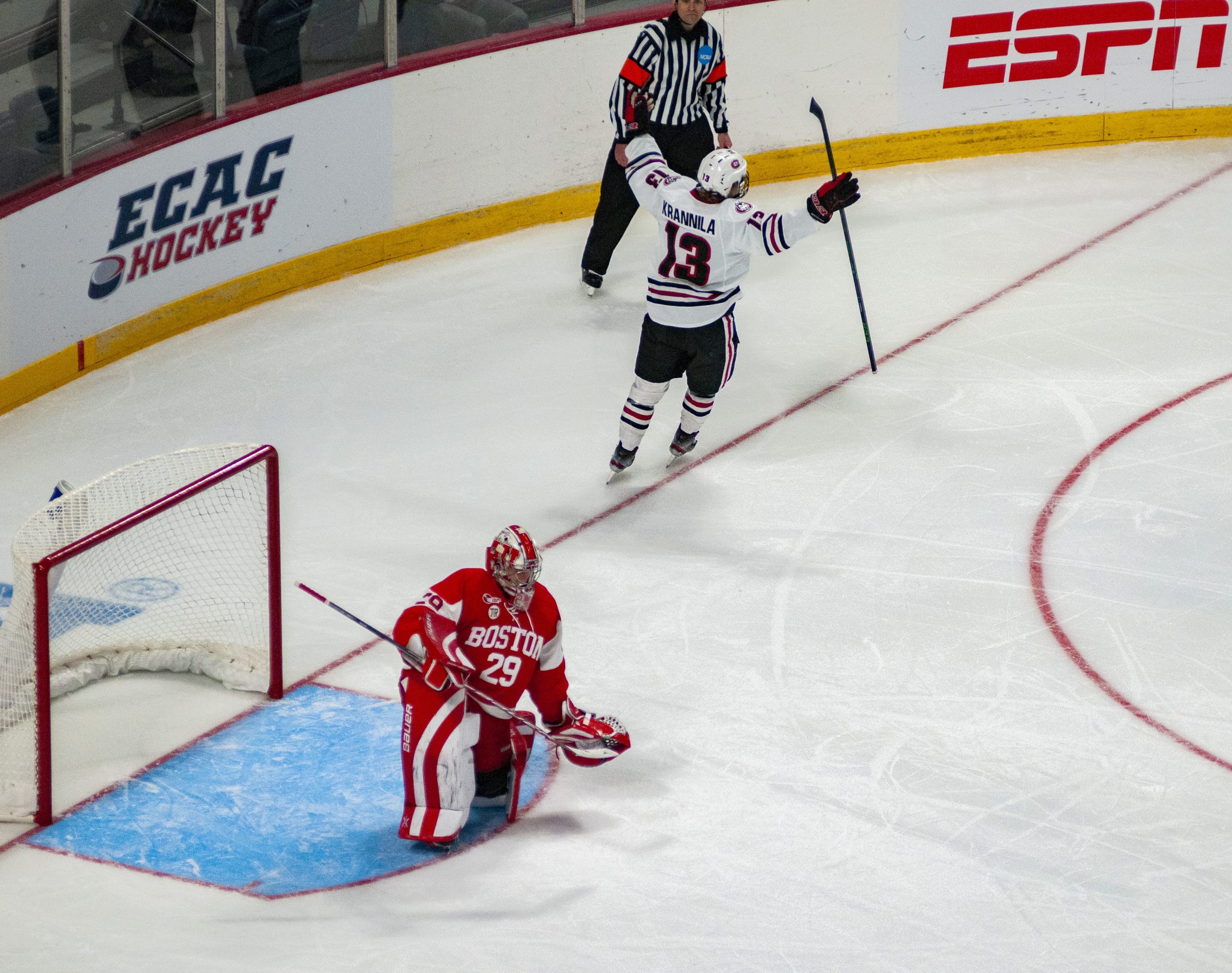 Freshman goaltender Drew Commesso made 32 saves for BU in the loss, while St. Cloud senior David Hrenak (34 saves) picked up his first career NCAA tournament win. Senior forward Easton Brodzinski led the way for the Huskies with two goals on the afternoon, including the eventual game-winner late in the second period.

For BU, sophomore forward Wilmer Skoog scored eight seconds into the second period before junior forward Jake Wise scored his first of the year in the back half of the middle frame to tie it at 2-2. Then, SCSU put up four unanswered goals to close the game.

Here are my three takeaways from the loss – all opinions are my own:

After BU took a 1-0 lead, St. Cloud responded. The Huskies scored twice in short order as they caught a little bit of luck. SCSU also responded almost immediately after Wise evened things up. From there the game got out of hand on the scoreboard, especially after Jami Krannila’s penalty shot goal. Whether or not you agree with the penalty shot call, or are a fan of the bounces the Huskies got, there was simply no response from BU in the third period.

Life was far too easy for St. Cloud, especially on the breakout and their zone entries. The energy BU brought in the first period, overall, and the start of the second period simply was not there. Sure, SCSU got some crazy puck luck, but the onus is on the Terriers to play to their strengths, do what makes them successful and do the little things right. When you do that, you create your own luck and respond to adversity.

Don’t be a hero

Down a pair of goals in the third period, BU lacked cohesiveness, especially on offense. It seemed as if the Terriers were playing as a bunch of individuals, rather than a collective team. Don’t get me wrong, the dazzling individual skillsets and games of many of BU’s players is incredibly exciting to watch. But as mentioned, when you’re trying to claw back into a playoff game, and fighting for your season, you’ve got to revert back to what makes you successful and simplify your game.

St. Cloud gave BU absolutely nothing in terms of offensive zone entries, and the Terriers tried to force plays that were not there to gain the blueline with possession. If it’s not there, dump the puck in, establish the forecheck and make life miserable for SCSU. Force them to make a mistake. As it often does, it comes down to the little details.

I should applaud St. Cloud, though, they played a strong game, and stifled BU. Credit where credit is due.

I had called out St. Cloud and goaltender David Hrenak on the BU Hockey Show, on Twitter and amongst friends, but, man, they proved me wrong. Not only did St. Cloud absolutely take it to BU, they did the same thing the following night against Boston College. The Huskies play a very likable style – fast, skilled, heavy and responsible, all at the same time. SCSU exorcised its demons in the national tournament, and I’ll be rooting for them in the Frozen Four. They’re a fun team to watch.

Click here for more details on those stories, and stay tuned to WTBU Sports for takeaways from the season and more offseason coverage.