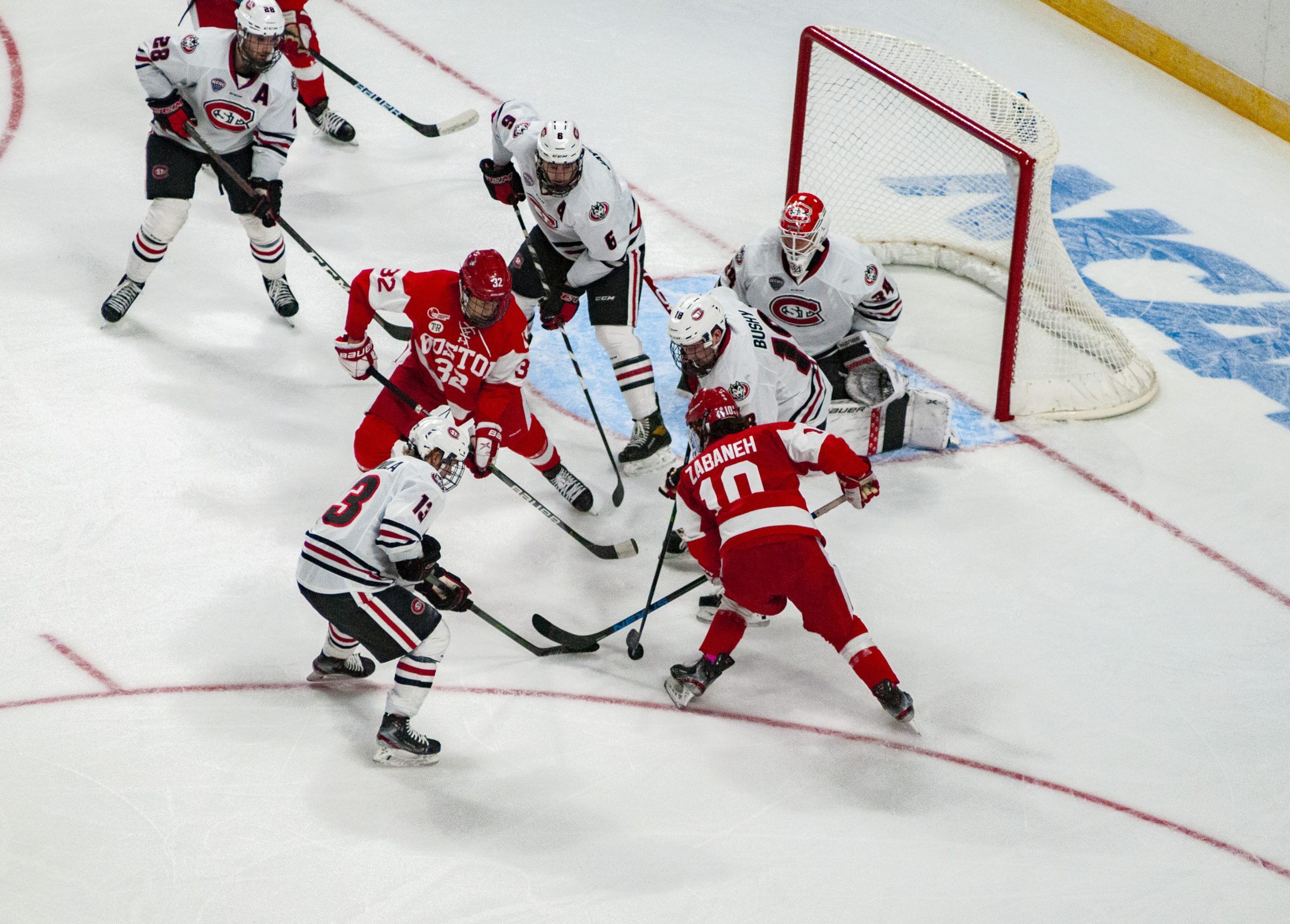 St. Cloud head coach Brett Larson said he was proud of his team.

“It took everything we had to be able to get the win,” Larson said.

Freshman goaltender Drew Commesso made 32 saves for BU in the loss, while St. Cloud senior David Hrenak (34 saves) picked up his first career NCAA tournament win. Senior forward Easton Brodzinski led the way for the Huskies with two goals on the afternoon, including the eventual game-winner late in the second period.

Less than 10 minutes into the game, BU freshman forward Dylan Peterson laid a hit from behind on SCSU senior assistant captain Kevin Ftizgerald. Peterson received a five-minute major penalty and a game misconduct for boarding.

After the first 20 minutes, the two teams were scoreless, but Commesso was as busy as ever, stopping 15 shots.

But just eight ticks into the second period, BU broke through thanks to sophomore forward Wilmer Skoog. Senior captain Logan Cockerill broke up the SCSU breakout, and Skoog was right there to chip the puck over Hrenak for his fourth of the season.

Here's Wilmer Skoog's goal to give BU a 1-0 lead. Cockerill disrupts the St. Cloud breakout and Skoog chips the backhand over Hrenak. Goal stands after a lengthy review. #BUvsSCSU pic.twitter.com/XctXeJ2Wzp

However, St. Cloud tied things up just over 12 minutes later. In what was truly a magical pass, Huskies junior forward Nolan Walker flipped the puck over the net as he fell to the ice. The puck landed square on junior forward Micah Miller’s stick and he shot it into the goal for his second of the season as the Terriers had no idea where the puck was.

“That was one of the strangest goals I’ve ever seen,” Larson said.

O’Connell said Miller’s goal was “one for the ages.”

“The puck shoots over the net, and no one knows where it is aside from the guy in centerfield,” he said.

ST. CLOUD GOAL: Micah Miller evens it up for the Huskies. BU gets hemmed in the zone, Easton Brodzinski flipped the puck out to the slot, and Miller puts it home. 1-1 with 7:45 left in the second. #BUvsSCSU pic.twitter.com/mE1zwFL2wh

The Huskies quickly doubled their lead 1:15 later. SCSU junior defenseman Nick Perbix uncorked a slap shot from the half-wall that deflected off Cockerill and sophomore blueliner Alex Vlasic before winding up in the back of the net.

Larson commended his group’s ability to bounce back after Skoog’s early goal.

“They handled some adversity,” he said. “They didn’t let it rattle them. They were able to rally from there.”

Just under two minutes after Perbix’s seventh of the year, BU pulled back to even. While on a tour of the offensive zone during a power play, junior forward Jake Wise used the time and space he was given before finding a shooting lane and roofing a wrist shot over Hrenak’s shoulder. The goal marked Wise’s first of the season.

From there, St. Cloud took control.

32 seconds after Wise’s tally, Brodzinski got on the board. Walker found Brodzinski, who was all alone in the slot, and the senior one-timed a shot over Commesso’s glove to make it 3-2 with his 12th of the season.

ST. CLOUD GOAL: Easton Brodzinski is untouched in the slot and gives the Huskies a 3-2 lead moments after BU tied it up. #BUvsSCSU pic.twitter.com/tgAygFO6bW

While the Terriers were on the power play, Huskies sophomore forward Jami Krannila got free for a partial break, which was disrupted by Cockerill. The officials ruled Cockerill tripped Krannila, and awarded St. Cloud a penalty shot. Krannila beat Commesso high for his 11th of the season, marking the likely back-breaker for BU, who failed to capitalize on the major power play.

Krannila said he had to convince Larson to take the penalty shot instead of deferring for a power play.

“He was really close to calling it off,” he said. “I was lucky he didn’t.”

O’Connell said the penalty shot was likely the turning point in the game.

“That was a big momentum swing.”

Brodzinski and freshman forward Veeti Miettinen added a goal each before the end of regulation to give the Huskies some insurance.

ST. CLOUD GOAL: Easton Brodzinski gets to the rebound before Commesso can. Play is under review for goalie interference it looks like. 5-2, Huskies. #BUvsSCSU pic.twitter.com/Ux3o3HUl5x

O’Connell thought the Terriers caught a couple bad breaks, but Brodzinski said the Huskies took advantage of their luck.

“We got a few lucky bounces here and there, and came out on top,” Brodzinski said.

The BU bench boss took time to reflect on how the Terriers worked through adversity during this season as a whole.

“Our guys fought hard until the very end of it.”

“We had a resilient group,” he said. “It sucks to go out this way. I thought we had a really great group.”

The loss marks the end of the Terriers’ season. Cockerill said it was senior assistant captain David Farrance’s last game. BU also has two additional seniors in forward Jake Witkowski and defenseman Joseph Campolieto. Although everyone gets an extra year of eligibility because of the pandemic, Cockerill reflected on what could be the end of his time on Comm. Ave.

The Huskies will advance and face Boston College in the regional final on Sunday at 5:30 p.m. The winner of that game earns a bid to the Frozen Four in Pittsburgh.

Featured Image: Freshman forward Nick Zabaneh (10) and sophomore forward Wilmer Skoog (32) battle for the puck in a game against St. Cloud State at the TUC Center in Albany, N.Y., on March 27, 2021. Photo by Patrick Donnelly.