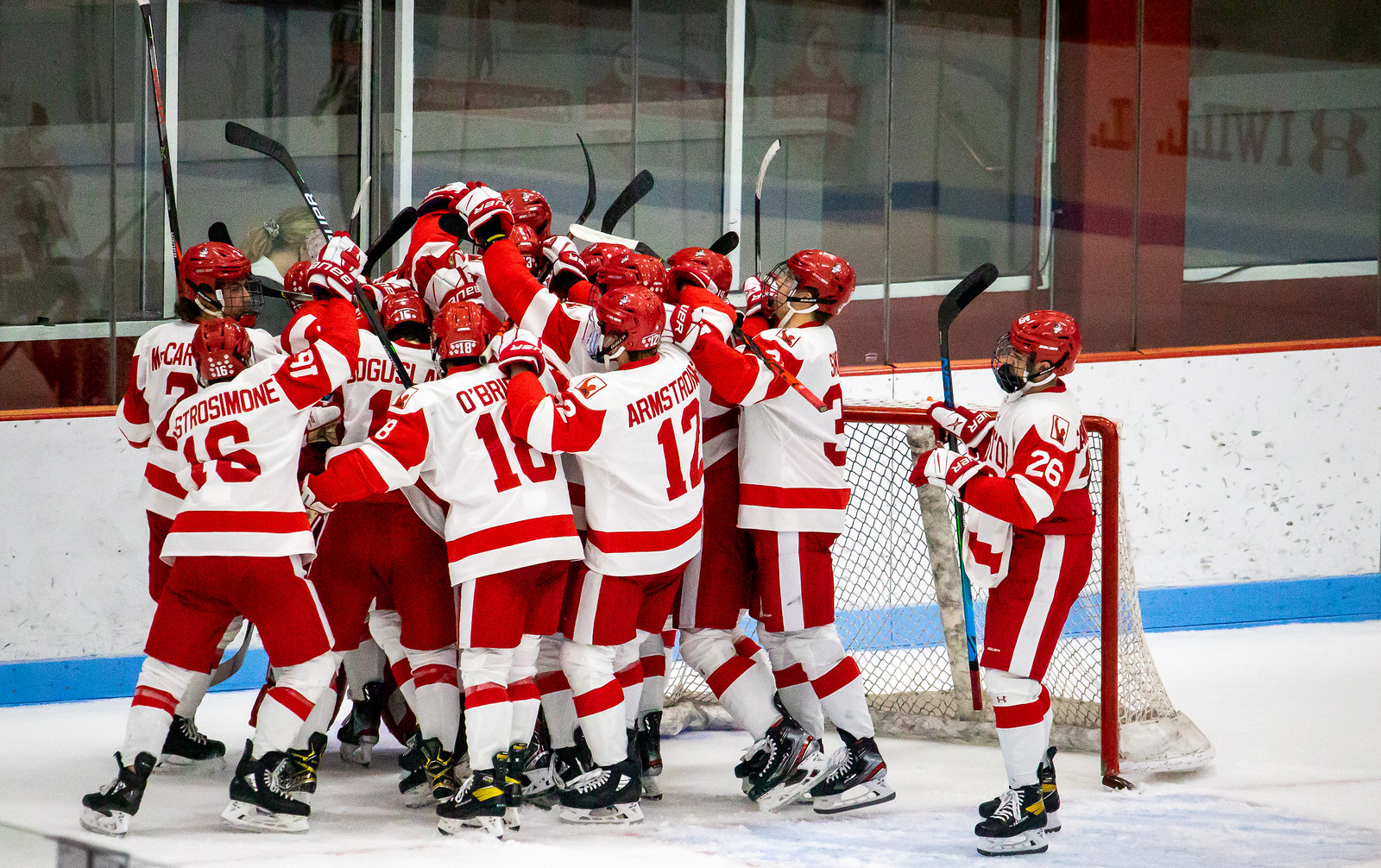 Boston University and St. Cloud State University will square off in the NCAA’s Northeast Regional semifinals at the Times Union Center in Albany, N.Y., tomorrow at 1 p.m. The winner earns the right to play Boston College for a bid to the Frozen Four.

Check out the full preview for the matchup here. Now, time for this week’s notebook:

Getting to know the Huskies

BU and St. Cloud have met just once all-time, during the NCAA regional semifinals in 2000. BU won that game 5-3 and, ironically, that game was also in Albany. BU head coach Albie O’Connell missed the Huskies by a year as a player and has never seen them as a coach, either.

“We’re gonna have to watch some video, and just get a little bit more familiar [with them],” he said on Sunday.

I spoke with Drew Steele of KVSC Sports at St. Cloud State, and he gave me some things to keep an eye on for BU, especially in terms of matchups.

“After every TV timeout, they’ll roll the first lines of offense and defense out there,” he said. Here’s what SCSU has been running for lines and power play units lately:

“Two key guys that are crucial to how far the team goes is Will Hammer and Micah Mille,” Steele added. “Neither of them have good stats, but are the biggest reason why the PK is so good [84.85% – 11th in the nation]. Also, faceoffs are a big area to watch for this team. When they win draws, they win games, but have struggled down the stretch.”

On the season, SCSU has been average at the dot, winning 51.2 percent of faceoffs. However, BU has won just 43.4 percent of their draws.

Comparatively on special teams, BU is working at an 83.61 percent clip. On the man advantage, the Terriers have a 15 percent success rate on the power play, while the Huskies have scored on 22.5 percent of their opportunities.

“It’s about blazing their own path.”

St. Cloud State’s senior class has been to the tournament twice already, as freshmen and sophomores, but this time just feels different, according to Larson.

“I don’t know if it’s COVID or if it’s the fact that there was no tournament last year, but it almost just feels like a different world with this group,” he said. “Yes, the older guys have been there, but it’s about this group, these guys.

“It’s about blazing in their own path.”

“I think we’re all very hungry in the locker room,” he said. “A lot of us have experienced going into this tournament, and I think we know how we need to play.”

Fans will be in the building

The Times Union Center will be allowing spectators at 10 percent capacity, equaling approximately 1,423 fans in attendance, if sold out. The game will mark BU’s first time playing in front of fans this season. O’Connell is excited about the suddenly-strange concept.

“It’ll be great to get a little bit more noise in the building, rather than the noise that the guys on the bench make after a goal, hit, play or whatever the case, a save,” he said. “Even if it were 10 fans it would be more exciting than none. So, as many as we can have would be amazing, especially our supporters, as many as we could get there would be really great for our team.”

The Huskies have played a handful of games in front of family and friends, and skated in front of a crowd of nearly 4,000 in the NCHC Championship at North Dakota. St. Cloud head coach Brett Larson said it was “really fun” to have the atmosphere back.

“I can tell the guys loved it,” Larson said. “It certainly gave both teams a little extra juice, even though it was basically a home game for North Dakota. It was great for them to get that experience.”

BU senior assistant captain and defenseman David Farrance said his family now has the opportunity to see him play in-person for the first time this season.

Just three Terriers – senior captain and forward Logan Cockerill, senior assistant captain and defenseman David Farrance and redshirt junior forward Ty Amonte, who is out for the year once again – have played in the national tournament before, when BU upset Cornell, 3-1, before falling to Michigan, 6-3, in the 2018 regional finals in Worcester. Senior forward Jake Witkowski was on the roster, but did not play.

Farrance scored the game-winning goal before Cockerill added an empty-netter in the third period of the semifinal against Cornell.

Cockerill said that although BU is a young team, there are plenty of players who have played in big games before.

“At the end of the day it’s just another hockey game,” he said. “You’re gonna be playing a really good team. The stakes are higher.”

BU’s captain can also draw from past experience at the tournament and guidance from the team’s previous leaders.

“I just remember some of our upperclassmen, like Brandon Hickey, just leading the way and making sure everyone was staying calm throughout the week and even during the game,” he said. “We were the four seed, but we never really felt like underdogs.”

Potential Battle of Comm. Ave. for a bid to the Frozen Four

BU and BC have met just twice in the NCAA tournament since its inception in 1948, but have faced off plenty of times with hardware on the line between the Beanpot and conference tournaments. The two sides split their two NCAA meetings. First, the Terriers and Eagles battled for the national title in 1978 (BU won, 5-3) before meeting again in the national quarterfinals in 2006 (BC won, 5-0).

O’Connell said although the team is focused solely on St. Cloud right now, the chance to square off with BC in the regional finals is certainly exciting.

BU and St. Cloud were originally supposed to get underway at 6:30 p.m. after the BC-Notre Dame contest, but with the cancellation, the Terriers and Huskies will play at 1 p.m. instead.

Larson said he does not think the time change will have much of an effect.

“Fortunately we’ve had a lot of afternoon games this year,” he said. “I think sometimes, when you’ve got a big game like this, it’s nice for both teams just to get up and go play.

“I don’t think either team would have had any problem with change, and I know we certainly don’t.”

O’Connell agreed that the time change is not a big deal.

“I think the guys were excited about the time change, instead of waiting around all day,” O’Connell said.