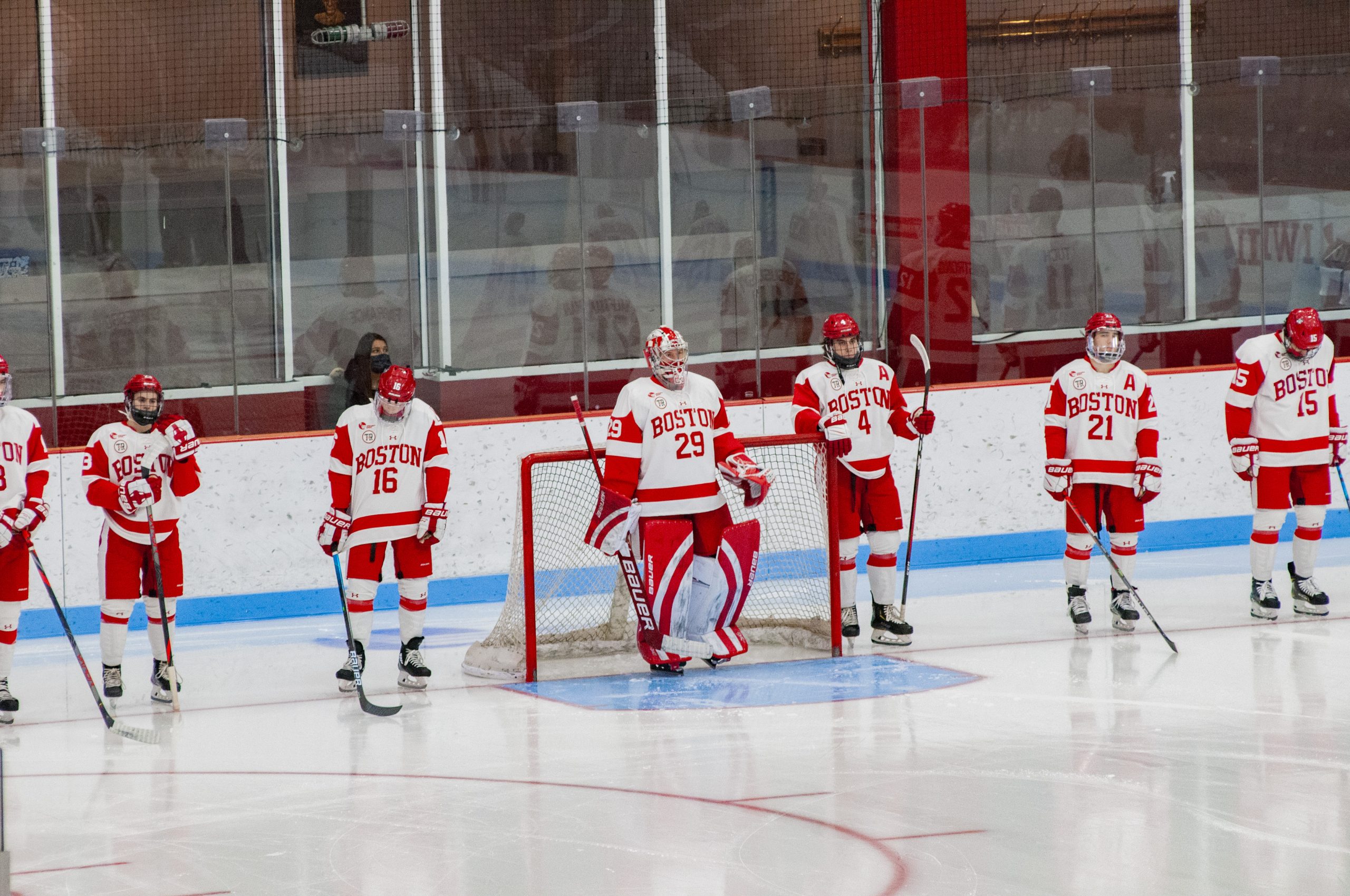 For the 37th time in program history, Boston University is headed to the NCAA tournament.

BU senior forward and captain Logan Cockerill says the team is excited to get going on the national stage.

“We’re really excited to be selected to the tournament,” O’Connell said. “It’s been kind of a crazy year for us. I think we’ve had a pretty good showing through the year.

“We feel like our best hockey is still ahead of us.”

SCSU head coach Brett Larson said his team feels thankful to be playing and have a chance at a national title.

“More than anything, we’re excited to be here and excited to get playing Saturday,” Larson said.

St. Cloud is coming off a loss to top-seeded North Dakota in the NCHC championship game last week. The Huskies are 3-2 over their last five contests. In its history, SCSU has made the tournament now 15 times, making  it to the Frozen Four just once (2013). During the last decade, the Huskies had made it to the the NCAA regionals seven times, including four years in a row from 2013 to 2016.

Meanwhile, BU has not played since losing to UMass Lowell in the Hockey East quarterfinals on March 14. In their last five games, the Terriers are 2-2-1, including a shootout win over Lowell that technically went down as a draw. It has been two seasons since the BU last appeared in the national tournament after qualifying for four straight years from 2015 to 2018. The Terriers have five national titles and 22 Frozen Four appearances to their name.

After losing out on an automatic bid to the tournament, the Terriers had to wait for selection this past Sunday, but it does not seem like they were too worried about their situation.

“We had a pretty good idea that we were going to be in, based off looking at other teams, our record and what we put together this year,” Cockerill said.

O’Connell said the team tried to stay positive throughout the process, letting their performance speak for itself.

“We came in second place in our league, and historically, second place in Hockey East has put you pretty close to [the tournament], if not in,” he said. The third-year coach also noted how the time off has benefitted his players, especially those who may have been banged up at the end of the season.

“We were leaking oil, physically and a little bit mentally towards the end [of the regular season],” he added.

For the Huskies, freshman forward Veeti Miettinen has set the pace offensively with 10 goals and 13 assists for 23 points in 27 games this season. Behind him, sophomore forward Jami Krannila has 20 points (10g, 10a) in 27 contests. Junior defenseman Nick Perbix (27 games) and sophomore forward Zach Okabe (26 games) each have 6-13-19 numbers on the year.

This marks Hrenak’s third appearance in the national tournament. In 2018-19, top-seeded SCSU was upset by AIC, 2-1, in the first round. Then a sophomore, Hrenak allowed two goals on 13 shots in the loss. The Huskies were also the top seed in 2017-18, but were upset by Air Force, 4-1, in the first round as well. In that game, a freshman Hrenak allowed two goals on 24 shots with the other two goals going into the empty net.

For BU, sophomore forward Jay O’Brien leads the team in goals with eight in 15 contests, and is tied for the team lead in scoring (16 points) with senior assistant captain, defenseman and Hobey Baker nominee David Farrance (5g, 11a in 10 games). Freshman forward Luke Tuch has 6-4-10 numbers in 15 games, while Cockerill has totaled nine points (5g, 4a) in 11 contests.

“[Farrance] has been really impressive,” Larson said. “I would say he’s one of the top D I’ve seen this year for sure.”

Between the pipes, freshman goaltender Drew Commesso has skated to a 6-1-1 record, a .923 save percentage and a 2.75 GAA in nine appearances on the year. Commesso led the conference in saves per game (31.89) and earned recognition as a finalist for Hockey East Rookie of the Year.

Puck drop between the Terriers and Huskies is set for 1 p.m. on Saturday afternoon. The winner will face Boston College for a bid to the Frozen Four. BC automatically advanced to the regional final after Notre Dame had to drop out of the tournament due to positive COVID tests.

Featured Image: The Terriers stand as the starting lineups are announced before a win against Maine at Walter Brown Arena on Jan. 23, 2021. Photo by Patrick Donnelly