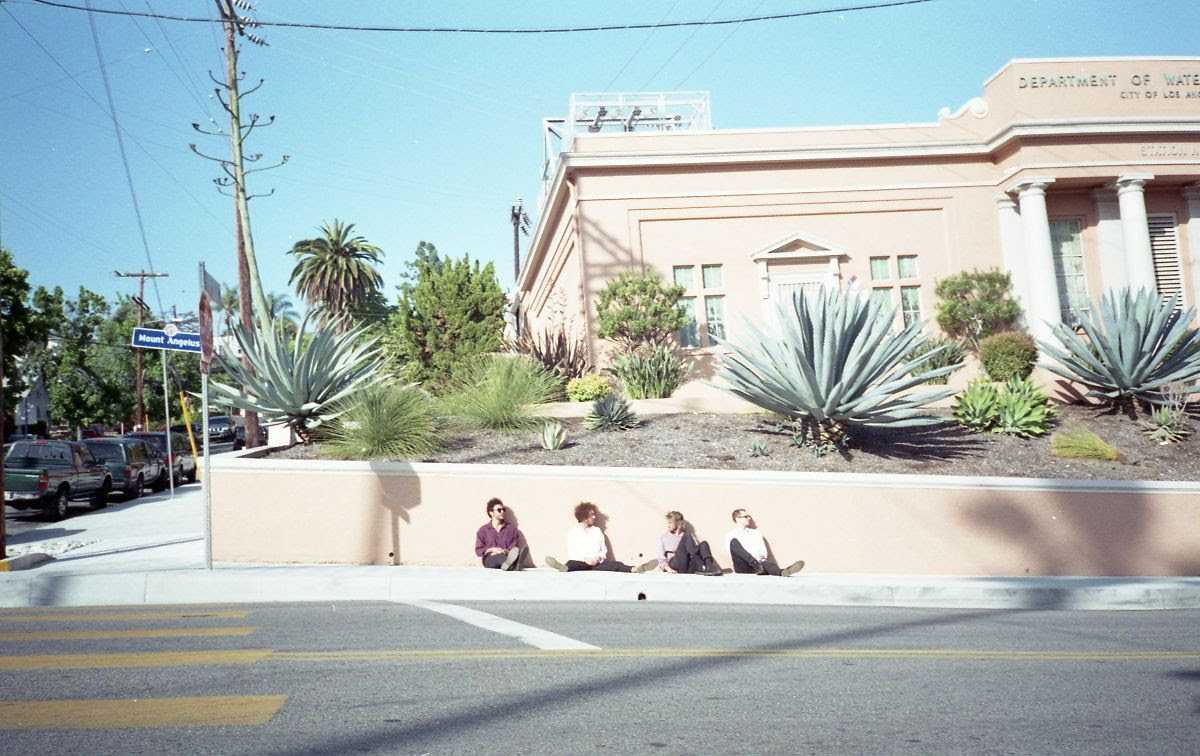 I recently had the opportunity to catch up briefly with SWIMM, an L.A.-based psych-pop band. They’re all about creating music that makes you feel—COVID hasn’t stopped them—while working with Sunset Mesa, the new L.A. subsidiary of Australia’s Sweat it Out Records. Here’s a bit about them.

Let’s talk about origins first. How did you guys all get together?

Adam Winn: Chris and I started making music about 10 years ago, under a different name, and we did that for probably three years. We started making music that needed more than a two piece. We started playing with four people live—but they were a ton of different people over the years. I would say about four years ago, Hany joined before Marto, and then we all got along so well that we realized we were all in it together.

And where did SWIMM come from — has the meaning of the name changed over time?

Adam: In the beginnings, we wanted to come up with a name that represented the music we were making. Kind of psychedelic, floaty, vibey music. I think it still holds true, that there are elements of that in all the music we make.

Marto Bisists: Mine was fine, to be honest.

Chris Hess: I don’t know if I could do better than enlightening—not always a positive one, but nevertheless enlightenment.

Adam: Similar, I feel like I learned a decent amount about my family.

What are you guys inspired by?

Chris: I feel like I tend to get inspired by things across the board. A lot of the time it’s music, movies, or writing. When I can sense that someone is searching for a new angle, or a new take on a very used idea, that’s what gets me fired up. Any time I can tell one someone is coming in from a slightly original angle or perspective.

Hany: I think that sums it up pretty well.

Adam: For me, I’ve been most inspired by my friends. We’re lucky to have a bunch of friends doing rad stuff we’re inspired by, whether it’s music or photography. When I’m losing interest, I can check in with friends and see what they’re up to.

Could you talk a little bit about the songwriting process?

Chris: It tends to be different depending on the song, which is why it’s exciting with us. Every song tends to come from a slightly different place. One category is where we’ll be in a room together playing and save a voice memo on a phone and check back in on it. Sometimes, it will come in from one of the fellows presenting a groove or guitar line that can spark an idea and we’ll elaborate on it there. Sometimes I will write something and bring it to a pretty close to finished state if I’m in the flow with it, and bring it to the guys so we can all add the decorations. It kind of depends on the song.

And for your “You Never Fake It” music video that just premiered too! What’s it like to create visuals for your work? Does it come naturally or is it more of a challenge?

Chris: We had an amazing director, Alicia Sadler. She took the song and storyboarded it out. We had the talents of Dagny and Lauren Ruth Ward. We really let Alicia run with it and take it. We did our best to not flub it up and not be too awkward on camera! It’s always nice to have a director take it from what they’ve envisioned and take it to the end, and be diligent with their vision. We’re really excited she was able to do that for herself, too.

What’s next for the band?

Adam: We’re planning on having a livestream in [April]. We also have two new remixes coming out for You Never Fake It. Our next single will be out, hopefully at the end of March. We’re waiting on confirmation for that one. Lots of new music coming out, and hopefully getting back on stage soon.

Check out the music video for “You Never Fake It” featuring Lauren Ruth Ward here: