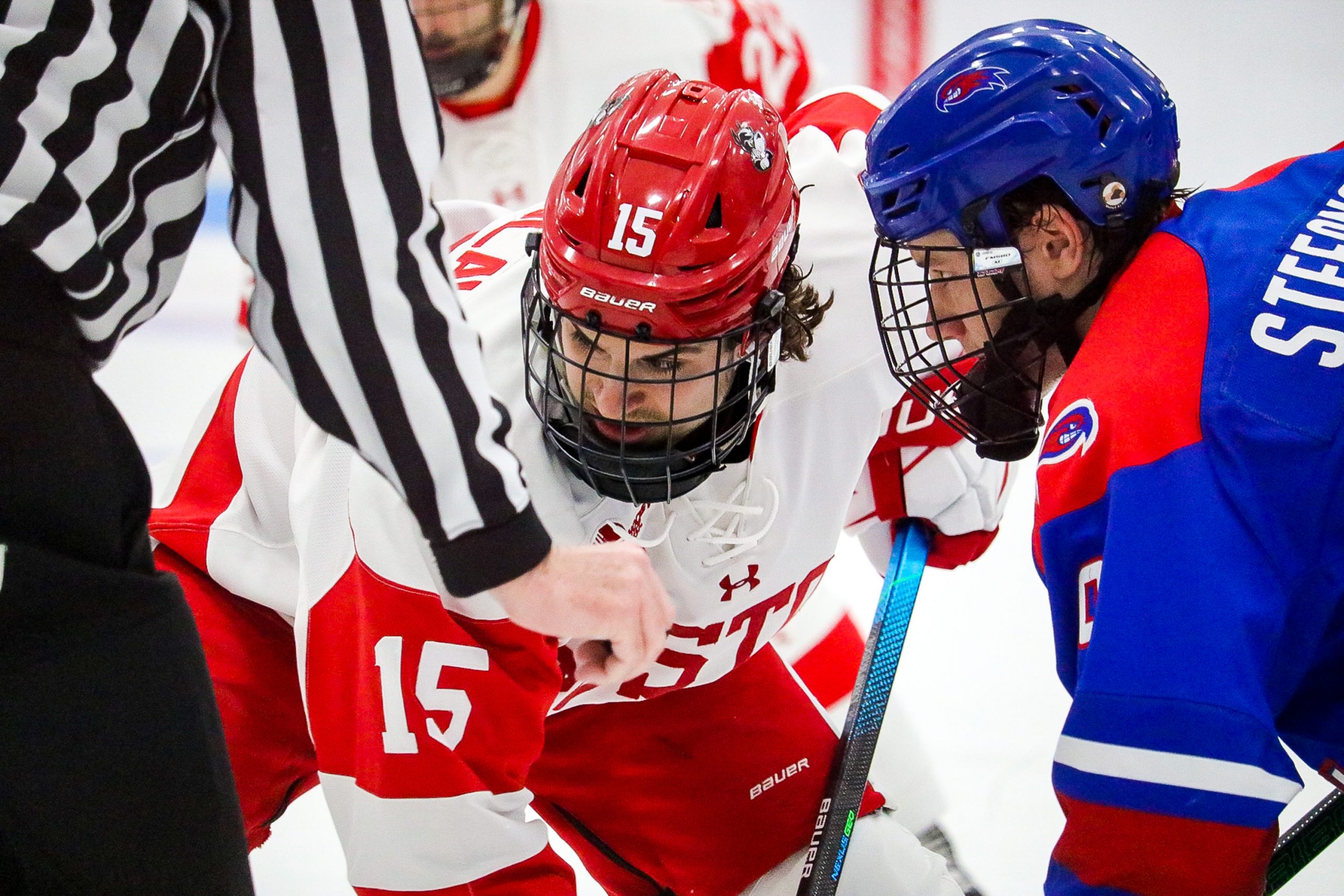 For the third straight year, the second-seeded Boston University men’s hockey team (10-4-1) matched up against seventh place UMass Lowell (9-8-1) in the Hockey East quarterfinal round.

The Terriers won a best-of-three quarterfinal at Lowell in 2019 and were set for a rematch in last year’s quarterfinals before the tournament was canceled due to the coronavirus. Instead, the rematch happened Sunday afternoon at Walter Brown Arena, where the Riverhawks upset the Terriers by a score of 2-1.

While the Hockey East tournament is single-elimination, there is still a chance for the Terriers to be selected for the 2021 Division I Men’s Hockey tournament. And BU head coach Albie O’Connell said that he hopes that will be the case for his team going forward.

“It’s our 15th game this year, and it’s the playoffs,” said O’Connell. “It’s a pretty weird feeling. I think the locker room is pretty bummed out about the result. Hopefully, we’re still playing hockey. So, tip the cap to Lowell.”

In their past five games, the Terrier have given up the first goal of the game. This time, however, BU was able to get on the board first, 2:17 into the first period.

Freshman forward Dylan Peterson received a cross-ice pass through the neutral zone from linemate, freshman Nick Zabaneh. Peterson carried the puck into the attacking zone then passed the puck to his sophomore teammate Jamie Armstrong. Armstrong redirected the puck past Lowell’s netminder, Henry Welsch to put BU ahead 1-0.

Here’s Jamie Armstrong’s first of the year. Dylan Peterson shields the puck and hits Armstrong with a nice feed. pic.twitter.com/G9CvAl9lAV

Just over two minutes later, the River Hawks tied the game at one goal apiece. Junior defenseman Jon McDonald was able to pick up the puck on a failed clearing attempt by BU along the top of the face-off circle. McDonald’s shot was then re-directed by sophomore forward Matt Brown in the slot and went past BU’s goaltender, freshman Drew Commesso, for the equalizer.

With no score in the second period, the game went to the third and final stanza tied. However, at 8:19 into the third, Lowell took the lead.

A miscommunication by the Terriers in front of Commesso led to a loose puck right in front. Sophomore forward Brian Chambers skated in from the blueline and one-timed a shot past Commesso to put the River Hawks ahead by one.

Bad miscommunication for BU here. No one wants the puck and it squirts out to the middle, where Chambers blasts it home. pic.twitter.com/NGsdLaIdn9

With less than two minutes to go in regulation, O’Connell pulled Commesso for the extra skater, but it proved no use.

The buzzer sounded, signaling the end of the game, and the River Hawks took the ice in celebration.

The win for Lowell propels them into the Hockey East semifinals with a single-elimination meeting with a team to be determined following the rest of Sunday’s results. For the Terriers, it’s now the waiting game.

The NCAA tournament bracket will be announced on Sunday, March 21 at 7 p.m. EST.

And if given the opportunity to move on, O’Connell said that some clean up will need to be made.

“We gifted [Lowell] two goals, and you can’t do that if you want to win a championship,” said O’Connell. “We’re gonna have to clean that up. We said it from day one, if you turn pucks over at your blue line or their blue line, a lot of times that’s how you lose seasons.”