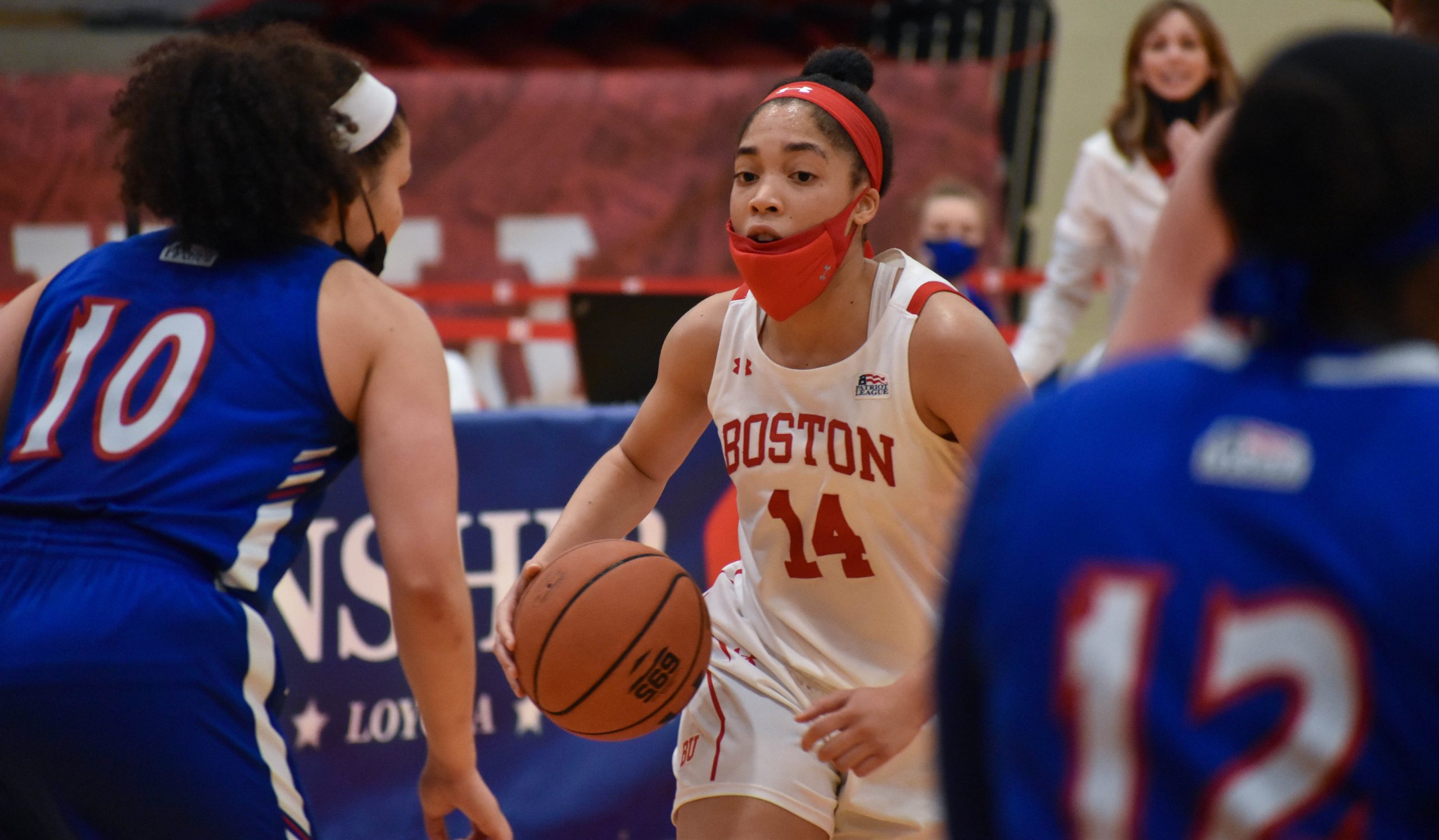 BOSTON, MA — Boston University women’s basketball had waited for a semifinal game since the last time the team played American University. That was 367 days ago, before the 2020 tournament shut down due to the COVID-19 pandemic.

“It was totally worth the wait,” said head coach Marisa Moseley. “So proud of this team and their resilience, and the sheer determination to not just come out and make the semifinals… They understand there’s a bigger goal in mind and they really executed the game plan.”

Sophomore Sydney Johnson was again the story of the game. The explosive guard scored a career-high 23 points, shot 8-of-14 from the field, and made as many three-pointers in the first half (5) as she had in the entire regular season. Johnson is now a blistering 9-for-12 from long range this postseason.

“She has a confidence about her; we saw this when we were recruiting her in high school,” Moseley said. “I think she stopped thinking about making mistakes or anything like that. She’s playing with so much confidence and so much swag right now.”

Johnson’s poise ignited the Terriers after a sluggish first quarter. BU used a 26-9 second frame to blow the contest wide open, and at one point ran off 15 straight points against the Eagles. The team entered halftime with a 42-23 lead and never looked back, leading by as much as 27 points.

The sophomore standout was not the only Terrier with a career night. Redshirt junior Emily Esposito scored a season-high 16 points and made eight of her 12 shots. The transfer wing lit up the mid-range area and took advantage of mismatches with some smooth fadeaway jumpers out of the post. According to Moseley, that was part of the game plan.

“I think Emily is just such a dynamic scorer. She can get her own shot, which is really a huge skill and asset to have,” she said. “So whether she’s playing with her back to the basket or she takes you off the dribble, she creates that space with that fadeaway and it’s really hard to guard.”

BU dominated the smaller Eagles on the glass. Maren Durant racked up 14 rebounds, while Riley Childs added 11, and the team as a whole outrebounded American 39-24. But perhaps their most impressive team effort was defensively against Jade Edwards. The Eagles’ star led the Patriot League in per-game scoring during the regular season, but was neutralized by BU’s zone.

Edwards finished with just 6 points on 2-of-10 shooting to go with eight boards and five turnovers.

“The way we guarded tonight, we really kind of funneled and bottled her up,” Moseley said, “and made her have to take mid-range jump shots if she was going to get shots. She was going to have to work really hard to get her shot off. I think that frustrated her.”

The second-seeded Terriers will stay home for the championship game after a stunning Lehigh upset of Bucknell on the other side of the bracket. One trouble spot they’ll have to address are slow starts; BU has looked sluggish out of the gate all season and have dug themselves early holes in both playoff games.

Sunday’s matchup, scheduled for 4:00 p.m., only adds to the coincidence of this season. BU and Lehigh were supposed to play on March 12 of last year, when the league cancelled the remainder of the playoffs.

Now the two teams will get their showdown on an even bigger precipice in the Patriot League championship. The pressure is on BU to earn its second NCAA Tournament appearance ever. Moseley embraces that pressure.

“For me, I don’t feel that pressure,” she said. “I think I actually kind of lean in to it. I’m excited about it. I think it’s an opportunity — nothing for us to back down from.”