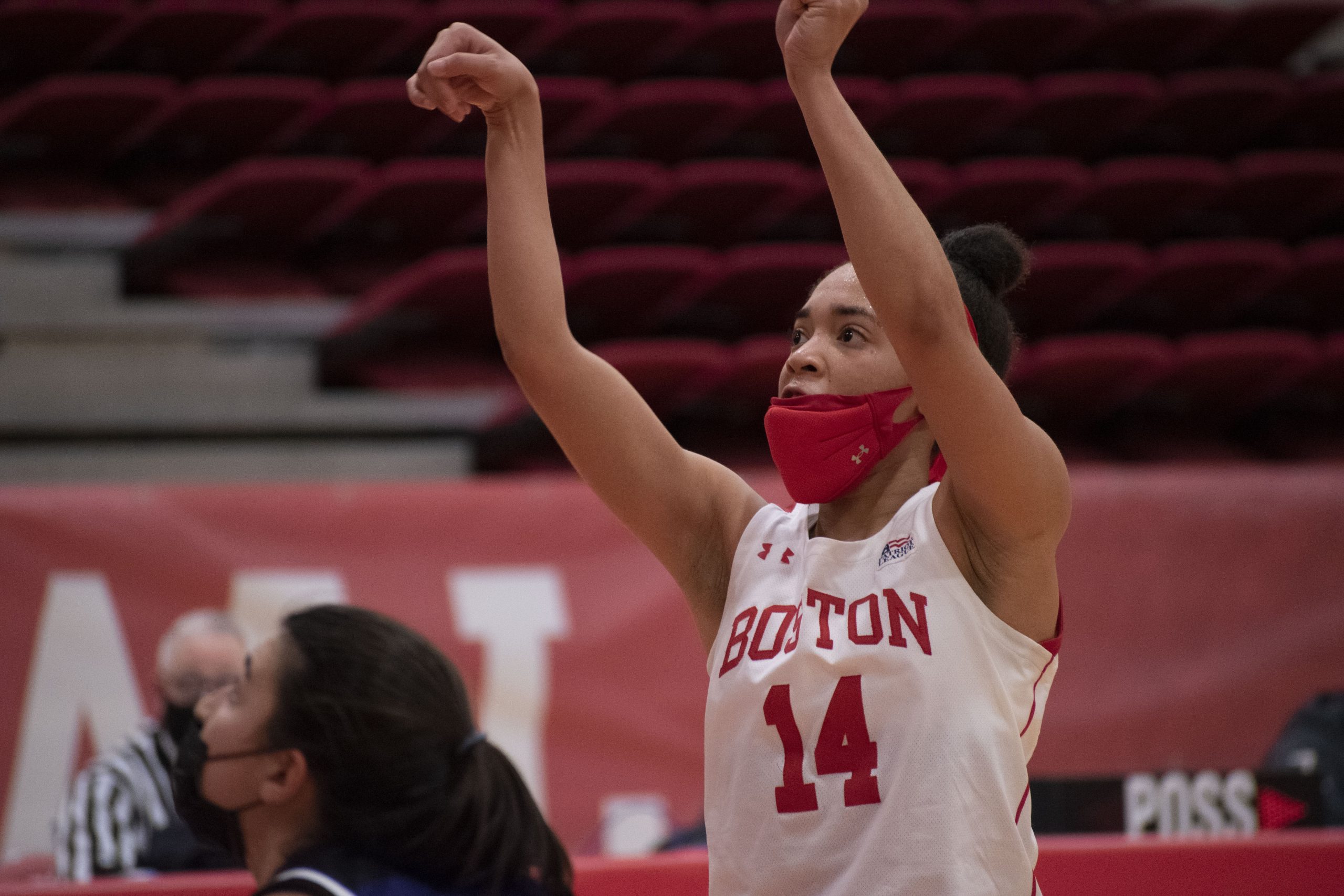 BU’s trio of 2020 All-Rookie sophomores drew the praise and skepticism of viewers ahead of the abbreviated 2021 season. So it was only fitting that Sydney Johnson, Maggie Pina and Maren Durant became Sunday’s X-Factors in the Terriers’ 74-68 quarterfinal win over Lafayette.

The group scored a combined 53 points on 57 percent shooting to lead BU (11-2) out of a sluggish first quarter and into the Patriot League semifinals.

Johnson, who was tabbed a Second Team All-Patriot League member, scored 19 points to go with nine assists and seven rebounds in the signature performance of her early career. After knocking down just five three-pointers during the regular season, she canned four of her six looks against the Leopards.

Perhaps more impressive, however, was the vision. Johnson’s nine assists came against just three turnovers. She became the primary ball-handler for nearly the entire game — an eye-opening sight for Terrier viewers given that Katie Nelson has shouldered almost all facilitating duties over the past few years.

“I really don’t feel like anyone in our league can keep her in front of them,” she said. “When we have the ball in our hands, we know that whether it’s a zone or man [defense], when we set ball screens, she’s either going to get something for herself or get something for her teammates.”

Resident sharpshooter Maggie Pina has struggled to find her shot for most of the season. But Pina broke out of the funk in a big way on Sunday with 17 points, including three big triples that helped BU wrestle back a 38-33 halftime lead.

Center Maren Durant’s afternoon was a tale of two halves. She picked up a pair of early fouls, prompting the hook from Moseley, and sat most of the first half. Chiara Tibbitt subbed in and did her best to contain 2021 Player of the Year, Natalie Kucowski.

Then Durant jumped back in for the second half and dominated. She scored 15 of her 17 points after halftime and finished with 17 and seven boards in just 21 total minutes. According to Moseley, the sets weren’t any different — just Durant’s energy.

“I’ve been telling her the same thing. I don’t think anybody can guard her in the league,” Moseley said. “I’ve just been trying to be her personal hype man or hype woman and tell her: When we throw the ball to you, you’re unselfish, so if you’re double-teamed, kick it out to people. But one-on-one in the paint, go to work.”

Kucowski put up a whopping 21 points, 15 rebounds, four assists and three blocks on Sunday. But she also went just 5-for-11 from the floor and gave up seven turnovers. Moseley knows that teams can only do so much to keep Kucowski off the score sheet. The Terriers’ instead tried to neutralize her teammates and wear her down physically.

“We knew we wanted to make it difficult. Every touch was crowded. On the high post or the low post, she was going to have to earn every shot,” Moseley said.

BU stays at Case Gym for the semifinal matchup, which pits the team against third-seeded American University on Thursday at 6:00 p.m. The Terriers and Eagles have not met all season; their last matchup ended up being the final contest for either side before the pandemic-induced shutdown last March. BU won that quarterfinal game in a 46-44 slog at Case Gym.