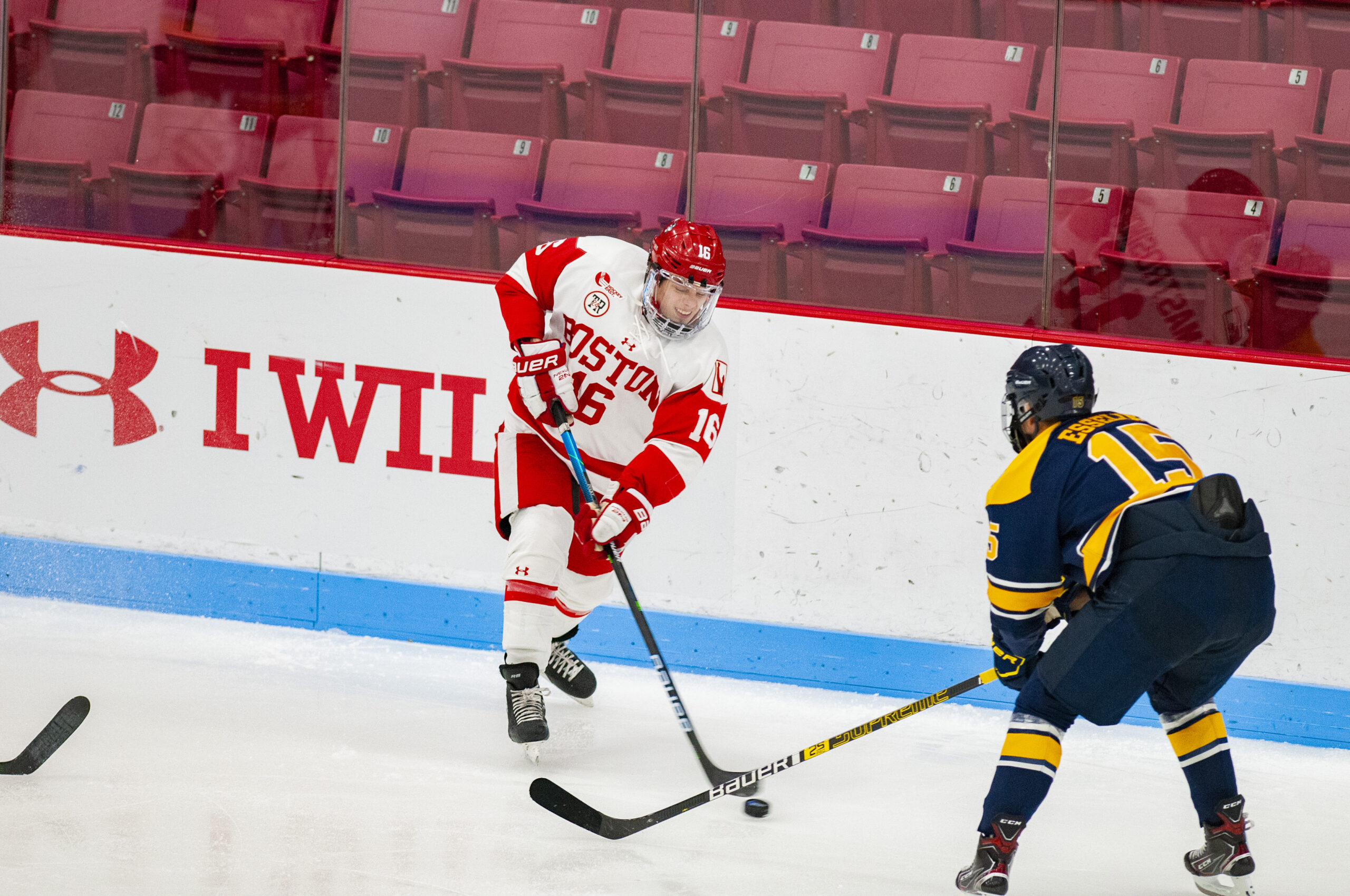 The eighth-ranked Boston University Terriers (10-3-0) got back to playing the kind of hockey that has gotten them into the national top 10 in a 4-2 win over the Merrimack College Warriors (5-11-2) at Lawler Rink on Saturday evening.

BU head coach Albie O’Connell was pleased with how his team responded after Friday’s loss.

“Obviously a lot better effort by us” said O’Connell. “I think overall, each position, forward, defense, and goalies all played better too.”

“That was a huge bounce back win. One of the more important wins of the year.”

Yesterday’s loss left a bad taste in BU’s mouth, as they allowed four goals in the first period and struggled with defensive zone coverages and breaking out of their own zone in a 5-2 defeat at home. The Terriers were leapfrogged by UMass in the Hockey East standings after Friday’s loss.

On Saturday the Terriers executed better and were the better team, overall. Despite their strong play, the Terriers once again fell behind early.

Merrimack got on the board first when senior defensemen and assistant captain Patrick Holway one-timed a feed from sophomore forward Filip Forsmark.  In a similar scenario to the fourth goal of Friday’s contest, sophomore forward Liam Walsh parked himself in front of the net and tipped Holloway’s shot past BU freshman goaltender Drew Commesso (25 saves).

MERRIMACK GOAL: Patrick Holway's blast from the point has eyes and finds its way through. His second of the weekend. 1-0, Warriors, 7:34 into the game. #BUvsMC pic.twitter.com/vwLFTobayI

Despite going down early, O’Connell said his team felt confident that they could come back.

“We’ve got confidence. We’ve gone down before,” O’Connell said. “We were there and I think guys knew that we were playing the right way.”

The Terriers continued to push and with just over three minutes to go, they were rewarded. At the end of a long shift, sophomore forward Robert Mastrosimone cycled the puck to sophomore forward Wilmer Skoog, who wheeled a toward goal. Merrimack goaltender Zachary Borgiel (25 saves) was able to stop Skoog’s attempt, but sophomore forward Markus Boguslavsky was right there to bang home the rebound.

BU GOAL: Markus Boguslavsky cleans up the rebound in front to tie the game at one apiece. About three minutes to go in the first period. #BUvsMC pic.twitter.com/9CErmxYJP4

Following Boguslavsky’s equalizer, BU was able to control the play, especially at the start of the second period. The Terriers had several looks in the offensive zone and 15 minutes into the middle stanza, they were finally rewarded with the go-ahead goal.

Coming off the left wall, sophomore forward Jay O’Brien dished the puck cross-ice to defenseman Case McCarthy, who ripped a wrist shot far side through traffic to put BU in front for the first time this weekend with his first of the year.

BU GOAL: Case McCarthy's wrister has eyes and finds a way through for his first of the year. 2-1, BU, with 14:10 left in the second. With an assist, Jay O'Brien now has a five-game point streak. #BUvsMC pic.twitter.com/enL6nLuV2L

With just three minutes to go in the second, Walsh had a golden opportunity to tie the game for Merrimack when he took a pass all alone in the slot. Walsh tried to shelf it into the open top left corner, but Commesso stood tall and stoned him.

During Vlasic's penalty, Walsh got a Grade A opportunity in the slot, but Commesso came up with a huge shoulder save. #BUvsMC pic.twitter.com/DUNPX0x6Nr

The Terriers went to the locker room with a 2-1 lead after 2 periods.

With a little over 14 minutes to go in the final frame, sophomore forward Robert Mastrosimone stole the puck on the forecheck and fed a wide open senior forward Logan Cockerill in the slot. Cockerill’s initial shot attempt was stopped, but the captain banged home his own rebound to put the Terriers up 3-1.

BU GOAL: Logan Cockerill gets his own rebound to make it 3-1, BU, just over five minutes into the third. Great forechecking pressure from Zabaneh, Cockerill and Mastrosimone leading up to the goal. #BUvsMC pic.twitter.com/Wcqf63UzzF

Mastrosimone, who O’Connell said was “all over the place” throughout the game, collected his second assist of the game on the play.

“I thought [Mastrosimone] was one of our best players,” O’Connell said. “He was arguably one of the best players on the ice tonight. I thought he was our best player last night, so hopefully this is a really good sign.”

Just one minute after Cockerill’s tally, Merrimack answered right back. Forsmark collected a cross ice saucer pass on his off wing and roofed a backhander past Commesso, while streaking down the right side.

MERRIMACK GOAL: Forsmark shovels a backhand towards goal and it finds a way in. Goal stands after an offsides review. 3-2, Terriers, with 13:13 left in regulation. #BUvsMC pic.twitter.com/H56uAMCBn5

The Terriers weathered the storm after Forsmark’s goal, and spent the majority of the next six minutes in Merrimack’s end.

With about five minutes remaining in regulation, the Terriers got an insurance marker on a strong individual effort from Mastrosimone, where he sped down the ice, shielded the puck from two Merrimack defenders, and shoved it past Borgiel for his third point of the night.

O’Connell was impressed with the finesse Mastrosimone displayed on the goal.

“To put that in, the hockey sense to shield that guy off, that was pretty impressive” O’Connell said.

BU GOAL: O'Brien springs Mastrosimone, who shields the puck and reaches around Borgiel to put it home on a partial break. A scrum breaks out after.

The Warriors pushed a little bit late in the game, but never put substantial pressure on the Terriers, aside from a 2-on-1 shortly before Mastrosimone’s tally, where Commesso stood tall.

Commesso robs Gresock's one-timer before scrambling back to cover the puck at the goal line. Wild sequence. #BUvsMC pic.twitter.com/b9fG26Nn09

BU cruised to their 11th win of the season on Saturday and will find out their next opponent on Tuesday afternoon.