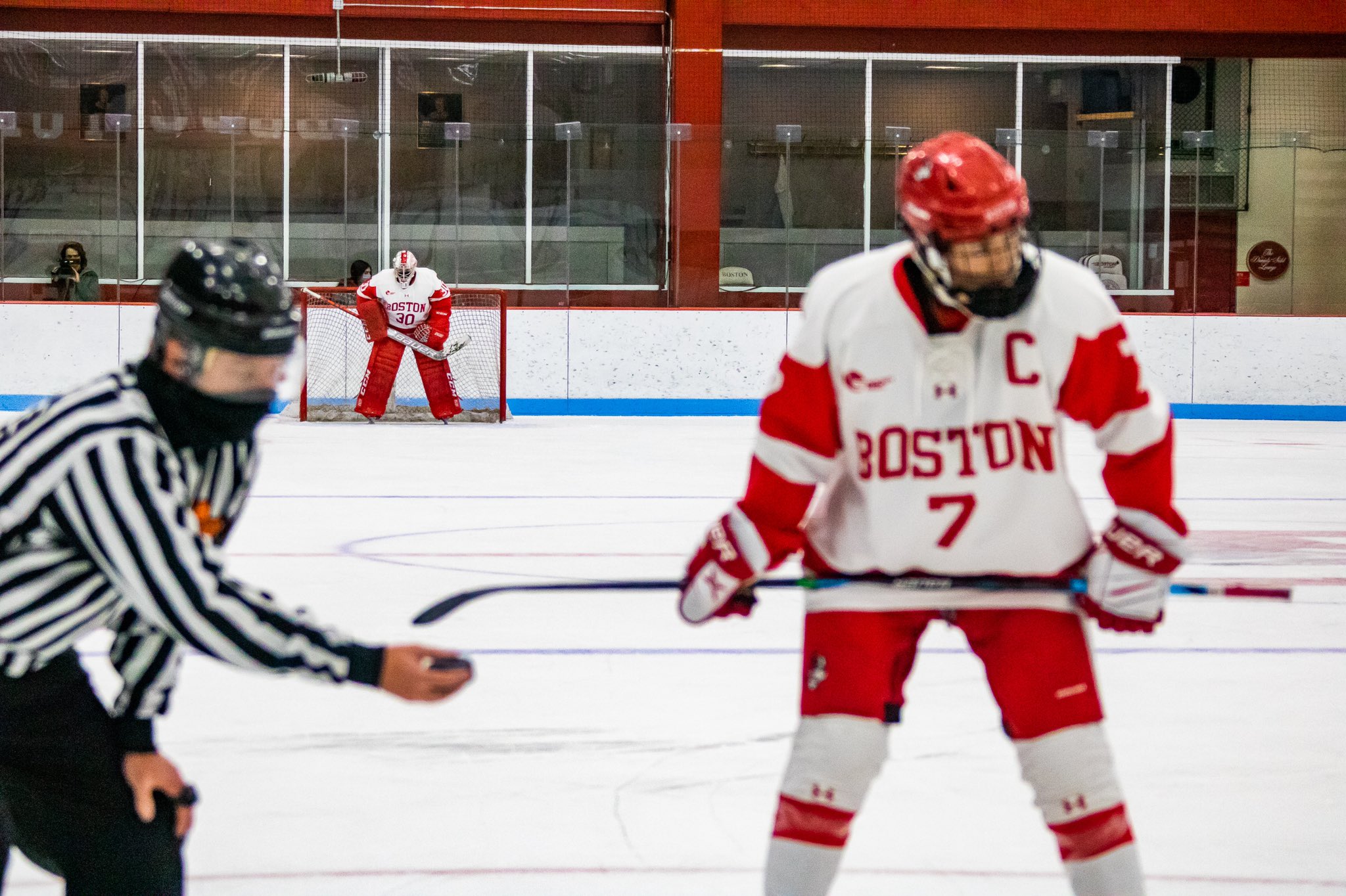 The Boston University Terriers (6-5) skated to a split with the No. 6/6 Boston College Eagles (14-4) this past weekend.

BU came back from a 2-0 deficit after the first period in Friday’s game to win 3-2 late in regulation, thanks in large part to senior co-captain Jesse Compher. However, during Senior Day on Saturday, the Terriers were shut out by the Eagles, 2-0, on home ice.

Here are my three takeaways from the weekend – all opinions are my own:

This team goes with Jesse Compher

Compher has had a knack for three-point games this season, posting another in Friday’s comeback. She was clearly the best player on the ice, especially for BU, getting the Terriers on the board, setting up Mackenna Parker’s equalizer and winning the game late.

BU struggled offensively against UConn and Maine when Compher was out of the lineup, only mustering up two goals in the three games. And when the opposition has managed to neutralize her, or she has had an off game, the Terriers’ offensive attack is not nearly as formidable – see: last week’s 4-0 loss to Vermont and this latest loss to BC.

Compher has been BU’s only consistent source off offense this year, and she’s been a major factor in five of their six wins (she missed their 1-0 win over Maine). Sure, it doesn’t help they’ve been without sophomore forward and talented goal-scorer Julia Nearis for most of the year, but regardless, the Terriers would be lost without Compher this season.

Schroeder hasn’t gotten a lot of help this season

Save for a shaky performance against Vermont last weekend, Schroeder has been her usual, strong self this season with two shutouts, a .925 save percentage and 1.84 goals-against average. Where things become anywhere but normal is her record: 3-4-0.

There’s the rough 4-0 loss to UVM last week (still managed to make 25 saves), a 2-0 loss to Maine (19 saves) earlier this month, the latest loss to BC (29 saves), as well as a 4-1 loss to UConn earlier this season (18 saves), where she got absolutely shelled, no thanks to the lackluster defensive performance in front of her before junior Nicole McGuigan came on in relief in the third period.

Schroeder carded another strong performance in Saturday’s loss, but it was not enough to win as BU could not generate any offense. She’s been just as good per usual, but whether it’s a lack of run support or poor defensive performances in front of her, the senior just hasn’t gotten the help from her team that she deserves.

Uncertainty heading into the playoffs

BU did enough to avoid the play-in round in the Hockey East playoffs, but they still face a tough path ahead of them as the sixth seed. They’ll have to go on the road against a strong Providence team (10-6-1) that has been just as good, if not better, than expected in spite of a disappointing second half.

I pegged BU to finish second in the conference, and that’s how the Terriers were projected in the Hockey East preseason coaches’ poll, with one first place vote. I’m not sure if anyone saw these types of offensive inconsistencies or growing pains on defense coming.

BU squandered early season opportunities against opponents in New Hampshire and UConn that would eventually prove themselves to be weaker before dropping a game to offensively-challenged Maine earlier this month. If the Terriers win those contests, or take a point from them, who knows how much better we feel about this team’s chances heading into the playoffs.

They, for the most part, looked solid in their two toughest tests so far this season in BC and Vermont, both splits, but BU should consider themselves lucky for avoiding perennial juggernaut Northeastern in the regular season. They’ll have to go through a strong Friars team and, I’d assume, Northeastern at some point if they want to make a run at the conference title.

Given the inconsistency and who they’ll be up against, it is understandable to feel uncertain about the Terriers’ chances heading into the playoffs.

Next up for BU and all the women’s teams in Hockey East will be the postseason, which is scheduled to begin Feb. 24 with play-in games. After, the quarterfinals will begin on Feb. 28.

Featured Image: Senior co-captain Jesse Compher (7) gets set for a faceoff, while senior goaltender Corinne Schroeder (30) looks on in a game against BC at Walter Brown Arena on Feb. 20, 2021. Photo by Carolyn Mooney.