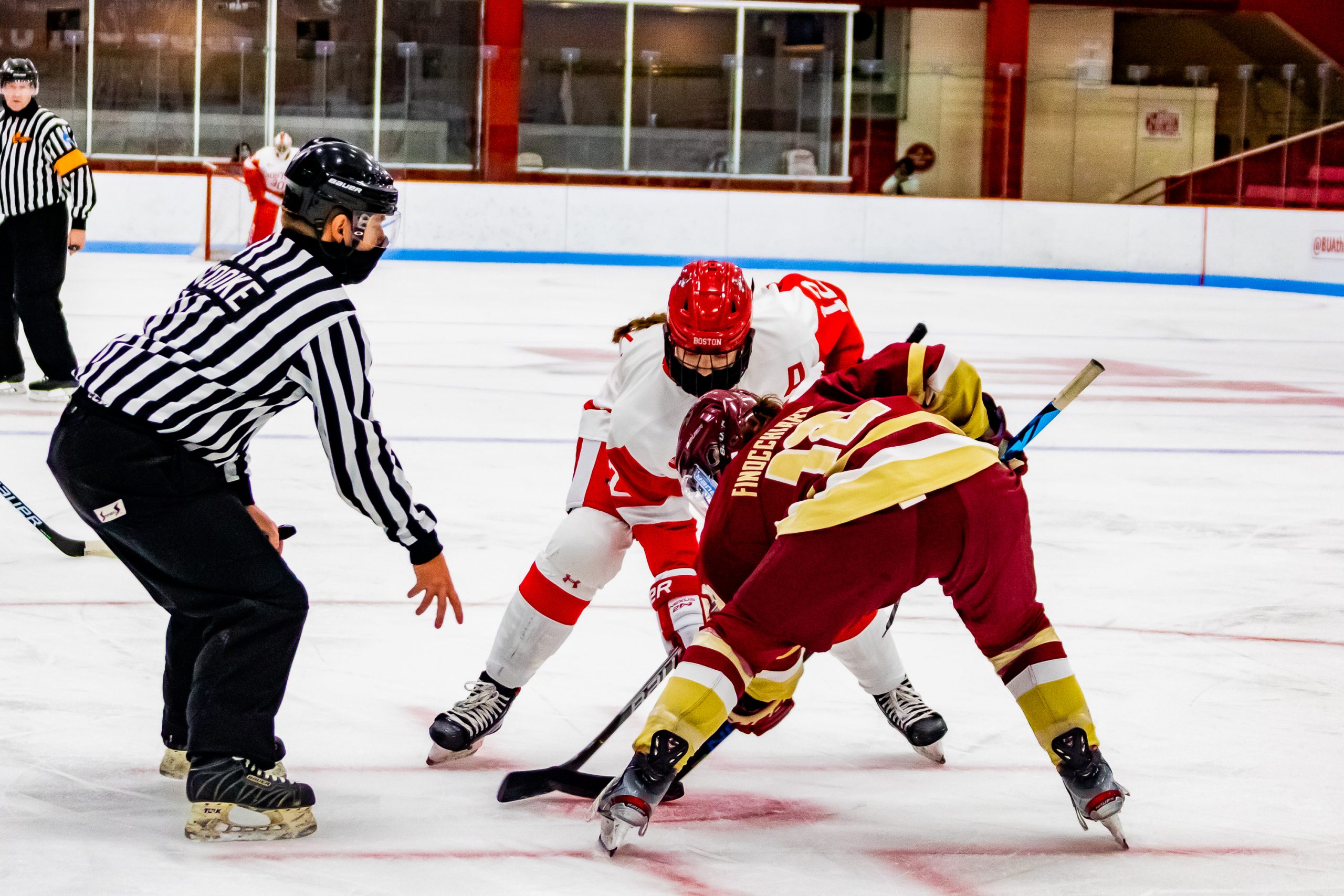 The Boston University Terriers (6-5) fell to the No. 6 Boston College Eagles (14-4) by a score of 2-0 Saturday evening at Walter Brown Arena.

BU head coach Brian Durocher said he believed it was a hard-fought game by both teams to the very end.

“Give the opponent credit,” said Durocher. “There were times when I think the game might have got just a little bit more open than we’d like, but we had the chances right down to the end with a couple of power plays.

Not only was the game against BC their season finale, but it was also Senior Day for BU. The Terriers recognized five seniors prior to puck drop.

Co-captains Jesse Compher and Nara Elia, Kristina Schuler, Rachel Allen, and Corrine Schroeder all received flowers while their coaches held the players’ phones on the bench so their families could see the event over a video call.

“It’s one of those years that’s a bit hollow,” said Durocher. “That extra energy, the extra fun that’s there is missing.”

Durocher then continued to praise his seniors, saying that they made the standards go through the roof while a member of his team.

“They were players that played outstanding hockey for four years and were major contributors,” said Durocher. “You couldn’t have people who are more giving and to help out and be around . . . So proud of everybody that’s worn these jerseys, and these five are great examples.”

Junior forward Jillian Fey collected the puck in Schroeder’s crease, then back-handed it in to give BC the lead.

🎥 A clutch goal from who else but Jillian Fey!#ForBoston🦅 pic.twitter.com/OUAAikY1i3

Then just 18 seconds later, the Eagles found the back of the net yet again. Junior forward Kelly Browne and sophomore forward Hannah Bilka connected on a 2-on-1 rush to put BC ahead by two.

While it appeared to be a clear goal, the officials got together to discuss whether or not a BC player had hit freshman defender Tamara Giaquinto from behind in front of the Terrier bench before the goal was scored. After review, the officials ruled it a good goal and did not rule the hit a five-minute major.

Once the officials made the call, Durocher began questioning the ruling on the ice.

“My thought was that if you’re going to look at a major penalty then, more than likely, you say some type of penalty,” he said. “But, they didn’t feel that was the case.”

The second goal was all the Eagles needed to seal the victory. Despite a 5-on-3 opportunity shortly after the second goal, the Terriers were unable to put one past junior goaltender Abigail Levy.

Levy made 35 stops for the shutout, while Schroeder stopped 29 of the 31 shots that came her way in the loss.

Next up for BU and all the women’s teams in Hockey East will be the postseason, which is scheduled to begin Feb. 24 with play-in games. After, the quarterfinals will begin on Feb. 28.

Hockey East has yet to announce the matchups.

Durocher said that while his team will continue to work on its game, his team has a positive feeling going into the playoffs.

“You have to perform, you have to do the little things, whether it’s the goaltending or blocking a shot, or scoring a goal,” said Durocher. “They do have a positive feeling about that, and hopefully they carry that into Wednesday or the weekend playoff games.”

Featured Image: BU junior forward and assistant captain Kaleigh Donnelly (12) lines up for a faceoff against Olivia Finocchario (12) of Boston College in a game at Walter Brown Arena on Feb. 20, 2021. Photo by Carolyn Mooney.