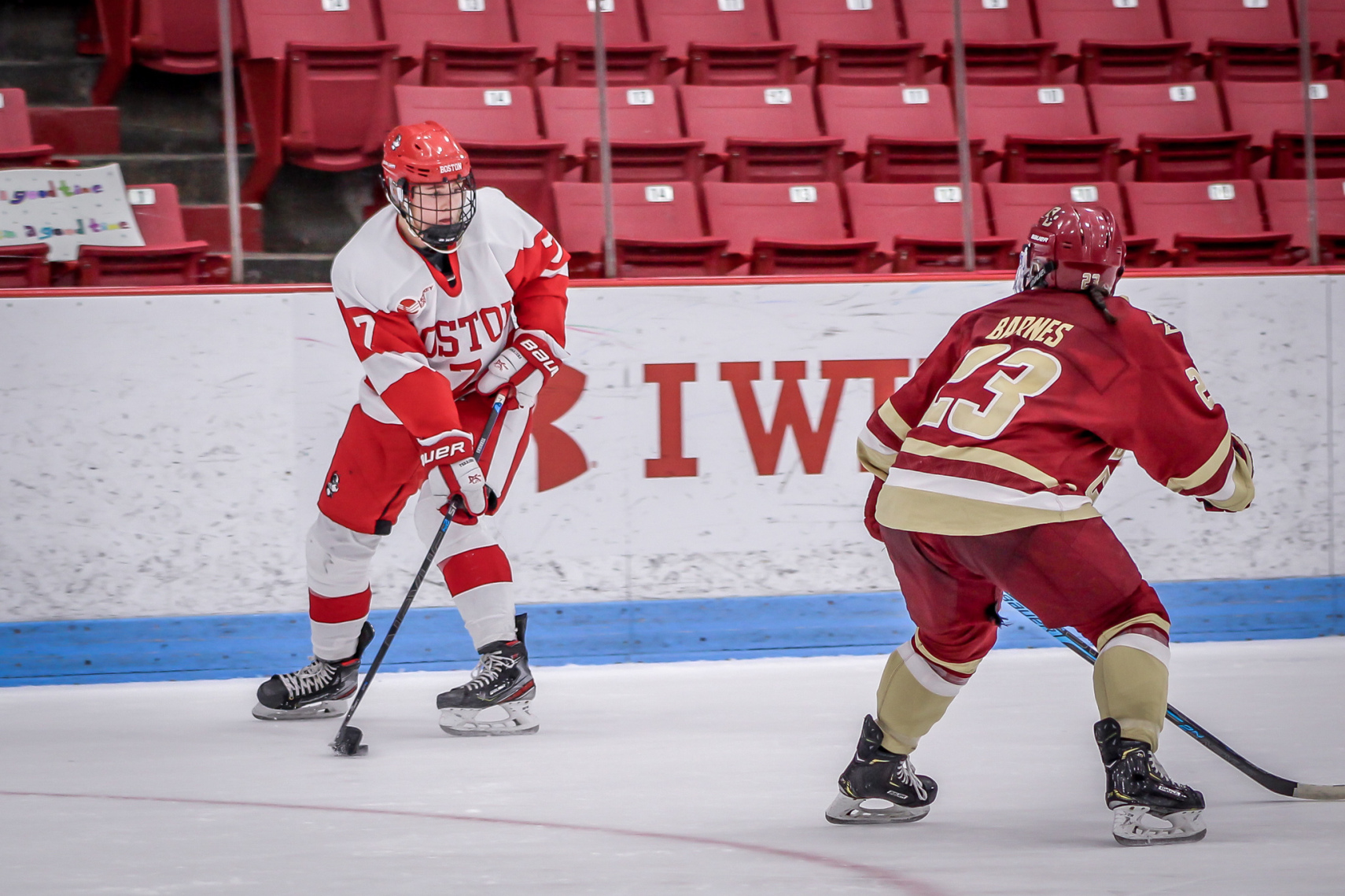 The Terriers rallied from a 2-0 deficit after the first period to win 3-2 late in regulation. Compher had two goals and an assist, including the game-winning goal, while Stuart stopped 27 of 29 shots.

The Terriers were previously 0-17-1 since the 2017-18 season when trailing after two periods. BU head coach Brian Durocher was pleased with how his team responded as the game went on.

“It was just a game that kept getting better and better for our team, and I’m proud of the way the kids fought back,” Durocher said. “I think they learned some lessons today about what they can do and how to be resilient out there.”

Like Stuart for BU, junior netminder Abigail Levy got the start in net for the Eagles, making 24 total saves.

BC put the pressure on the Terriers early on in the game as Stuart had to make a number of saves, first stopping BC freshman forward Caroline Goffredo’s deflection, before making a nice kick save on senior co-captain Maegan Beres in a partial break and most notably stopping junior forward Savannah Norcross on a breakaway.

Before Browne's goal, Savannah Norcross found a gap and broke in alone on Stuart, who made a big stop. #BUvsBC pic.twitter.com/K5ExZ4g5Yb

Shortly after Norcross’ opportunity, the Eagles broke through.

With the Terriers under siege, BC junior forward Kelly Browne wheeled around the offensive zone and let a shot go from the point. The puck found its way through a number of players in front of Stuart, and snuck inside the right post to give the Eagles a 1-0 lead with 7:13 remaining in the opening frame.

BC GOAL: BU under siege in their own end, and Kelly Browne lets one go from the point. Seeing eye shot finds a way through and gives BC a 1-0 lead with 7:13 remaining in the first. #BUvsBC pic.twitter.com/k9YxI2wHCv

BU was unable to garner much of a response following Browne’s opening goal, and BC made them pay for it, doubling the lead in the closing seconds of the first.

Browne fired a one-timer that missed wide, but the Eagles were first to the rebound. Sophomore forward Hannah Bilka backhanded the puck on goal, and the Terriers could not get to it as Norcross found the loose puck and put it past Stuart to make it 2-0.

Durocher said the team needed to tighten up its game after the first 20 minutes in order to come away with a positive result.

“I think that the first period was not how we wanted the game to go,” he said. “I think the game was just too wide open.”

“I think it really had a lot to do with our execution, or lack of execution. One of the things I usually tell the team is don’t make the other team better than they are. They’re a good team, they skate well. But let’s not make them look like superstars.”

BC GOAL: Norcross doubles BC's lead with 2 seconds remaining in the first. Browne misfires on the one-timer as BU scrambles. Puck pinballs around in the crease, Norcross finds it and beats Stuart. #BUvsBC pic.twitter.com/QSETSbtqhz

Just over three minutes into the second period, BU broke through.

On the power play, Compher took a pass at the point before darting down the right side of the offensive zone. She sent a quick wrist shot towards Levy, who was screened by BU senior co-captain Nara Elia, and the puck found its way under her glove and into the net to make it 2-1, BC.

BU GOAL: Jesse Compher pulls BU back within one on the power play. Gets the puck at the top of the umbrella, wheels down the half wall and beats Levy low side. Elia with the screen in front. #BUvsBC pic.twitter.com/3zpueYuICK

The Eagles got two consecutive power play opportunities as the period went on, but squandered each. BU failed to cash in on an advantage of their own.

Late in the middle stanza, Stuart was forced to make another big stop.

Bilka skated into the Terriers’ zone and exposed a gap in the BU defense, walking into the slot and firing towards Stuart, who had tracked her the entire way to make the save, keeping the game at 2-1 heading into the second intermission.

Hannah Bilka walks through the BU defense unchallenged, but Stuart tracks her the whole way and makes the save. #BUvsBC pic.twitter.com/VgaFnuKN81

Early in the third, the Terriers got the equalizer.

Compher and freshman forward Catherine Foulem won a battle on the forecheck to keep the play alive for BU. Compher took the puck and found junior forward Mackenna Parker streaking down the slot, and she one-timed it by Levy to tie the game at two goals apiece.

Compher’s assist is the 81st of her career, which moves her into a tie with Kayla Tutino for the fifth-most in program history.

BU GOAL: Compher finds Mackenna Parker coming down the slot, who one-times it by Levy to tie the game at 2-2 about three minutes into the third. #BUvsBC pic.twitter.com/oFQSr8h5ud

BU took control of the game from that point on as the Terriers piled on several chances to potentially take the lead.

First, Elia found freshman defender Julia Shaunessy on a 2-on-1 opportunity, who nearly chipped it past Levy, but BC senior defender Cayla Barnes swept the puck off the goal line. Then, junior forward Courtney Correia almost beat Levy as well, ringing a shot off the crossbar.

Both teams failed to cash in on each of their late power play opportunities as the Eagles found an extra boost late in regulation.

In BC’s brief surge, Stuart was forced to make the save of the game. Browne dangled around sophomore defender Grace Parker and set up Bilka with a cross-crease feed. But Stuart made a strong post to post push and got there in time to make a huge glove stop on Bilka, maintaining the 2-2 tie.

BIG save by Kate Stuart late in regulation, pushing post to post to make the glove save on Hannah Bilka's one-timer. #BUvsBC pic.twitter.com/DaTrW6JxXq

Durocher was complimentary of the junior’s night in between the pipes.

“Kate Stuart made one fantastic save late in the second and then an even better one late in the third [both on Bilka] that allowed us to get that third goal,” he said.

After withstanding the Eagles’ push, the Terriers capitalized with under a minute remaining.

Junior defender Alex Allan uncorked a one-timer from the point, which missed wide, but Foulem was right there to get a rebound opportunity. Levy made the stop on Foulem, and thought she had the puck covered. But Compher came crashing into the crease, knocking the puck loose and into the back of the net to give BU a 3-2 lead with 40.3 seconds left on the clock.

The score held as the final horn sounded as BU captured the first game of this weekend’s Battle of Comm. Ave.

BU GOAL: Jesse Compher gives BU a 3-2 lead with 40.3 seconds remaining in regulation. Compher jams away at the puck as Levy thought she had it sealed off, and it finds a way in. #BUvsBC pic.twitter.com/LGo84fvd4T

Compher finished the game with three points (2g, 1a), making for four goals and two assists in her last two contests. Durocher knows how much of a difference-maker she can be.

“An awful lot can happen when your top player’s feeling good and and her confidence is up,” he said.

With the win, BU has won three-straight against BC.

The Eagles had won nine games in a row entering the afternoon, and Durocher feels his young team, especially the defense, stepped up admirably against a tough opponent.

“I’ve got to tip my cap to our team today,” he said. “I thought our defenders grew up, the young kids in particular.”

“They all sort of graduated a little bit today to get now 10 games under their belt and play a game against a fast team like [BC]. They had to answer the bell . . . Now they’ve just got to bounce back, bring it tomorrow, and bring it into the playoffs.”

BU and BC will return to action tomorrow afternoon during Senior Day at Walter Brown Arena. Puck drop is set for 4:30 p.m.

Featured Image: Senior forward and co-captain Jesse Compher (7) looks to pass as she is defended by Cayla Barnes (13) of Boston College during the Beanpot semifinals at Walter Brown Arena on Feb. 4, 2020. Photo by Hannah Yoshinaga.