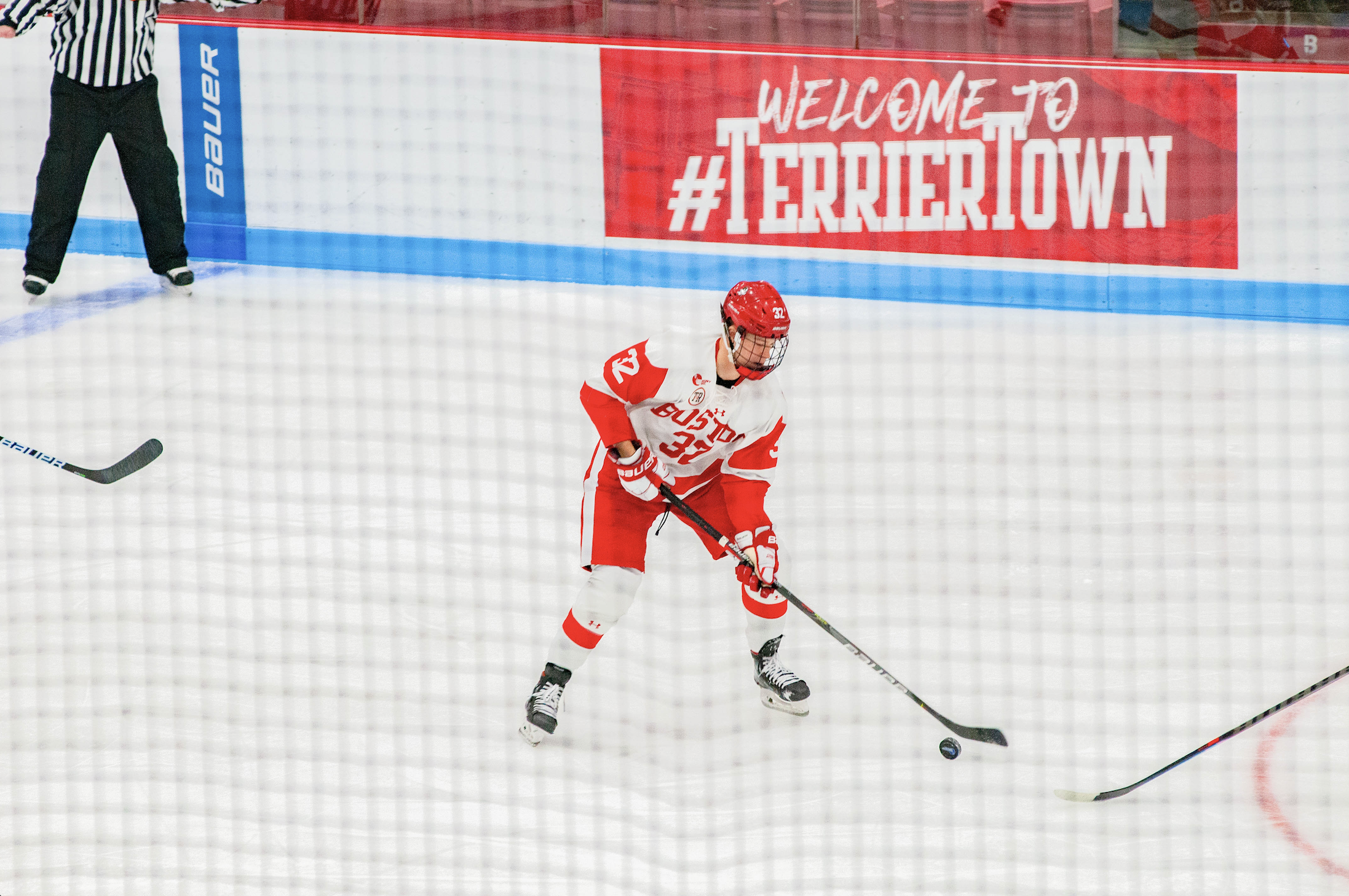 Two of the conference’s most exciting teams will square off tomorrow afternoon as the No. 11/12 Boston University Terriers (8-2) visit the University of Connecticut Huskies (8-8-2).

The two teams were originally slated for a two-game series, beginning at BU’s Walter Brown Arena on Friday, but the first game was curiously called off by Hockey East. The league said COVID-19 protocol is not responsible for the game not being played, and Saturday’s contest at UConn is slated to go on as planned.

Mark Divver of New England Hockey Journal reported Friday morning that BU is down to one goaltender, freshman Vinny Duplessis.

Teams need to be able to dress two goalies for games, so whatever potential issue sophomore Ashton Abel is dealing with could only be enough to hamper him for the one game. BU head coach Albie O’Connell said this week that freshman Drew Commesso was back at practice this week and would not be available to return until next week, which takes him out of the equation this weekend.

Whatever the case for the second game, it is a peculiar situation, especially for a BU team coming down to the wire in terms of reaching the NCAA’s minimum of 13 games. Both teams are available on Tuesday, perhaps there is a midweek game to be had.

The Terriers come into this matchup having won three-straight games, most recently sweeping lowly Vermont. BU is unbeaten in regulation in their last nine contests,  losing in regulation in the season opener against Providence, winning five in a row and falling to No. 1 Boston College in overtime before this recent winning streak.

“We obviously had a pretty good weekend on the road [against Vermont], and that kind of leads us into practice this week,” O’Connell said. “We’ve had a couple of good practices, a couple days off, just with the travel and whatnot.”

The Huskies enter the weekend having lost two in a row, first to UMass Lowell in overtime before falling to Providence, after winning four straight. Head coach Mike Cavanaugh’s team – dubbed the Ice Bus – has given some of the league’s best teams fits this season, beating BC twice in shootouts, beating No. 10 UMass in a shootout and handling No. 14 Northeastern earlier this season.

“UConn poses a lot of different problems for for any opponent,” O’Connell said. “They’ve got good size, have good strength. They’re highly competitive, they’ve got great speed and they’ve got some deadly weapons.”

The Huskies have been led offensively by junior forward Johnny Evans, who has 12 goals and 10 assists for 22 points in 18 games on the year. Closely behind him is junior forward Jáchym Kondelík, who has 16 helpers in 18 games. Sophomore forward Vladislav Firstov is also scoring at a point per game clip with 11 points (3g, 8a) in 11 contests.

In goal, junior netminder Tomáš Vomáčka has been a workhorse for the Ice Bus, playing the entirety of all 18 games. On the season, the Czech Republic native has an 8-8-2 record with one shutout, a .916 save percentage and a 2.58 goals-against average.

O’Connell knows his team is going to have to bring its best against Vomáčka.

For BU, senior defenseman and assistant captain David Farrance has been sidelined the last two weekends, but should he return he’ll have plenty to build on. The Hobey Baker candidate has 14 points (4g, 10a) in six games on the season, averaging 2.33 points per game as a blueliner.

Behind him, sophomore forward Jay O’Brien has 10 points (6g, 4a) in 10 contests for the Terriers, while freshman forward Luke Tuch has four goals and four assists for eight points in 10 games. Senior forward and co-captain Logan Cockerill, who returned from injury last weekend, has five points (4g, 1a) in six games, and sophomore blueliner Alex Vlasic is having a career season with 3-4-7 numbers in 10 contests.

Between the pipes for the Terriers, Duplessis has stepped up admirably in Commesso’s absence.

After earning his first win in his first career start, a 40-save performance against BC, Duplessis followed up with his first career shutout in one of his two wins agains UVM last weekend. On the season, he is 3-0-0 with a .974 save percentage and an 0.67 GAA.

More notes from around the rink…

O’Connell said that junior forward Jake Wise is available this weekend against UConn. Wise has not played since the second game of the season, a 5-4 win at Providence.

Joining Commesso back at practice this week is Farrance. O’Connell also said the team expects him to be available next week.

Those combinations, whether it be just Tuch and Skoog or all three, have paid dividends for BU. O’Connell feels all three bring something to the table to help enhance each other’s games.

“From [Tuch and Skoog] clearing space, to [Skoog] who can make a play, to [Mastrosimone] who can trigger and put the puck in the net, it seems like it’s worked pretty well for us,” he said. “I like the makeup of that line for sure.”

UConn has given BU plenty of problems of late

BU is 9-5-3 against the Huskies all-time, but last year, UConn had the upper hand over the Terriers. The Huskies won the first meeting of the season, 4-3 in overtime, before trouncing BU, 6-1, at Agganis Arena. O’Connell knows his team will have to be at its best.