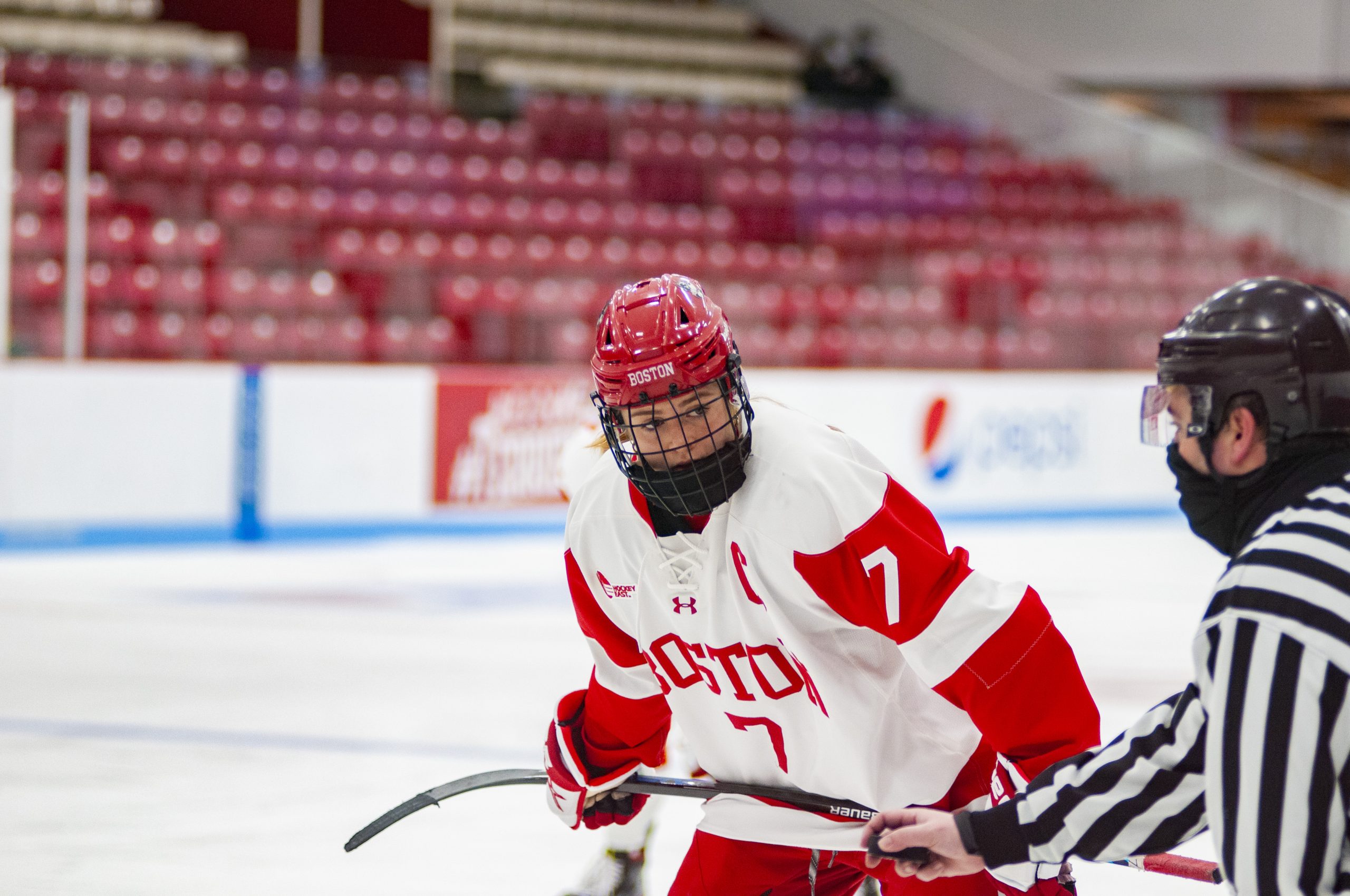 The Boston University Terriers (5-4) are once again scheduled to face the sixth-ranked Boston College Eagles (13-3), although this time, it looks as though the two sides will actually square off in the Battle of Comm. Ave.

The Terriers and Eagles were twice previously scheduled to play each other earlier this season before each series was called off on separate occasions. For BU, head coach Brian Durocher says the mental preparation stays consistent.

“Hockey such a real react game that you’ve got identify who the most dangerous kids are on BC, and you’ve got to talk about doing the right things on both special teams,” he said. “There’s only so many ways to skin a cat. As long as we do a good job with those couple general things, then it’s up to the kids to be relaxed.”

The two games between BU and BC will mark the end of regular season across the women’s side of Hockey East. Durocher says it is a strange feeling to be so close to the playoffs already.

“It’s a somewhat hard to believe that we’re at the end of the regular season, probably because I see the number nine as ‘games played’ versus maybe 34 or 35,” he said. “Truth be told, we have been at it for five months in all kinds of different ways.”

The Eagles come into the series on a nine-game win streak, last losing on Dec. 11 in a 4-1 defeat at the hands on No. 2 Northeastern. Most recently, BC took down No. 10 Providence at home, winning 2-1 in overtime.

Offensively, the Eagles have been paced by junior forward Savannah Norcross, who has 10 goals and eight assists for 18 points in 16 games. Junior forward Kelly Browne is also scoring at over a point per game pace with 18 points (6g, 12a) in 16 games. Sophomore forward Hannah Bilka is not far behind with six goals and seven assists in 15 games on the year.

In goal, junior netminders Abigail Levy and Maddie MacArthur have split the net almost evenly this season. Levy, a transfer from Minnesota State, has a record of 5-1-0 in seven appearances to go along with one shutout, a .962 save percentage and a 1.13 goals-against average. Meanwhile, in six appearances, MacArthur has a 5-1-0 record, a .921 save percentage and a 2.55 GAA.

Not to be forgotten is fellow junior goaltender Kelly Pickreign, who holds a record off 3-1-0, a .927 save percentage and 1.76 GAA in four appearances on the season.

For BU, senior forward and co-captain Jesse Compher has led the way in terms of production with five goals and three assists for eight points in six games. Junior forward Courtney Correia is not far behind with eight points (2, 6a) in nine contests on the year.

Puck drop at Conte Forum is set for 2 p.m. on Friday afternoon, while Saturday’s rematch at Walter Brown Arena is scheduled to get underway at 4:30 p.m.

More notes from around the rink:

Saturday will mark Senior Day for the Terriers. This year, BU has a group of five seniors, and Durocher knows a day like Saturday is always filled with mixed emotions.

“Well, it’s always an exciting and fun day, but it’s also a slightly sad day,” he said.”Thankfully, there’s playoffs afterwards so we’ll see them out there doing their thing again.”

“We’re lucky that we have another group here in these five that have made great contributions academically, successful contributions on the ice and all throughout the community. They do a lot of unselfish work that we can all be proud of, and are super happy that they were Terriers for the past four years.”

Compher headlines this year’s group with the ninth-most points (124) in program history currently. With 80 assists, she’s one away from tying Kayla Tutino for fifth-most all-time (81) at BU. Her seven career shorthanded goals are second-most in program history, two behind Marie-Philip Poulin.

“She is easy identify as the top kid in the group and somebody who’s gotten her due as a, as a top, top player,” Durocher said.”

Schroeder also has made her mark in the Terrier record books with the second-most career wins (49), the third-most shutouts (8), the third-most total saves (2270) in program history. As of the beginning of the season, Schroeder holds the highest career save percentage (.930) and GAA (1.96) of any BU goaltender.

“The last line of defense is where Corinne sets up shop, and she’s had a great career to help us all, being a steadying influence back there, not only making saves but handling pucks,” Durocher said.

Forward and co-captain Nara Elia has 30 goals and 35 assists for 65 total points in 117 games as a Terrier. Forward and assistant captain Kristina Schuler has 48 points (18g, 30a) in 116 contests during her time at BU. The two forwards have formed quite a connection over the last few seasons, making up two thirds of their line nearly every game.

“Nara from day one has played strong, played physical an that probably parallels the same thing Kristina Schuler does,” Durocher said. “Nara might do it in front of the net or along the walls, where Kristina might do it end-to-end a little bit more with her speed and her power to get around the rink.”

Forward Rachel Allen returned this season after only suiting up in one contest last year due to injury. On her career, she has two assists in 77 games played.

“She’s kind of a consummate teammate and somebody who never stops working, and even this year, coming off of a quirky knee situation,” Durocher said. “She’s fought through and she’s been there ready for us, and has made contributions everywhere here at Boston University.”

Power play may have found a spark

The Terriers have gone cold on the power play this season, converting on just 10 percent of their opportunities. In Saturday’s win over Vermont, BU cashed in on the advantage for the third time this season, thanks to Elia. Durocher hopes Elia’s power play goal can serve as a needed jolt to the unit.

“it gives them confidence, and it gives them feel that they’ve scored one,” he said. “We were spoiled the last couple years being in the mid-20s [percentage-wise], but most of this year they’ve done a good job of moving it around and getting to places.”

Potential to split the series between the goaltenders

Schroeder and Stuart have had a timeshare in goal over the last two series. Durocher said a similar game plan with his netminders could be in place this weekend.

“There’s probably a reasonable chance that can happen,” he said. “It’s a Senior Day for Corinne on Saturday, so I’d like to think that she’ll be there [in goal].”

No new additions to the lineup from last week

With the return of sophomore forward Haylee Blinkhorn last week, the Terriers trotted out a complete lineup with four full forward lines, three defense pairs and an extra skater.

BU has still been without sophomore forward Julia Nearis and freshman defender Madison Cardaci, and Durocher does not expect either to be available this coming weekend.

“I don’t think we’ll see either one this weekend,” he said. “But thankfully we’ve got a pretty packed hand there with four full lines, six D and good goaltending.”

“While it would be great to have those two, you go to battle with who you have, and I like our chances.”

Featured Image: Senior forward and co-captain Jesse Compher lines up for a faceoff in a game against Vermont at Walter Brown Arena on Feb. 12, 2021. Photo by Patrick Donnelly.