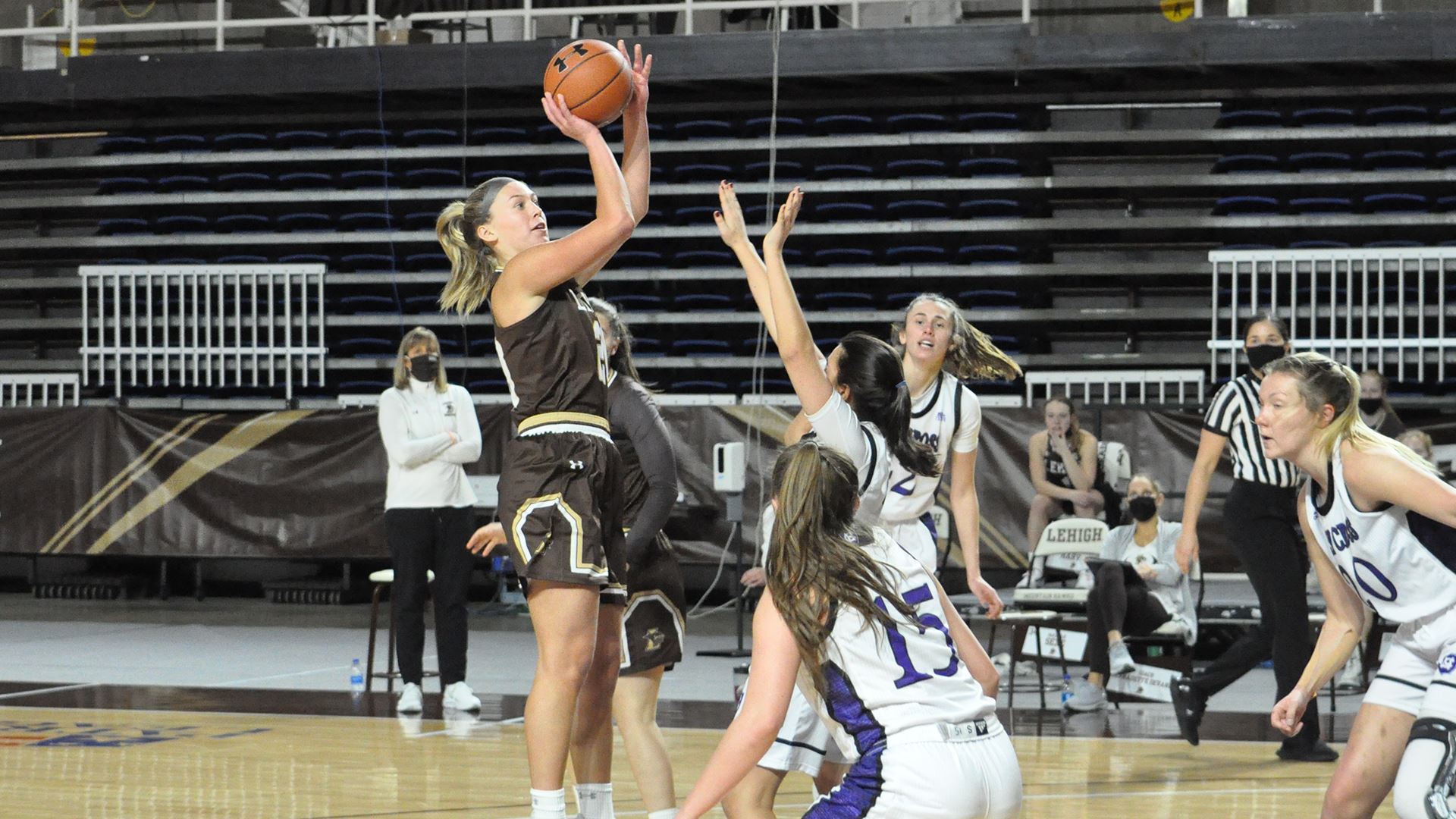 We’re now approximately at the halfway point of the Patriot League schedule, but we haven’t gotten a complete look at all of the teams in the conference due to coronavirus-related postponements. The only team in the conference to play a full schedule through this weekend will be Lehigh, assuming the Mountain Hawks’ series against Bucknell takes place.

Bucknell and BU look as strong as ever, while small sample sizes from Lafayette, Navy and Loyola Maryland have made it more difficult to determine where they should actually fall in the conference power rankings.

For this edition of the Power Rankings, Ethan Fuller and Hannah Yoshinaga evaluate each team at the midway mark of the season.

🚨UPDATE🚨
This weekend's @Bucknell_MBB & @Bucknell_WBB games vs. Lehigh are back on as scheduled. The COVID-19 test results previously announced as positive have been amended to negative results by the testing lab after discovery of a recording error. https://t.co/vkIiM9fwzk

The Bison didn’t play last week, so we don’t have new material to hype them up as one of the best mid-major teams in the country. But their previously postponed series this weekend against Lehigh is back on! So we can see another great matchup between two of the best teams in the Patriot League. If Bucknell can sweep the Mountain Hawks again, it should be smooth sailing for the remainder of the regular season.

With the second-best scoring offense, the best scoring defense and a plus-21.3 scoring margin so far, Bucknell is in firm control of the conference. Abby Kapp, Taylor O’Brien and Tessa Brugler are a certified Big Three. Any of them can go off on any given night. — Ethan Fuller

This week: January 30 vs. Lehigh, January 31 at Lehigh

Boston University paused all athletic activities this weekend, so the Terriers will not have at least two weeks between their last game — and first loss — and their next weekend series.  We’ll see if Marisa Moseley and Co. can rebound quickly, or if that defeat at Army will get in their heads. BU has eight of its remaining ten games at home, by the initial scheduling.

Moseley has turned the Terriers into a defensive stronghold, giving up just 53 points per game and forcing a league-high 18 opposing turnovers. They still have work to do on the offensive end, as evidenced by the one loss. But BU is poised for playoff success with such a stingy defense.— Ethan Fuller

.@FrannieH23 had it all working on Sunday, especially her mid-range jumper en route to a career-high 27 points against Holy Cross.

At last, a team who has played all of their games! Lehigh has dodged the COVID-19 bullet so far and is on track to play in a critical rematch against Bucknell this weekend. The Mountain Hawks came back strong against Holy Cross, sweeping the Crusaders and improving to 6-2. They’re not in the Tier 1 class with Bucknell and BU, but they’re clearly a step above the rest of the league.

Lehigh has demonstrated an increasingly well-rounded offensive attack. Sophomore Frannie Hottinger put up a career-high 27 points in last Sunday’s victory and tallied a 19-point, 10-rebound double-double on Saturday. But she didn’t even win Player of the Week; that belonged to senior Mariah Sexe, who scored a career-high 25 points to go with 10 rebounds in the Saturday win. Mackenzie Kramer also took home Rookie of the Week honors in a sweep of the weekly awards by the Mountain Hawks. — Ethan Fuller

This week: January 30 at Bucknell, January 31 vs. Bucknell

While the Eagles’ season got off to a rocky start against Lehigh, their offense has been one of the best in the conference through six games. They’re averaging 66.7 points per game, trailing only Lehigh and Bucknell. As expected, junior guard Jade Edwards is leading that charge with a Patriot League-best 20 points per game on 55% shooting from the floor. Indeya Sanders and Taylor Brown are also shooting well, ranking in the top 30 scorers in the conference.

However, while their overall offensive numbers have been strong, American could stand to improve from beyond the arc, where the team is shooting only 25%. Free throws have been a problem as well, and the Eagles rank last in the conference in free-throw shooting (67.7%). If the Eagles can get better in those two areas, their offense could be unstoppable or close to it. — Hannah Yoshinaga

The Crusaders have outperformed preseason expectations after suffering some of the biggest losses in the conference during the offseason, benefitting from the high-volume scoring of junior guard Avery LaBarbera and the immediate contributions from freshman forward Bronagh Power-Cassidy.

Although they’ve picked up some solid wins and put up a valiant fight in their losses, efficiency has been a big problem for Holy Cross. The Crusaders are shooting just 31% from deep despite attempting the third-most three-pointers in the league. The numbers aren’t much better from inside the arc either, where they lack a dominant post presence who can battle with the top players in the conference. Wherever they are on the court, the Crusaders must focus on better shot selection in the second half of the season. — Hannah Yoshinaga

Army has been up and down all season, although they’ve looked impressive during stretches — including their impressive win against BU. The Black Knights’ defense has been a pleasant surprise, and they’ve held some tough opponents to respectable scoring totals.

Junior Alisa Fallon has proven herself to be a top-notch team leader yet again, which has helped the young Army squad to find its footing early on. Freshman Lindsey Lithgow quickly found her place in the starting lineup, figuring to take on an even larger role as she adapts to the college game.

The Black Knights can improve and make a stronger case for a playoff spot if they get more aggressive on the boards, where they’ve been outrebounded by opponents, and become more careful with the ball — Hannah Yoshinaga

The Leopards’ season hasn’t gone anything like they probably anticipated it would, with four straight losses to competitive teams to begin the season and a two-week break from games after a positive test in their program.

Lafayette hasn’t had much success on either end of the floor thus far, averaging 59 points per game on offense while giving up 78.2 on the defensive end. Drew Freeland and Naomi Ganpo emerged as solid complements to Natalie Kucowski, but the Leopards simply haven’t had the firepower to take over games and secure wins. Conditioning figures to be another problem after spending two weeks away from the court, which won’t help Lafayette given their schedule moving forward.

The Leopards need to hit the ground running when they return and figure out their team’s identity on both ends of the floor. If they don’t, Lafayette might find itself in an precarious position when it comes to securing playoff spots at the end of the season. — Hannah Yoshinaga

This week: January 30 vs. American, January 31 at American

Another positive COVID-19 test halts the Mids’ somewhat promising 2-2 start to the season. We pegged Navy as the worst of the conference, but the team earned another respectable split with Army this past weekend. We’ll see how yet another shutdown affects the players.

One standout has been Jennifer Coleman, who missed nearly all of conference play last season due to academic eligibility requirements. Her stat line is pretty ridiculous: 16 points, 10.5 rebounds, 3.8 assists and 2.3 steals across four conference games. She’s a serious difference-maker for Navy and a potential All-League First Team wing.— Ethan Fuller

Scheduling adjustments to be announced at a later date.https://t.co/0TCqYIjLsE pic.twitter.com/dBXOv1q58q

While the Raiders’ offensive numbers have hovered around league average, Alexa Brodie and Keelah Dixon have emerged as the team’s leaders on that end of the floor. Katlyn Ghavidel has also been a solid contributor on that end, serving as a good option off the bench.

However, the Raiders have really struggled to make it work on the defensive end, which has held them back and progressively pushed them farther down the league standings. Colgate is outscored by over 11 points per game on average, and they’ve had some tough losses after giving up over 70. The Raiders must develop more defensive discipline and make life harder on opposing shooters if they want to climb out of their 1-5 hole. — Hannah Yoshinaga

Delaney Connolly (13 points, 5 rebounds) and Emily McAteer (11 points, 6 rebounds) led the way for @LoyolaWBB, but it wasn't quite enough in a 67-58 setback at American. The Greyhounds are back at Reitz next Saturday, hosting Navy at 1 pm.https://t.co/mjMD3wDuEt

The Greyhounds got back on the court last weekend, but it didn’t go so well for the inexperienced roster. They lost 64-45 on Saturday and 67-58 on Sunday against American, despite some solid performances from sophomore Emily McAteer. Maybe it’s rust from a two-week absence, but this team hasn’t reached 60 points once yet.

If anything is to change, Loyola Maryland has to find some semblance of consistent scoring. The Greyhounds are making shots at a depressing 31.6 percent clip. Only one player — sophomore guard Bri Rozzi — is shooting over 38 percent from the floor. A pretty solid defense is helpless against an offense that bad. — Ethan Fuller

This week: January 30 vs. Lafayette, January 31 at Lafayette