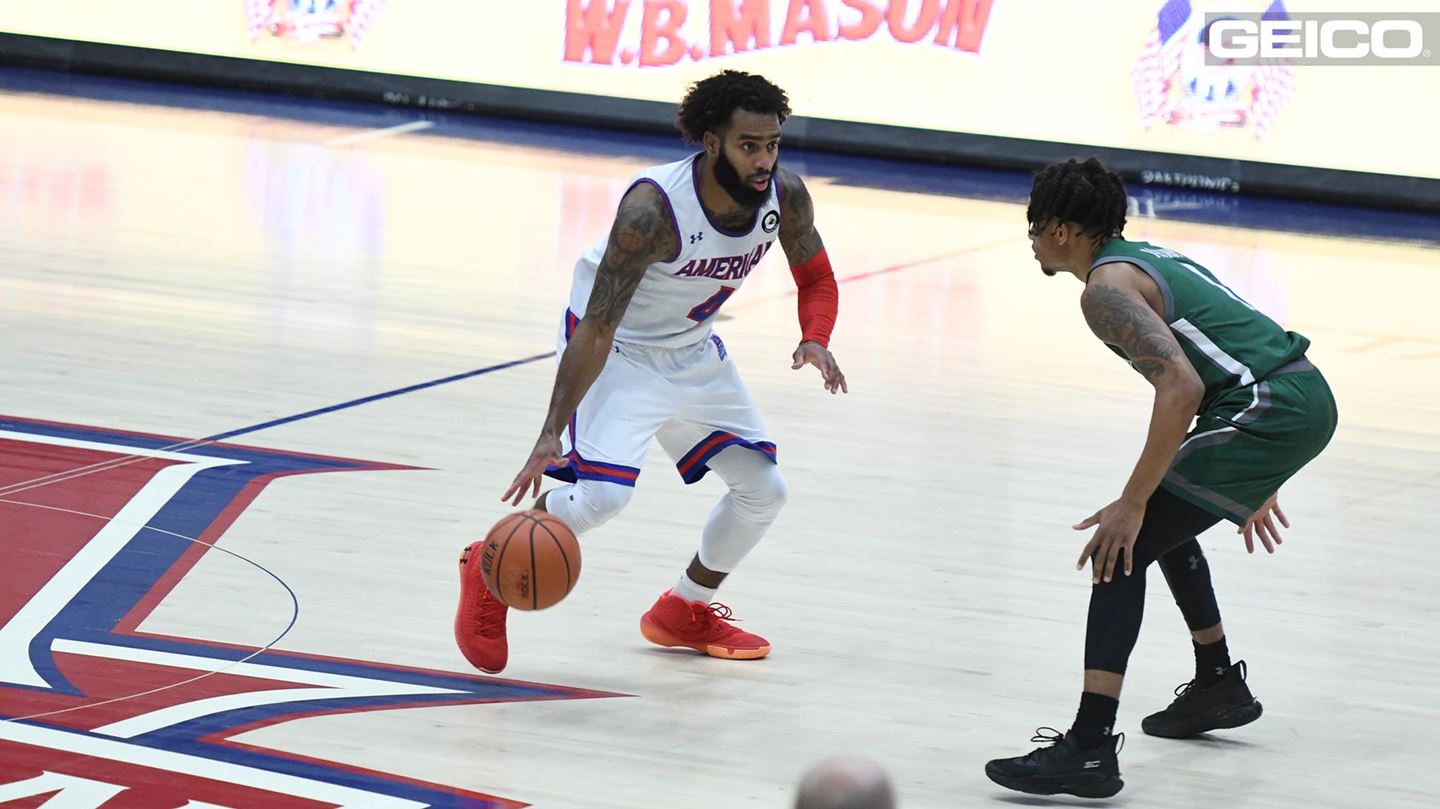 The first half of the Patriot League men’s basketball season has been… interesting, to say the least, with a conference leader many didn’t anticipate and some predicted contenders finding themselves in trouble early on.

Navy and Colgate have been dominant through the first four weeks of competition, with both looking like they could be on a collision course toward the conference finals. While Lafayette figured to be in the mix as well, a two-game sweep at the hands of rebounding Boston University left questions about the Leopards’ ability to close games.

On the other hand, Loyola and American have sought to find their footing after having to wait a few weeks longer than other teams to begin their seasons.

In this edition of the Power Rankings, Ethan Fuller and Hannah Yoshinaga try to make sense of the Patriot League at the sort-of midway mark of the season.

Colgate, as a team, is shooting 43% from 3 and 57% from 2. Raiders are 5-1 and have had 4 straight games postponed. They need to play 12 games to even get into the NCAAT conversation.
The @ColgateMBB situation:https://t.co/7cnSwTGhI2

Colgate hasn’t missed a beat this season — on average, the Raiders are scoring 90 points per game and allowing just 66.3. They’re dominating opponents in all facets of the game, whether it’s scoring, rebounding, sharing the ball or forcing turnovers. Coming up with a game plan to beat them is a tall order, and their only loss of the season was a 75-73 contest against Army on the first weekend of the season.

It’s hard to imagine what the Raiders could be doing much better. Even Colgate’s freshmen and young players have impressed, and they have one of the best bench scorers in the league in Jack Ferguson. In fact, the only opposing team that looks equipped to give Colgate a run for its money is #1 Navy. — Hannah Yoshinaga

In the first Star competition of the new year, Navy men's basketball took home the Star in a big win in Annapolis! #ArmyNavy | @USAA pic.twitter.com/u1qQzDkVlC

Most probably expected the Navy defense to keep the team in contention, but few probably expected the offense around Cam Davis to be as multifaceted as  it has been this season. The Midshipmen finally dropped a Patriot League game, losing 87-78 to Army. They’re at a tie for the top in the conference, and have the fourth-best scoring offense and second-best defense through eight games.

Navy has really helped its case by hustling on the glass; the team leads the Patriot League in offensive rebounds per game. Swingman Greg Summers is averaging nearly 7.6 rebounds per game, and others like Richard Njoku and Patrick Dorsey are getting involved as well. Navy isn’t loaded with shooters, so second chances are a big component of keeping this offense running.— Ethan Fuller

This week: January 30 vs. Loyola MD, January 31 at Loyola MD

Lafayette has just as much firepower as any team in the conference, led by the hot hands of Justin Jaworski and E.J. Stephens. The Leopards are scoring over 78 points per game on average, good for second best in the Patriot League. They don’t miss easy chances to put points on the board, as evidenced by their 81.1% free-throw shooting.

If there’s a concern about Lafayette, it’s the team’s ability to consistently pull ahead in close matches. While the Leopards came away with two two-point wins over Loyola Maryland, they’ve lost three other close matches to Lehigh and BU, both of which were struggling coming into those games. It could be an interesting issue to watch considering that Lafayette still has some tough opponents left on the schedule, including American and Navy. — Hannah Yoshinaga

HIGHLIGHT | The 9th 3-pointer couldn't have come at a better time. Jamir Harris wins it at the buzzer! 33 points and matches a school-record with 9 triples. #AUMBB | #BeAnEagle

While defense figured to be a strength for American heading into the season, we haven’t really had the chance to see just how much the Eagles can lock it down. They had to start their year off by matching up with Navy and Loyola Maryland, posing quite a challenge for a team coming off nearly a year-long break from NCAA games.

Jamir Harris and Stacy Beckton Jr. have put up big-time numbers for the team thus far, averaging over 35 combined points. They’ve been especially hot from deep, where Beckton is shooting over 50% and Harris is making 48.6% of his shots. Johnny O’Neill and Josh Alexander have also been in double digits, making the Eagles’ offensive attack even more dynamic.

American has one of the toughest schedules in the conference, so things won’t get easier for them moving forward. However, fighting through difficult matchups in the regular season can only help them when it comes to preparing for the playoffs. — Hannah Yoshinaga

This weekend's games against Colgate have been postponed.

No make up dates have been set at this time. https://t.co/bXNvE66xRe

Army picked up its most impressive win of the season last weekend with an 87-78 victory over rival Navy, which was unbeaten heading into the contest. The Black Knights held Mids star Cam Davis to just 4-of-19 shooting for 13 points, giving them a chance to win even after squandering a first-half lead.

That level of defense isn’t new for Army either; after giving up 101 points to Colgate in their first conference game, they’ve allowed opponents to reach the 70-point mark only twice.

If Army can improve, it’s on offense, although they still rank fourth in the conference there too. If the Black Knights can learn to share the ball more, they’re well-equipped to make strides on that end. — Hannah Yoshinaga

Talk about a roller coaster. The Terriers yanked their ship back on course with a weekend sweep of a good Lafayette team — then had their entire athletics program go on pause for at least the rest of January. Just when we finally saw a completely healthy BU team, the pandemic strikes again.

So how do we grade the Terriers at the midseason point? How much do we weigh this past weekend, with proper lineups and players in place, versus the dreadful five-game losing streak? How do we compare their experienced roster with a defending champion pedigree versus their league-worst scoring offense to date? We need a larger sample size, to be honest, so BU sits near the middle for now.— Ethan Fuller

What a heartbreaking way to start the season. The Greyhounds are mired in a four-game losing streak, with all four of those losses coming by a combined seven points. Jamir Harris’ 3OT buzzer-beating win is a knife to the heart of a team that has played well against two quality teams so far.

This isn’t really the midway mark of the season for Loyola Maryland. But despite the dip in our rankings, fans should be optimistic about the rest of the Greyhounds’ slate. Santi Aldama has been awesome, to the tune of: 19.5 points, 8.5 rebounds, 3.5 assists, 1.8 blocks and a steal per game. And he’s not even hitting threes yet!— Ethan Fuller

🚨UPDATE🚨
This weekend's @Bucknell_MBB & @Bucknell_WBB games vs. Lehigh are back on as scheduled. The COVID-19 test results previously announced as positive have been amended to negative results by the testing lab after discovery of a recording error. https://t.co/vkIiM9fwzk

Bucknell didn’t play last week after registering a positive COVID-19 test that turned out to be an error. So the Bison will be back this week against Lehigh, hopefully with another week of tune-up complete for leading forward John Meeks.  After sweeping the Mountain Hawks two weeks ago, Bucknell should be feeling good about the rematches.

Meeks is a life vest for the Bucknell offense, which is one of the worst in the league without the senior scorer. At just 42.5 percent shooting as a team, the Bison don’t have any consistency outside of Meeks, hence the four-game losing streak to start the season. We’ll see if they can corral some efficient scoring in the second half. — Ethan Fuller

This week: January 30 at Lehigh, January 31 vs. Lehigh

The Mountain Hawks dug themselves out of the last spot by beating Holy Cross twice over last weekend. They got two really nice games from sophomore Evan Taylor, who logged double-doubles in both wins and is improving quickly as a sophomore. Taylor has started the last three games and averaged 15 points and 8.7 rebounds in that span.

Lehigh needs support from guys like Taylor as they try to turn this season around. The offense is ranked eighth in the conference because of the inconsistency from Marques Wilson and Reed Fenton, among others. Bucknell, Lafayette, Loyola Maryland and Colgate round out the schedule — quite a gauntlet. — Ethan Fuller

This week: January 30 vs. Bucknell, January 31 at Bucknell

The @HCrossMBB and @HCrossWBB games against Boston University this weekend have been postponed. @HCrossMBB will now face Colgate at home on Saturday and Sunday.https://t.co/LySHs9E1xP

The Crusaders got off to a strong start considering the low expectations many had for Holy Cross heading into the season, but they’ve since cooled off and struggled to keep up in the tough Patriot League North division.

Defense has been a big problem for the Crusaders, where they lack the size to compete with other teams in the conference and must rely on rookies to take on significant roles. They’re giving up over 80 points per game on average, which isn’t going to cut it.

On the bright side, Holy Cross’ rookies are getting more experience than many other freshmen in the league. The team also looks to have found a leader moving forward in Gerrale Gates. Between those two things, the future looks bright in Worcester. — Hannah Yoshinaga