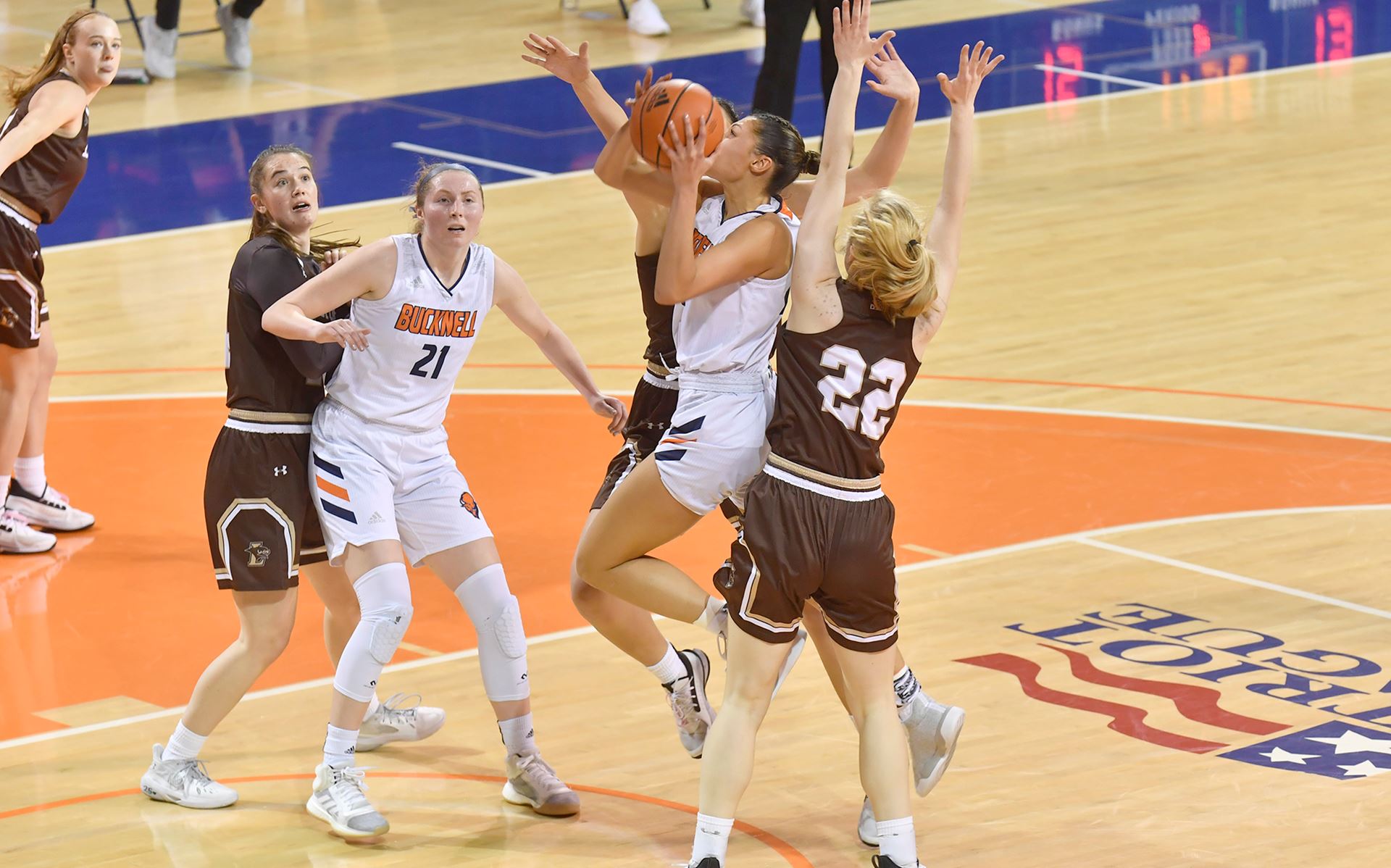 Health and safety protocol-related cancelations continue to wreak havoc across college basketball, and the Patriot League hasn’t been immune. Lafayette spent the week on the shelf after registering a positive test, while Navy and Loyola Maryland have yet to play more than two conference games.

On the flip side, the battles between the conference’s top teams continue to be ferocious. The Lehigh-Bucknell matchup was a marquee series, giving us a better look at where Lehigh belongs in the league hierarchy. While Bucknell powered its way to a 6-0 record, the Terriers lost their streak of five games after stumbling against Army.

In the latest edition of the power rankings, Ethan Fuller and Hannah Yoshinaga choose a player from each team who’s caught their attention so far.

Congrats to Tessa Brugler‼️ She's been named the @PatriotLeague Player of the Week after posting back-to-back double-doubles vs. Lehigh! #rayBucknell | #TST

Another week, another sweep for the best team in Patriot League basketball. Bucknell faced its toughest challenge so far in a high-powered Lehigh offense, and they still rolled to two double-digit wins. What’s left of the schedule includes one more series against Lehigh and an inter-pod battle with American. There’s a very real chance the Bison run the table.

Brugler has been the fulcrum inside so far, averaging 12.5 points, 10.8 rebounds and 2.2 assists per game. She’s smooth, methodical and proficient inside, and was named Player of the Week this week for posting two double-doubles against the Mountain Hawks. — Ethan Fuller

BU dropped its first contest of the season, a 54-43 loss to Army in which the offense grinded to a halt. It’s still an impressive start for the Terriers, who have a week off due to COVID-related consequences in the Lafayette program. But some of the possessions bore similar resemblance to 2019-20’s inconsistencies. One player who seems above all of that is star senior Katie Nelson.

The point guard has frankly been on a tear to open 2021: career highs in points (14.8) and assists (5.0) per game, along with field goal percentage (58.9), three-point percentage (50.0), and assist-to-turnover ratio (nearly 3:1). Nelson has moved from a steady presence with flashes of scoring to a serious threat at all levels. She’s played her way into the Player of the Year conversation.

We asked last week if the Mountain Hawks should be considered in the elite tier of championship contenders. After last weekend against Bucknell, the answer is: not yet. Lehigh’s perimeter-centric offense is great when it’s on, but when it isn’t the Mountain Hawks don’t have anyone who can consistently get buckets inside. While most of the leading scorers have balanced hot and cold outings, Claire Steele has been one performer who consistently helps the team.

Steele has continued her progression as a do-it-all guard into her junior year. Right now she’s averaging 8.7 points, 4.5 assists, 3.2 rebounds and 1.8 steals per game. Steele isn’t the top scoring option or a highlight maker, but she contributes in an number of areas for Lehigh. — Ethan Fuller

Through four games, Edwards has been on fire yet again. She’s averaging 22 points per game, more than double anyone else on the team, in addition to posting 8.5 rebounds, 3.75 steals and three assists per contest. While she hasn’t quite hit her stride scoring from deep, she’s getting to the rim and shooting over 50% from the floor.

Although her contributions on offense are the focal point of her game, her defense will be even more valuable to American moving forward. The Eagles have given up nearly 80 points on average in their three losses, which won’t cut it if they want to come out on top in their upcoming matchups against Lehigh and Bucknell. — Hannah Yoshinaga

This week: January 23 at Loyola MD, January 24 vs. Loyola MD

Although her shooting has been inconsistent at times, Power-Cassidy has played well through Holy Cross’ first six games. Power-Cassidy has slotted into the Crusaders’ starting lineup and used her previous FIBA experience to transition to NCAA-level basketball without much issue.

She’s been the team’s best three-point shooter, stretching the floor and giving the Crusaders’ paint players more room to work and figure out their new roles. She’s also made an impact on Holy Cross’ defense by cleaning the glass and leading the team in blocks. It will be interesting to see if she can keep up the production as the team moves into a more difficult part of its schedule. — Hannah Yoshinaga

This week: January 23 at Lehigh, January 24 at Lehigh

It would be impossible not to choose Kucowski here because of the simply inhuman numbers she puts up every game no matter what opposing defenses throw at her. Kucowski has long forced teams to game plan specifically for her, and nothing has changed this season. Even in four bad losses for the Leopards, Kucowski averaged 14.0 points, 13.8 rebounds, 3.8 assists, 2.5 blocks and 1.5 steals per game.

Kucowski’s numbers should only increase as the season goes on and she’s able to get into more of a rhythm, but, as has been the case throughout her Lafayette tenure, the question is how much help she’s going to get from teammates. Either way, Kucowksi is practically a shoo-in for all-league honors. — Hannah Yoshinaga

She has scored the last seven points for the Black Knights!

The Black Knights’ leader hasn’t disappointed in her third season. Fallon has served as Army’s lead playmaker for nearly 35 minutes per game while also being one of the team’s stronger defenders and grabbing almost nine rebounds per game.

It’s hard to imagine where Army would be without her contributions, but her leadership and willingness to put forth full effort on both ends of the floor has undoubtedly had an impact on the Black Knights’ younger players. Considering that Army has only two seniors on the roster and can expect Fallon back, the future is bright for the team. — Hannah Yoshinaga

The freshman guard has packed a punch coming off the bench, ranking as the third-leading scorer on the team despite not registering a start. Blackmore also leads the team in assists and is capable of directing the offense when the ball isn’t in Alexa Brodie or Keelah Dixon’s hands. What might be even more important is how careful she is with the ball, as she hasn’t turned the ball over yet this season.

Big performances like Blackmore’s will be key for the Raiders moving forward considering the lack of experience on their roster. Her collected presence can only help Colgate moving forward as they look to improve on their 1-5 record. — Hannah Yoshinaga

Navy finally got on the board last week with a quality 70-67 win over American. The Mids were at the bottom of our Power Rankings and move up sort of by default, but they should still feel good about a series split with the Eagles. Junior guard Kolbi Green had a monster 25-point game that propelled the Mids in Sunday’s victory.

Jennifer Coleman is the game-changer to watch for Navy. Due to academic eligibility reasons, she missed nearly the entire conference slate last season. But so far, Coleman is averaging 16 points, nine rebounds and five assists through two conference games. She has a monster 19.3-points, 9.3-rebound, 5.8-assist-per-game stat line in total for 2020-21. Coleman is an All-PL player who can singlehandedly raise Navy’s ceiling. — Ethan Fuller

We have a two-game sample to assess the Greyhounds, who still haven’t played since taking a beating at the hands of Bucknell on opening weekend. There’s not much to say that hasn’t already been addressed, so we’ll again spotlight sophomore Emily McAteer. She’s put up a nice 8.5 points, 8.0 rebounds and 2.5 blocks per game this season, and should be one of the stout interior forces in the conference. We’ll she if she can take advantage of a similarly young American frontcourt. — Ethan Fuller

This week: January 23 vs. American, January 24 at American