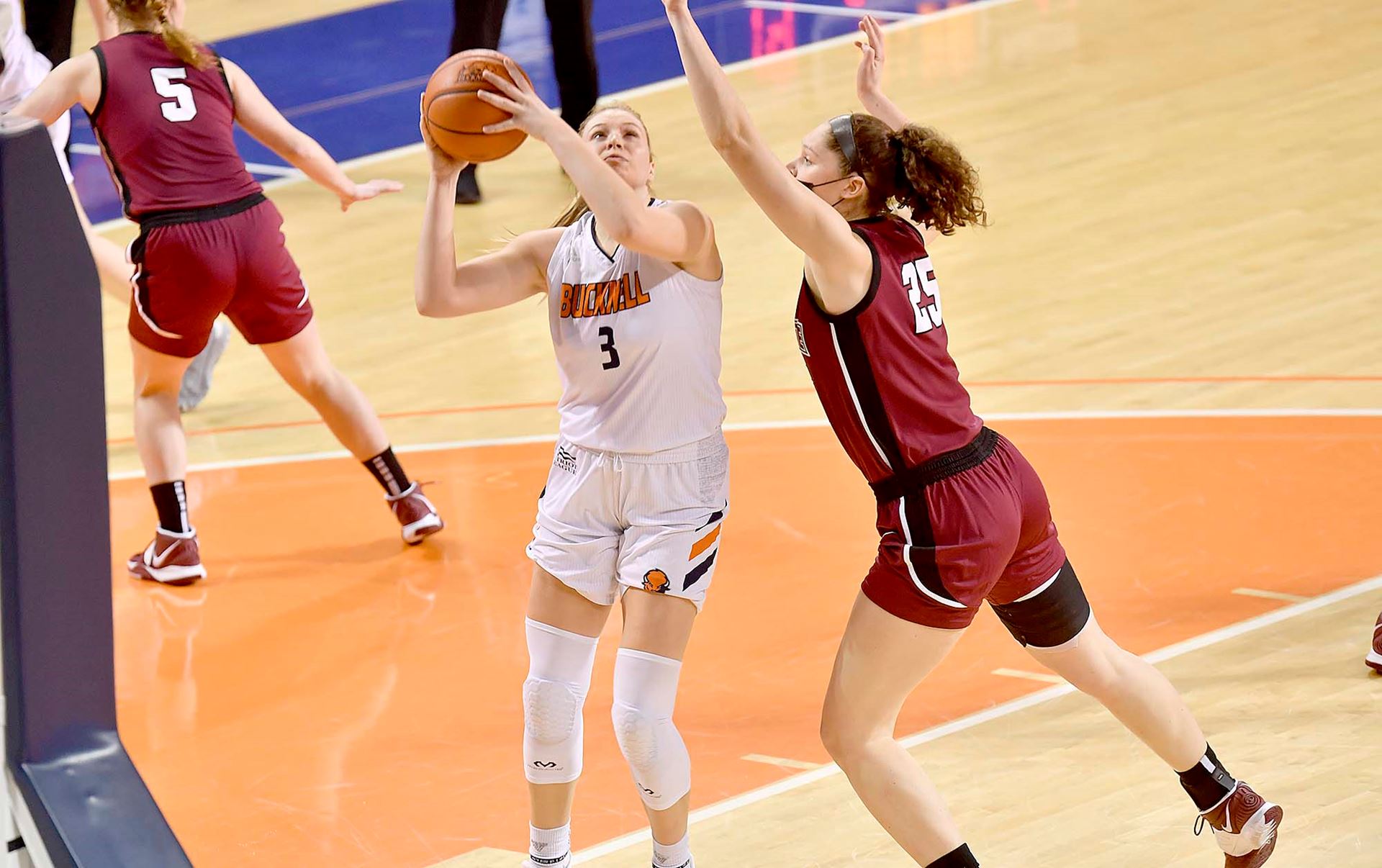 The divide between the top two teams in the conference and everyone else remained clear this weekend with undefeated Bucknell and BU trouncing their opponents. However, Lehigh made its case to break into the top tier by picking up two wins against a talented American University squad.

After looking lost in week one, Holy Cross showed poise in a two-game sweep of Army in what was believed to be the first matchup between father and daughter head coaches. As a result, Holy Cross was the only team to rise in the rankings this week.

For this week’s edition of the power rankings, WTBU’s Ethan Fuller and Hannah Yoshinaga asked their biggest questions about each Patriot League team after the first few weeks of the season.

Biggest question: How does this team lose?

Bucknell is making college basketball look way too easy. The Bison disposed of Natalie Kucowski and Lafayette with two 25-plus-point drubbings. Trevor Woodruff’s squad has yet to win a game by less than 15 points, and the contributions are coming from everywhere.

Taylor O’Brien, Tessa Brugler and Abby Kapp have each turned in a dominating performance and they’re all averaging at least 10 points per game. They lead the second-best scoring offense and the best scoring defense in conference play (excluding Navy). With a high-octane showdown against Lehigh coming up, the defending top seed faces its toughest challenge of the season.— Ethan Fuller

This week: January 16 at Lehigh, January 17 vs. Lehigh

Biggest question: What happens when the shooting percentages go down?

The Terriers are currently canning over 50 percent of their field goals, good for tops in the Patriot League. Behind Katie Nelson and her unreal 72 percent field goal rate, BU is overwhelming opposing defenses en route to a 4-0 start. But it’s not just Nelson who has caught fire. Maren Durant and Riley Childs are both shooting above 68 percent from the field, and Sydney Johnson is at an easy 50 percent so far.

These numbers are destined to regress, but other players could step up — namely Maggie Pina and Emily Esposito. But we saw at the end of BU’s 62-58 win over Colgate that the Terrier offense can stall if no one attacks the paint to collapse opposing defenses. Sydney Johnson is the team’s best slasher, but others have to get aggressive and make defenders uncomfortable. — Ethan Fuller

#ICYMI (and we’re not sure how you could), the Mountain Hawks converted 1️⃣6️⃣ 3-pointers on Monday afternoon, a new program record and @PatriotLeague-tying record.

Biggest question: Are the Mountain Hawks a Tier 1 team?

All season long, we’ve talked about Bucknell and Boston University as the clear alphas of the Patriot League. But three teams have started off 4-0, and Lehigh has taken the toughest road of the trio. The Mountain Hawks most recently dispatched American in the Eagles’ season-opening slate with two high-scoring wins. Freshman guard Mackenzie Kramer earned Rookie of the Week honors with a 21-point outburst in the first contest and an 11-point effort in the second game. The Mountain Hawks have four players averaging double-digit points and boast an electric offense.

This week features the best matchup of the young season as two 4-0 teams square off. If the Mountain Hawks can steal even one game from the powerhouse Bison, they’ll earn the title of championship contender. But beating Bucknell is always easier said than done. — Ethan Fuller

This week: January 16 vs. Bucknell, January 17 at Bucknell

All in a day's work for @jedwards_08 as she earns the 1️⃣st @PatriotLeague Player of the Week this season for #AUWBB!

Biggest question: Do the Eagles have enough defense to push them over the edge?

The Eagles were a few steps slow on defense against a hot Lehigh team this weekend, giving up 79 points in game one and 89 points in game two. They had a tough time getting the ball out of the Mountain Hawks’ hands and were unable to stop Lehigh from beyond the arc. They also didn’t have the height to contest shots in the paint and finished with only one block across both games.

While all of that is to be expected after such a long layoff from playing games, the Eagles could have a lot of catching up to do as they move through the season. Even with a scoring talent like Jade Edwards (averaging 23.5 ppg), they don’t want to find themselves in a shootout every weekend. — Hannah Yoshinaga

Despite this afternoons loss, Ganpo had an impressive day with a career-high 16 points and a season-high seven rebounds.

We stay on the road for Saturday's game, taking on Loyola in Baltimore at 1 p.m.

Biggest question: Is Lafayette a contender?

To put it frankly, Lafayette has not looked great or lived up to expectations. After coming into the season looking like they were finally ready to make some waves behind Natalie Kucowski, the Leopards absolutely wilted against Lehigh and Bucknell. Lafayette managed just 51 and 45 points last weekend facing a sharp Bison defense, calling into question whether or not they’ll be able to make adjustments when defenses don’t allow them to feed Kucowski in the post or get comfortable looks from three.

It doesn’t help that their defense gives up 78.3 points per game. The Leopards are going to have a hard time winning if they can’t start locking some opposing shooters down, especially considering that they still have series against BU, Lehigh, American and Bucknell remaining. — Hannah Yoshinaga

This week: January 16 at Loyola MD, January 17 vs. Loyola MD

Biggest question: Can Alexa Brodie keep this up?

With the exception of their second game against BU, the Raiders’ defense has been porous, so their offense will have to step up to give them a chance. While senior Keelah Dixon started off the season on a tear, sophomore Alexa Brodie has shown herself to be a far more reliable scorer and director of the offense.

Brodie currently leads the team with 16.3 points per game and 58.3% shooting from three. She’s also drawing fouls and getting to the free-throw line, with 16 free throw attempts in four games. Her ability to lead the team on offense, get her teammates involved and not turn the ball over has kept her on the floor for an average of 35 minutes per game. Those numbers are all big steps up from last season, but if she can keep it up, this is her team. — Hannah Yoshinaga

SO PROUD of the Toughness and Spirit of this Team 💪🏻 💪🏻Grateful for such a memorable weekend!! 💜💜💜 #GoCrossGo https://t.co/K4wKBA25zm

Biggest question: Can Avery LaBarbera score efficiently as the centerpiece of the offense?

Avery LaBarbera’s shooting efficiency has dipped significantly this season now that opposing defenses can focus all of their attention on her. She’s shooting just 32.2% from the field, and her best stat line of the season thus far is a 9-for-23 day against an inexperienced Army team. BU and Army figured out how to adjust to her fairly quickly, and she was much less effective in the second game of each series.

It doesn’t look like the pressure on her is about to ease up any time soon either, as her teammates haven’t shown up consistently and forced opposing defenses to treat them like serious threats to score. LaBarbera should be able to find ways to elevate her game on her own, but her ability to make big improvements depends at least partly on how much help she gets from her teammates. — Hannah Yoshinaga

The Black Knights fall in Worcester to Holy Cross

Back in action on Jan. 16 vs. Boston University #GoArmy | #IGotYourSix pic.twitter.com/u2hXYfl6r8

Biggest question: Which of Army’s two defenses are we going to see going forward?

Holy Cross Head Coach Maureen Magarity had the upper hand this weekend in the first coaching showdown between her and her father Dave Magarity, Army’s head coach. The Crusaders swept the Black Knights, who have been all over the place on defense and gave up 80 points in game one.

Army’s hot-cold performance on the defensive end has rendered much of their offensive efforts irrelevant. In their first eight games, the Black Knights gave up at least 80 points in all their losses and allowed no more than 55 points in their wins. It’s tough to predict how Army’s season could pan out not knowing which extreme they’ll find themselves at when they step onto the court.

Some of the inconsistency should resolve itself with time since the Black Knights are a younger group, but they still have a lot of work to do and discipline to learn. — Hannah Yoshinaga

Tragically, we did not get to see a Battle of the Basement this weekend. Loyola Maryland had its weekend postponed and instead will take on Lafayette next. Initially, this seemed like a tough test for our ninth-ranked team, but the Leopards have yet to win a game this season. The Greyhounds could pounce on reeling Lafayette if they can contain Natalie Kucowski.

The pressure is on sophomore Emily McAteer. She cracked the All-Rookie team last year and has continued her growth into a defensive anchor and glass-cleaner. McAteer has five blocks in just two games, but defending the three-level scoring Kucowski brings each night is an otherworldly challenge.— Ethan Fuller

This week: January 16 vs. Lafayette, January 17 at Lafayette

Will we finally get to watch Navy play conference hoops? There’s not much to analyze with this squad, who has been sidelined with COVID-related complications for two weeks. The Mids will host a solid Eagles team led by Jade Edwards, who lit up Lehigh after an extended break for American. Hopefully we have some games to break down here next week.— Ethan Fuller

This week: January 16 at American, January 17 vs. American