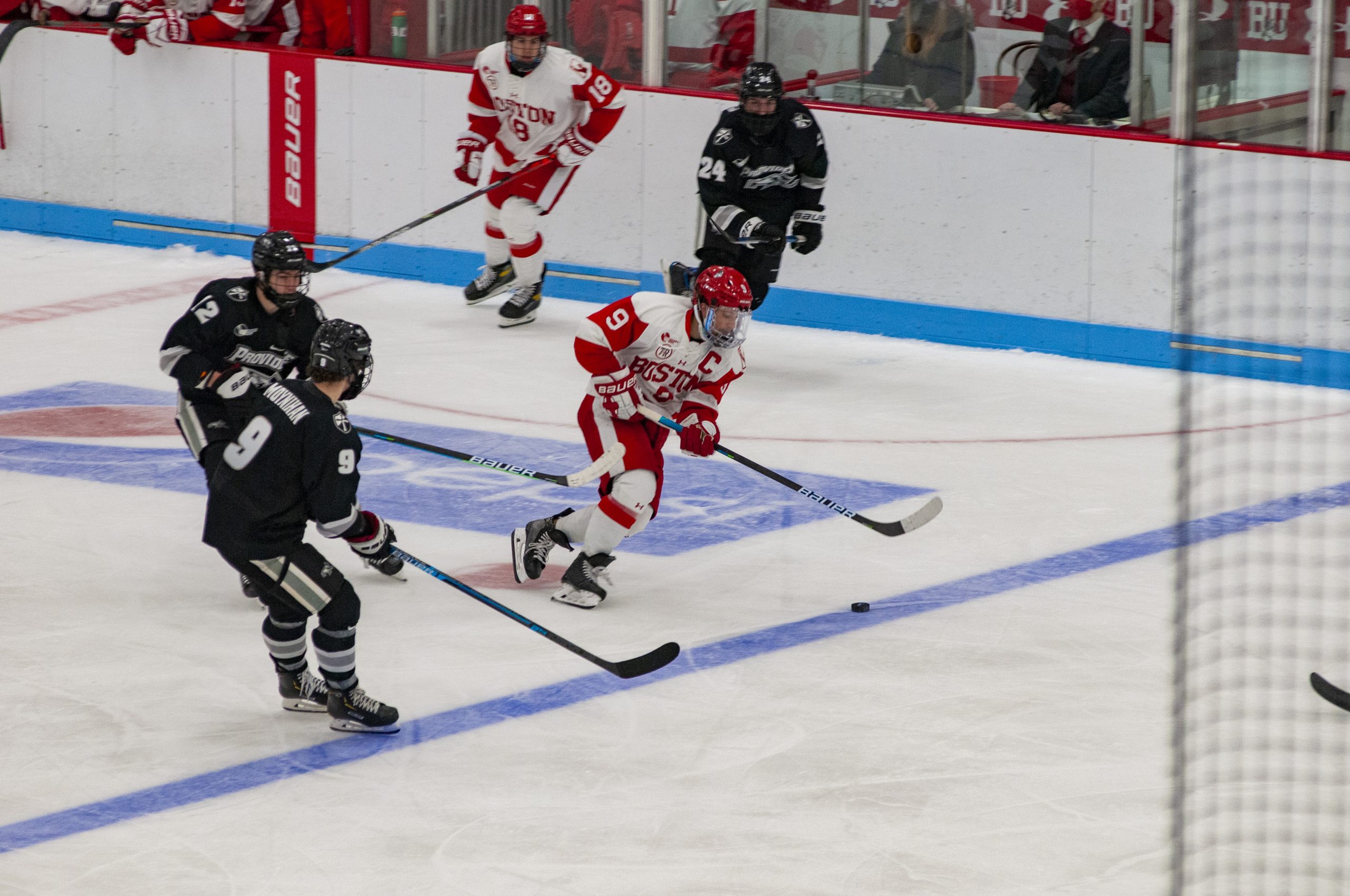 PROVIDENCE, R.I. – The Boston University Terriers (1-1-0) earned their first win of the season against the No. 16 Providence Friars (4-4-2) by a score of 6-4 at Schneider Arena on Saturday night.

For the Terriers, it was their first win since March 6 where BU shut-out Northeastern, 3-0.

“To get a win tonight, it’s just terrific,” said BU head coach Albie O’Connell. “Especially some of the lessons we learned – good and bad. I think we found our game in pretty good pockets tonight.”

“On balance, we played a lot better game. We did not have quite the same amount of mistakes coming out of our own zone.”

Both BU’s freshman goaltender, Drew Commesso, and PC’s sophomore goaltender, Jaxon Stauber, were back between the pipes for their respective teams. Commesso recorded 32 saves on 36 shots, while Stauber tallied 14 saves on 19 shots.

Less than a minute later, Farrance earned his second point of the game with a power play goal. Assisted by senior captain Logan Cockerill, Farrance one-timed Cockerill’s pass at the point to give the Terriers a two-goal lead.

It's a power play goal!

“I think [Farrance] is the best player in college hockey,” O’Connell said. “He’s got the ability to change a game, control the play, [and] make a difference off the rush . . . I’m really happy that we have him, but even more happy for him when he has success.”

BU would score again on the man-advantage just over two minutes later.

Sophomore forward Jay O’Brien dropped to his knee on the left face-off dot to one-time a pass from sophmore defenseman Domenick Fensore. The goal was BU’s third in the opening seven minutes of play.

Not to be outdone on the power play, Providence would answer with two man-advantage goals of their own.

Freshman defenseman Uula Ruikka opened the scoring for the Friars 13:43 into the first period. Junior defenseman Michael Callahan crossed a pass through the slot to an open Ruikka at the right face-off dot. Ruikka one-timed it over the glove-side of Commesso to get Providence on the board.

Less than a minute later, the Friars would bring the score within one goal, while on the man-advantage yet again.

Thompson received a cross pass from senior blueliner Ben Miragaes, only to squeeze a one-timer through the five-hole of Commesso to pull the Friars within one goal.

Amidst all the chaos of the opening period, Cockerill went on to score a short-handed goal with under six minutes remaining. From the defensive blue line, the senior forward carried the puck down the ice and shot five-hole on Stauber.

And just like that, a short handed goal for the Terriers. Logan Cockerill on the breakaway. BU leads 4-2. #BUvsPC pic.twitter.com/udRudf0OWf

The second stanza saw a pair of goals by the Friars as an attempt to even the score, but a BU goal kept the Terriers ahead by one.

Sophomore Craig Needham received a nifty, cross-ice pass through the neutral zone from Miragaes. Needham was able to skate in all alone along the right side-boards, and shot it top-right-shelf over the glove of Commesso to pull the Friars within one 4:23 into the second period.

The Terriers continued to pressure the Friars in the offensive zone, and their work paid off. Sophomore forward Markus Boguslavsky tipped in a shot from sophomore defenseman Alex Vlasic from the point to earn himself his first collegiate goal.

Markus Boguslavsky gives the Terriers another two-goal cushion. He tips in a shot from Alex Vlasic at the point.

In a series of back-and-forth goals by both teams, the Friars pulled back within a goal 14:16 into the second period. After Needham’s shot was interrupted from behind by BU freshman forward Dylan Peterson, the loose puck found a trailing junior forward Matt Koopman who was able to shoot five-hole on Commesso.

For 19 minutes and 58.5 seconds of the third period, play was pretty much even. Both teams continued to apply pressure, and both had plenty of opportunities to score. But, both goaltenders stood firm to keep the puck out of the back of their net.

With less than two minutes remaining in the game, Providence pulled their netminder for the extra attacker. But the extra man was not enough for the Friars, and instead the Terriers used the empty net to their advantage as Cockerill scored his second of the game with 1.5 seconds remaining, sealing the victory for BU.

After the game, O’Connell credited the training staff for getting his team recovered from the night prior.

“We have to give kudos to our strength coach and our strength staff,” said O’Connell. “That was a big thing – a big focus – going into the game.”

“Guys did a pretty good job of taking care of themselves – eating the right things, and having a good workout this morning – to get their legs back. Kudos to our staff, and our strength and conditioning program.”

The Terriers are back in action on Jan. 15 against UMass Lowell (3-1-0) at Walter Brown Arena. Puck drop is scheduled for 6 p.m.